Pro-life Pennsylvania Rep. Tim Murphy will not seek re-election at the end of his term next year in the wake of reports that he urged his mistress to have an abortion.

“After discussions with my family and staff, I have come to the decision that I will not seek reelection to Congress at the end of my current term,” the Republican lawmaker said Wednesday in a statement to Pittsburgh radio station KDKA. “In the coming weeks I will take personal time to seek help as my family and I continue to work through our personal difficulties and seek healing.”

Murphy had already acknowledged an affair with a “personal friend” and apologized last month, but a Tuesday report from the Pittsburgh Post-Gazette suggested that he asked the woman to get an abortion despite his staunch pro-life stance.

“… You have zero issue posting your pro-life stance all over the place when you had no issue asking me to abort our unborn child just last week when we thought that was one of the options,” a January text message from the woman obtained by the paper read.

“I get what you say about my March for life messages,” a text message in response from Murphy’s number reads. “I’ve never written them. Staff does them. I read them and winced. I told staff don’t write any more. I will.” Ultimately, it turned out that the woman was not actually pregnant despite Murphy and her thinking that she was at the time.

Earlier Wednesday, Murphy met with Speaker of the House Paul Ryan to discuss his political future, according to Politico. A number of Republican leaders urged the Congressman to step down, the report reads.

Murphy is a member of the House Pro-Life Caucus and has been endorsed by anti-abortion group LifePAC. 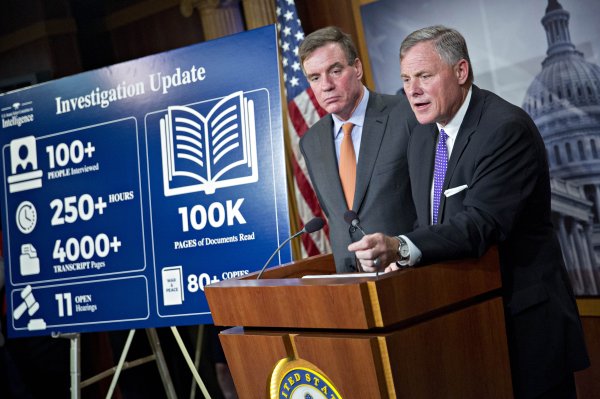 Congress Still Investigating 'Issue of Collusion' With Russia
Next Up: Editor's Pick