Here's Everything Google Just Announced at Its Pixel 2 Event

If Google made one thing clear at its event on Wednesday, it’s that it wants its artificially intelligent virtual assistant to be everywhere, from phones to smart earbuds and laptops. Google unveiled several new products on Wednesday, many of which rely on its Google Assistant to provide compelling features that differentiate them from competing gadgets.

Here’s a look at everything Google just announced.

Google’s new Pixel smartphones were the stars of Wednesday’s show. The new phones, one of which includes a 5-inch display and the other which has a 6-inch screen, both include improved displays and cameras. The Pixel now has an OLED screen, which is typically better at displaying contrast than older LCD screens, and a new design that allows the screen to occupy more space on the front of the phone.

The Pixel 2’s 12-megapixel camera includes a few new features that help it better compete with Apple’s forthcoming iPhone X. For instance, the Pixel’s camera can slightly blur the foreground to make the subject pop, just like Apple’s Portrait Mode. And those who own Google’s Pixel phones will be the first to try Google Lens, a feature that can conjure information about real-world objects simply by pointing the phone’s camera at them.

The company’s voice helper, Google Assistant, has always been a large part of what made the original Pixel stand out. But now that Google’s digital helper is available on so many phones, the company’s adding a few extras that highlight its strengths on Pixel. On the Pixel 2, for example, users can summon the Assistant by squeezing the sides of the phone rather than pushing a button or speaking.

Google debuted a brand new laptop at the event called the Pixelbook: a $999 Chromebook with a 12.3-inch screen (like Microsoft’s Surface Pro) that’s meant to function as both a laptop and a tablet. Like all Chromebooks, the Pixelbook runs on Google’s Chrome OS, which is designed to work best with an Internet connection. It’s also the first laptop that comes with the Google Assistant, which you can interact with by speaking, typing, or using the company’s new $99 stylus. With that stylus, which Google calls a Pixelbook Pen, you can mark up content shown on screen to obtain more information from the Google Assistant.

Apple and Amazon are gearing up to release new high-end speakers, so Google taking a swing at the category makes sense. Its new $399 Google Home Max distinguishes itself by intelligently adjusting its audio settings based on its surroundings. Google calls the new feature Smart Sound, and it can acoustically “tune” itself based on its location in a given space. Slide the Max a few feet from its current location, for example, and the speaker will self-optimize for its new position.

Google also claims the Home Max will offer deeper bass powered by dual 4.5-inch woofers, and says it’s 20 times more powerful than the original Google Home. The Home Max clearly intended to compete with Apple’s HomePod and Amazon’s new Echo, both of which were created with superior audio quality in mind. It’s especially similar to the HomePod speaker Apple unveiled in June, which can also dynamically adjust audio to coincide with its surroundings.

Google unveiled a smaller Home model on Wednesday as well, known as the Mini. As its name implies, it’s a shrunken-down, donut-sized version of Google’s smart speaker priced at $49 — just like Amazon’s Echo Dot. The Home Mini looks like a tiny pod with fabric strewn across the top, a design that’s meant to give it a warmer look when placed in living areas. There are four LED lights underneath this material that glow to indicate the device is listening, and it’s available in three colors: chalk, charcoal and coral.

Google wants its new audio earbuds to also become your own personal language translator. The Pixel Buds, priced at $159, can be used to summon the Google Assistant with a tap. But what really makes them stand out is their ability to translate language in real time when used in conjunction with your phone.

You could say “Help me speak Italian,” for instance, and your phone would render whatever you next said into Italian to a nearby friend or associate, the phrases dictated to them through your phone’s speaker. When your friend responds in Italian, you’ll hear the English translation through Google’s Pixel Buds.

The Pixel Buds work with 40 languages, and will be available in the U.S. in November.

Google’s new Clips gizmo is a smart camera that’s designed to snap photos for you. The tiny $249 device, which can be laid on a surface or clipped onto clothing or furniture, uses artificial intelligence to automatically detect when a photo should be taken. The company claims the camera will learn to recognize your friends and family members over time, enabling it to get better at capturing images during opportune moments. All of the artificial intelligence happens on the device, Google says, meaning none of the data obtained by Clips is sent to the cloud.

Google also announced a handful of new features coming to the Google Assistant over the next few months. Google will be adding new child-friendly voice interactions that feature characters like Mickey Mouse, educational trivia games and bedtime stories. Google is also making its Assistant work more fluidly across multiple devices when it comes to managing routines. That includes closer compatibility with smart home devices, particularly those made by Nest, so that you can just say a phrase like “I’m home,” to trigger your smart lights and thermostat. 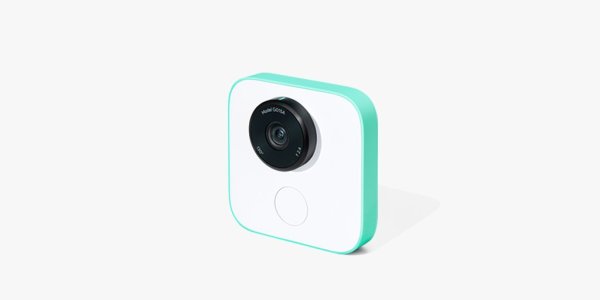 Google Just Announced a Smart Camera That Takes Photos For You
Next Up: Editor's Pick