FBI agents met Danley when she got off her flight from the Philippines Tuesday and the sheriff said she was “a person of interest” in the case, according to the Associated Press. Las Vegas Metropolitan Police Sheriff Joseph Lombardo also told the AP that they “anticipate some information from her shortly.” Lombardo added that he is confident they’ll find out what set Paddock off and led him to kill at least 59 people at an outdoor concert on the Las Vegas Strip Sunday night.

Here’s we know so far about Marilou Danley.

Who is Marilou Danley?

Danley, 62, was Paddock’s girlfriend for a number of years. She was born in the Philippines and also lived in Australia, where she later became a citizen of the country and married Geary Danley, an auditor for FedEx, according to the New York Times,

Danley and her husband moved to Memphis and later retired to Nevada, and was married 25 years, according to the Times. Marilou and Geary Danley divorced in 2015, and she listed Paddock’s condo in Reno as her address when signing the documents, the Times reported.

John Weinreich, who worked as an executive casino host at the Atlantis Casino Resort Spa said Danley often attended to Paddock when she worked in the Reno casino. “Then she was just gone one day. I asked some fellow workers and they said she went off with Stephen,” Weinreich told the Times.

Law enforcement also said that Paddock wired $100,000 to the Philippines, which authorities are still trying to trace. They have not said whether or not there is any connection between the wire transfer and Danley. Paddock was also a high-stakes gambler betting more than $10,000 a day.

Where was Marilou Danley the night of the shooting?

Danley was out of the U.S. when the shooting took place, according to the AP, and was in the Philippines on Tuesday. In an interview wth 7 News Sydney, a woman identified as her sister said Paddock sent her away unexpectedly and said he found “a cheap ticket.”

Has Marilou Danley’s family spoken out?

“He sent her away, so that he can plan what he is planning without interruptions. In that sense, I thank him for sparing my sister’s life. But that won’t be to compensate 59 people’s lives.”

Danley’s former step-daughter Dionne Waltrip, and daughter of Geary Danley, said she was shocked to see her connected to the shooting.

“She’s probably one of the most happy, outgoing, full-of-life people I’ve ever known,” Waltrip told the Times. 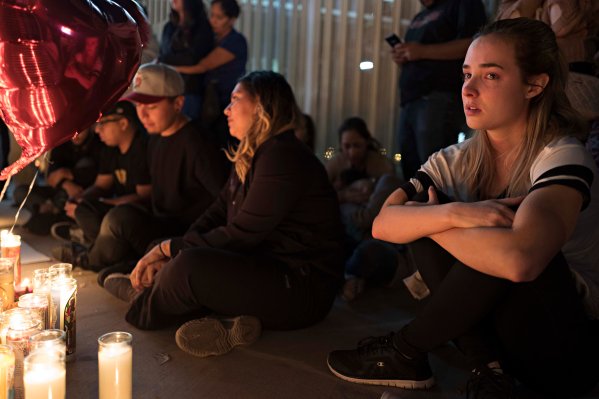 Victims Watched a Familiar Horror Unfold in Las Vegas
Next Up: Editor's Pick