People run from the Route 91 Harvest country music festival after apparent gun fire was hear on October 1, 2017 in Las Vegas, Nevada. A gunman has opened fire on a music festival in Las Vegas, leaving at least 20 people dead and more than 100 injured. Police have confirmed that one suspect has been shot. The investigation is ongoing.
Photograph by David Becker—Getty
By Lisa Marie Segarra

With 59 people killed, Sunday night’s mass shooting in Las Vegas marked the deadliest in modern U.S. history — and the death count is more likely to rise.

Shooter Stephen Paddock’s rampage at the Route 91 Harvest Festival outside the Mandalay Bay Resort and Casino was not the deadliest shooting in U.S. history. That unfortunate title goes to the 1890 Wounded Knee Massacre left more 200 Native Americans dead. But it’s the deadliest of the modern era.

The shooting at a Las Vegas concert became the deadliest mass shooting in modern U.S. history after at least 59 people were killed. More than 500 people were also injured.

Omar Mateen opened fire on the Pulse nightclub in Orlando on June 12, 2016. He killed 49 people before taking hostages and was shot and killed during a gun fight with police. Mateen was a U.S. citizen, and while ISIS claimed the attack, he did not seem to have communication with the terror group.

Florida Gov. called the shooting “an act of terror.”

The shooting at Virginia Tech claimed 32 lives, not including the shooter. Seung-Hui Cho killed two students in a dorm before rearming and killing others in classrooms on another part of campus. Cho also left a disturbing note in his dorm room, ABC reported. He later shot and killed himself.

Adam Lanza killed his mother before proceeding the Sandy Hook Elementary School where she worked in Newtown, Conn. on Dec. 14, 2012. Lanza killed 20 first-graders and six adults at the school. He also killed himself before being captured by police.

On Oct. 16,1991, 35-year-old George Jo Hennard slammed his truck into Luby’s Cafeteria, in Killeen, Texas, got out, said, “This is for the women of Bell County,” and then started firing his gun. He ended up killing 23 people. Another 20 people were injured, KDH News reported. He ended up killing himself after the rampage.

The 1984 San Diego shooting left 21 people dead, including children and nineteen others injured, not including the shooter himself. James Oliver Huberty entered the McDonald’s in the San Ysidro neighborhood of San Diego and opened fired. He was shot and killed by a police sniper.

U.S. Marine sniper Charles Joseph Whitman went up to the tower at the University of Texas on Aug. 1, 1966 and began firing at students. He killed 14 people and injured at least 30. He also killed his wife and mother earlier in the day. In a note he said he didn’t want his wife to “face the embarrassment that my actions will surely cause her” and put his mother “out of her pain and misery.” Whitman was stopped when he was killed by police.

Syed Farook and Tashfeen Malik killed 14 and injured 21 before they were killed in a gun fight with police in December 2015. The married couple started shooting in the Inland Regional Center at a holiday party for employees. The motive behind the act of terror was debated for more than a year after the incident and led to legal battle over whether Farook’s iPhone should be unlocked.

Jiverly Wong killed 13 people at an immigration services center in Binghamton, N.Y. in 2009. Four other were critically injured, according to the New York Times. Wong, who was a Vitenamese immigrant and lived in a nearby town, killed himself before police found him.

Correction: The original version of this story misstated the name of the gunman in the Las Vegas shooting. He is Stephen Paddock, not Stephen Backer. 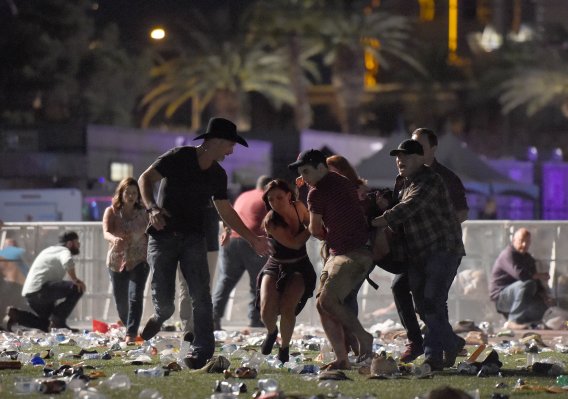 The Las Vegas Shooter Modified His Guns. Here's Why That's Important
Next Up: Editor's Pick