Consumed by Americans each night after a long work day, late-night television shows are often a source of levity and comedy.

But after instances of tragedy, late-night comedians often take a more serious tone to use their platforms to make statements or calls to action in a move that has become all too familiar.

Such was the case on Monday night, as late-night hosts responded to the deadliest mass shooting in modern U.S. history with calls to action to end gun violence in the U.S.

On Sunday night, a gunman identified as 64-year-old Stephen Paddock opened fire on tens of thousands of people at a Las Vegas country music festival perched from the window of his hotel room. At least 59 people died and 527 others were injured as concertgoers tried to escape the area while law enforcement and ambulances rushed to the scene.

Politicians, celebrities and people around the world shared their condolences for victims, their families and all those impacted by the massacre — and some cited the tragedy as reason for gun control in the U.S.

And many late-night comedians did the same. Here’s what late-night hosts said about the attack in Las Vegas.

Jimmy Kimmel immediately began his monologue in tears as he lamented the tragedy in Las Vegas, his hometown.

“We wonder why — even though there is probably no way to ever know why — a human being would do something like this to other human beings who are at a concert, having fun and listening to music,” Kimmel said, choking up.

“It’s interesting because when someone with a beard attacks us we tap phones, we invoke travel bans, we build walls, we take every possible precaution to make sure it doesn’t happen again,” Kimmel said. “But when an American buys a gun and kills other Americans, then there’s nothing we can do about it.”

Kimmel, who, like other late-night hosts, noted the frequency of these attacks in the U.S., showed images of each senator who voted against a bill that would have closed loopholes in the law that allow people to buy guns under certain circumstances without going through a background check. The bill was considered last year after the mass shooting in Orlando.

“Maybe I’m nuts, but I would like to think we could put politics aside and agree that no American citizen needs an M16. Or 10 of them,” Kimmel said. “And maybe that way we don’t do this again.”

Stephen Colbert, perhaps the most cited late-night critic of President Donald Trump and his administration, made a plea directly to the president to enact gun control legislation.

“You want to make America great again? Do something that the last two presidents haven’t been able to do: pass any kind of common sense of gun control legislation, that the vast majority of Americans want,” Colbert said.

Colbert noted how last week, House Majority Whip Steve Scalise returned to Congress after a near-fatal shooting during a Congressional baseball practice over the summer. His return after his long recovery, Colbert said, “was a kind of moment that gives you hope that Congress might work together for the common good.”

“The bar is so low right now, that Congress can be heroes by doing literally anything,” Colbert added.

Seth Meyers opened Late Night by lauding first responders, blood donors and law enforcement, among many others, for their efforts of aiding the victims of the attack.

“It always seems like the worst displays of humanity in this country are immediately followed by the best, and then, sadly, that is followed by no action at all. And then it repeats itself,” Meyers said.

He went on to say that, no matter how tragic the mass shooting, some politicians shy away from discussing gun control as a possible solution to prevent these recurring tragedies in the U.S.

“To Congress, I would just like to say: Are there no steps we can take as a nation to prevent gun violence?” Meyers asked. “Or is this just how it is and how it will continue to be?”

“If it’s going to be thoughts and prayers from here on out, the least you can do is be honest about that,” he said.

Conan O’Brien said one of his producers stood outside his office Monday with a file full of the remarks he made after the Sandy Hook shooting in 2012 and Orlando nightclub shooting in 2016. The need to make these statements, said Conan, who has been hosting late-night shows since 1993, has grown immensely over the last decade.

“For me or any TV comedy host back then to come out and need to address a mass shooting spree was practically unheard of,” Conan said. “But over the last decade, things have changed.”

“How could there be a file of mass shooting remarks for a late-night host?” he asked. “When did that become normal? When did this become a ritual, and what does it say about us that it has?”

Saying he’s not one to get political, Conan echoed his statements from the summer of 2016, when more than 40 people were killed at Pulse nightclub in Orlando.

“I don’t think it should be so easy for one demented person to kill so many people so quickly,” Conan said. “The sounds of those automatic weapons last night are grotesquely out of place in a civilized society.”

“Something needs to change. It really does.”

The Daily Show‘s Trevor Noah spoke of his experience living in the U.S., where, he said, 20 mass shootings have occurred since he moved here from South Africa. Noah pointed to how some political figures, including in this case White House spokeswoman Sarah Huckabee Sanders, say in the immediate aftermath of a mass shooting that it is not yet the time to discuss gun control.

“To the people of Las Vegas, I can’t give you thoughts and prayers,” Noah said. “I can only say that I’m sorry. I’m sorry that we live in a world where people will put a gun before your lives.”

James Corden opened The Late Late Show by mourning the victims of the Vegas attack and lauding the first responders and blood donors who immediately took action to help others.

“Last night was the biggest mass shooting in the United States history,” Corden said. “That’s a record that’s been set twice in just the two and a half years that I’ve been living in America.”

Corden, who lived in the United Kingdom before the U.S., said he comes from a place where far fewer mass shootings occur. And in America, he said, that should not become normalized.

“Gun violence should not be a staple of American life,” Corden said. “Some say it’s too early to talk about gun control. For those victims last night, it’s far too late.” 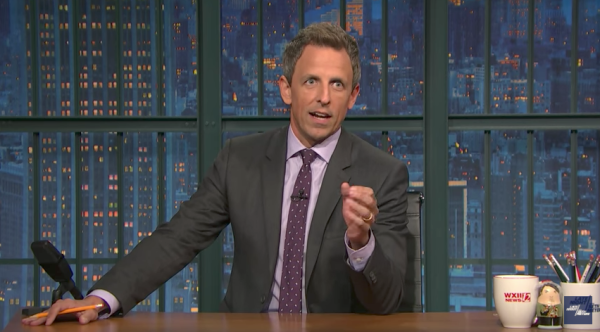 Seth Meyers Gets Heartfelt with Plea to Support NFL Athletes
Next Up: Editor's Pick