My Name Is Mary Dixie and That's a Complicated Fact

Ideas
By Mary Dixie Carter
Carter, a former publishing director of the New York Observer, is a writer based in Brooklyn.

My mother was a Carter who married a Carter. They weren’t related, though the clerk didn’t believe me when I was filling out my marriage license, nor did she believe I understood the definition of “maiden name.” I know my parents weren’t cousins because my great uncle on my father’s side changed his Hungarian surname from Kardos, which means swordsman, to Carter and the rest of the New York family followed his example. If we look to names for information, and many people do, “Mary Dixie Kardos” would tell you more than “Mary Dixie Carter,” or at least it would add dimension. But “Mary Dixie Carter” appears on my birth certificate, my driver’s license, my social security card — it’s my name.

My Southern mother, Dixie, named me after herself, and my parents frowned on anyone who dropped the “Dixie” from the double name “Mary Dixie.” For years, I felt my name misrepresented me, partly because I shared the name with my mother. Also because I’m not exactly Southern. As a child, I spent summers in Tennessee with my grandparents. Though proud of my Tennessee background, I never lived in the South. I’m half Jewish and grew up in New York and Los Angeles. Mary Dixie Carter, a double name with “Dixie” in it, won’t stand for anything but a Southern reading.

Of course, almost everyone is familiar with that connotation: “Dixie” as reference to the South, and more specifically, to the states that made up the Confederate States of America. The origin, according to Collins English Dictionary, is possibly from the nickname of New Orleans, where ten dollar notes were labeled “dix,” French for ten, and came to be called “Dixies.”

White supremacists recently gathered again in Charlottesville, Virginia — the fourth time this year. In this somewhat smaller rally, led by Richard Spencer, participants carried torches in imitation of the Nazis and the Ku Klux Klan, as they did previously, and Spencer’s message remained consistent: “We [meaning the white race] defined this country.” “This country ultimately belongs to us.” This time, demonstrators sang “I wish I was in Dixie,” a nineteenth century minstrel song attributed to Dan Emmett, which is largely responsible for cementing the connection between the word “Dixie” and the Antebellum South. It was reportedly a favorite of Abraham Lincoln. Louis Armstrong, Bob Dylan and Elvis Presley all made recordings of “Dixie.” But some verses paint slavery in a positive light, harkening back to cotton fields, and many people consider the song seriously offensive. Modern white supremacists have appropriated this song laden with Southern nostalgia for their own agenda; Spencer and his cohorts were probably hoping to tap into emotion.

For these reasons, at times I feel compelled to undo the impression my name may have given someone, worst case being that I have a personal connection to the Confederacy. As absurd as that seems to me, it’s in the realm of possibility. Some people will hear dark undertones in my name and have a negative reaction to me because of it, especially today when racial tensions are high. It is an obstacle to overcome.

On occasion, people have made subtly anti-Semitic comments in front of me. They might mention that so-and-so is Jewish, but in a certain context and in a certain tone of voice. The speaker assumes I’m not Jewish, often because of my name and reinforced by my blonde hair. Simultaneously disparaging and pigeonholing, these remarks hit me as a multi-layered insult.

According to Collins English Dictionary, “Dixie” means “a large metal pot for cooking, brewing tea etc.” Alternatively, it is defined as “a lookout.” Interestingly, websites like House of Names state that the Dixie family surname dates back to the Anglo-Saxon tribes of Britain in the 13th Century.

At this point in my life, I wouldn’t know how to separate myself from my name, nor would I want to, nor do I wish in any unequivocal way that I’d done it earlier. It took a long time for me to realize that my family is me, with all of its sundry factions. Young adults think they can move somewhere for a clean slate. There’s no such thing as a clean slate. Even a newborn baby enters into his parents’ context.

When I was a teenager, my mother and I stopped at a coffee shop on our way to a movie. We were about to sit down at a table when I realized the prior patron had spilled his coffee on my chair and the floor. My mother asked me to get some napkins. I wanted to move to a different table.

“Darling,” she said, “we always have to clean up other people’s messes.”

These days, my teeth chatter and I sweat through my t-shirt when I’m watching the news: scenes like the rallies in Charlottesville and the accompanying spectacle of Nazi flags, Confederate flags, and all manner of hate-filled symbols. A line from The Cat in the Hat by Dr. Seuss replays in my head: “This mess is so big and so deep and so tall, We cannot pick it up, there is no way at all.”

Carter’s work has appeared in The Economist, the San Francisco Chronicle, the Chicago Tribune, The Philadelphia Inquirer, The New York Observer and other publications. 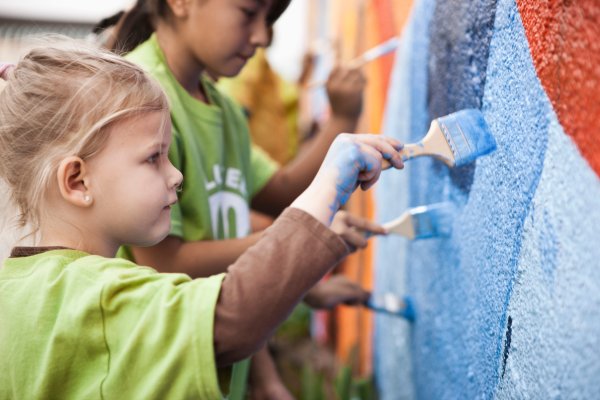 Foundations Should Work More Like Venture Capital Firms
Next Up: Editor's Pick