The Route 91 Harvest Festival in Las Vegas Ended in a Mass Shooting. Here's What to Know About It

In what appears to be the deadliest mass shooting in modern U.S. history, a gunman opened fire Sunday night on a crowd at the Route 91 Harvest Festival at the Mandalay Bay in Las Vegas, killing at least 50 people and wounding hundreds more.

SWAT teams quickly descended after receiving reports of gunfire near the Route 91 Harvest Festival. Officials confirmed later that the shooter — identified by police as 64-year-old Stephen C. Paddock and now dead after an encounter with law enforcement — shot at the concertgoers from high above on the 32nd floor of the gold glass Mandalay Bay Resort and Casino.

Here’s what you need to know about where this happened.

What is the Route 91 Harvest Festival?

The open-air festival, nicknamed “the neon sleepover” is three days of some of the big names in country music spread across a 15-acre concrete lot underneath the glittery Las Vegas skyline. It’s been held there for for the past four years.

Who was performing at the festival?

Jake Owen, who has toured with Aldean, Brad Paisley and Kenny Chesney, was also onstage when the shooting began. He took to Twitter to express his sorrow for those did not survive the shooting at the Route 91 Harvest Festival at the Mandalay Bay in Las Vegas.

Counted among the lineup of 35 acts are Eric Church, Sam Hunt, Ashley McBryde, Maren Morris, Big & Rich and Midland all performed during the weekend.

How many people showed up at the festival?

Police say the gunman shot down at the crowd of more than 22,000 people from a room on the 32nd floor of the Mandalay Bay Resort and Casino. (The village’s capacity is 25,000.)

Doors opened at 2 p.m. every day, and the festivities shut down around midnight, according to the festival’s website. Organizers only sold three-day passes for $210, and the venue was mostly concrete. The main stage was AstroTurf. There wasn’t parking, so Uber rides were encouraged. Plenty of families piled into RVs to travel there to dance, and children younger than six got in free.

What do we know about the Mandalay Bay hotel?

With more than 3,000 rooms and 43 stories, the popular Mandalay Bay Resort and Casino hotel opened on the south end of the Las Vegas Strip in 1999. Two main draws are gambling at the tables and concerts. Janet Jackson and Arcade Fire are scheduled to perform there in October. Costs change, but as of Monday morning, you could get a room with two queen beds there for around $500 a night.

What were the safety regulations at the festival? 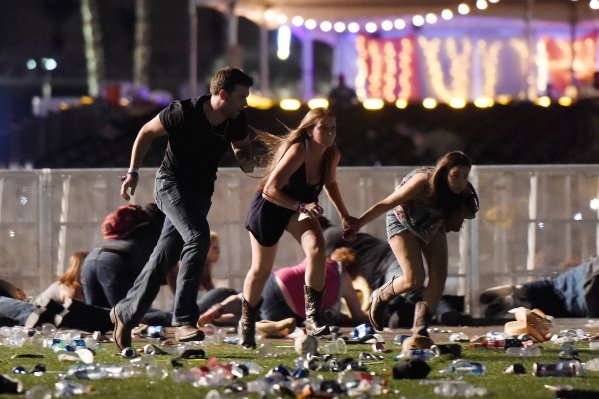 Beware of These Hoaxes Being Spread About the Las Vegas Shooting
Next Up: Editor's Pick