By Alana Abramson and Jennifer Calfas

The havoc Hurricane Maria wreaked on the island of Puerto Rico, a U.S. territory, has put an obscure statute in the national spotlight: the Jones Act.

The White House announced Thursday that President Donald Trump was waiving the Jones Act, also known as the Merchant Marine Act of 1920, just two days after he declined to do so.

“This waiver will ensure that over the next ten days, all options are available to move and distribute goods to the people of Puerto Rico,” acting Secretary of Homeland Security Elaine Duke said in a statement Thursday. “It is intended to ensure we have enough fuel and commodities to support lifesaving efforts, respond to the storm, and restore critical services and critical infrastructure operations in the wake of these devastating storms.”

Puerto Rico was devastated by Hurricane Maria, which hit the island on Sept. 20 and caused widespread power outages that won’t be fully restored for months, massive flooding and left less than half of the island’s residents without drinkable water. Aid and relief efforts, which have been transported by boat and aircrafts, have been slow-moving compared to those the helped Florida and Texas immediately following destructive hurricanes earlier this year.

Trump waived the Jones Act at the request of Puerto Rico’s Governor Ricardo Rossello, White House Press Secretary Sarah Huckabee Sanders wrote in a tweet Thursday. The decision came after pressure from other politicians like Arizona Sen. John McCain, who sent a letter to the Department of Homeland Security on Tuesday urging the U.S. to waive the act. However, the waiver will only last 10 days, according to a release from Duke.

Rossello expressed his thanks for the waiver in a tweet Thursday morning.

What is the Jones Act?

Under the Jones Act, any ship carrying cargo and traveling between ports in the United States, or to the United States from a foreign country, has to be built in America and owned by an American. The Jones Act consequently increases the costs for foreign ships, or ships that don’t fit these requirements, to make deliveries at ports like Puerto Rico. The Jones Act does not apply for the U.S. Virgin Islands.

By waiving the statute, Trump has effectively loosened the regulations, making it easier for ships carrying aid like food, water, medicine and other items after Hurricane Marie to dock in Puerto Rico.

When was the Jones Act passed?

The Jones Act was passed in 1920 following World War I, after German U-boats sunk thousands of ships and continued to pose a threat to the U.S. Decades later, these submarines are no longer a threat, and the Jones Act has received substantial criticism from politicians in the continental U.S. and Puerto Rico as a hindrance of economic development for the island due to its high costs, as several studies have pointed out.

But supporters of the law have argued the Jones Act has not prevented more ships from providing aid during natural disasters, according to the Washington Post.

When was the Jones Act last lifted?

The act was waived twice earlier this month following Hurricanes Irma and Harvey, on Sep. 8 and 11, which lasted 7 days each. In those cases, ships were used to move gas north and to the East Coast as refineries in the south were shut down as a result of the storms.

The suspension of the law for 10 days is far lower than the one-year waiver requested by New York Rep. Nydia M. Velázquez, who was born in Puerto Rico, and several other lawmakers to Acting Homeland Security Secretary Elaine Duke on Monday. The waiver will likely help Puerto Rico in the immediate after math, but perhaps not as much in longterm recovery.

Salim Furth, a research fellow at the Heritage Foundation told The Atlantic the U.S. should waive the Jones Act for as long as Puerto Rico needs federal aid as it recovers. “We need a long-term waiver,” he said. “If they’re using mainland taxpayer money, they should be able to use American goods.”

— With reporting by Sarah Begley, Jennifer Calfas and Karl Vick 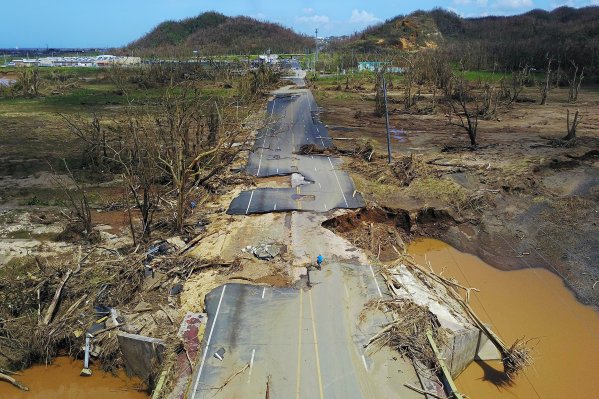 How the U.S. Turned Its Back on Puerto Rico
Next Up: Editor's Pick