Jennifer Lawrence Had the Funniest Response to Her Extremely Mean Tweet

Welcome back to “Celebrities Read Mean Tweets,” the always-viral segment from Jimmy Kimmel in which all our favorite A-listers come face to face with the most disparaging comments made about them online.

From Wonder Woman‘s Gal Gadot defending her body against haters to Silicon Valley‘s Kumail Nanjiani coming back with the ultimate “your mom” response, Kimmel has once again assembled an all-star lineup of celebrities willing to acknowledge their naysayers — usually with a comeback in store. (See: Jennifer Lawrence dryly accepting the raunchy insult levied in her direction with signature good humor.)

“Emma Watson seems like the type of girl who I would be friends with for like 3 days and then get really sick of but not tell her,” Watson reads out, looking injured.

“Jake Gyllenhaal has the most punchable face of all time. I’d like nothing more than to sock him in his ugly, soft, starry-eyed pug face,” Gyllenhaal recites, indeed appearing starry-eyed as ever.

“Elisabeth Moss looks STUNNING,” the Handmaid’s Tale star reads, seeming pleased — at first. But the tweet takes a turn for the worst: “I think she can clean up well, despite my grandmother’s harsh opinion that she’s hideous.”

Alec Baldwin even gives some air time to President Donald Trump’s notoriously poor opinion of his work. For more from Nikolaj Coster-Waldau, Dave Chappelle, Jennifer Aniston and more, watch above. 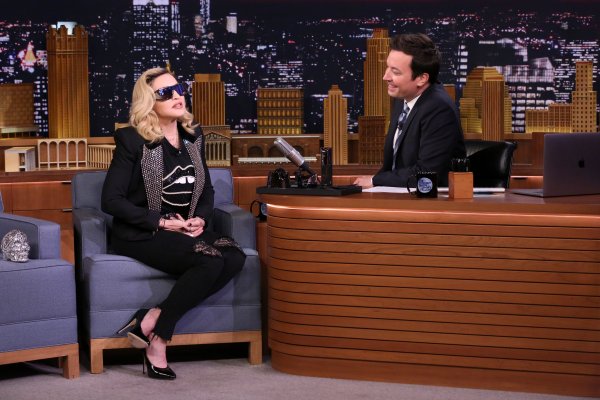 Madonna Might Surprise You With Her Simple But Effective Kim Kardashian Impression
Next Up: Editor's Pick