North Korean leader Kim Jong Un and President Donald Trump have been hurtling insults left, right and center at each other this past week.

The U.S. President kicked off this recent round of insult exchanges when he referred to Kim as a “Rocket Man” on a “suicide mission,” during his speech at the U.N. General Assembly on Tuesday. A few days later, Kim released a unprecedented statement in response, in which he called Trump a “dotard” — a person in a state of “senile decay marked by decline of mental poise and alertness” — and “mentally deranged.”

Trump threw the next punch; he took to Twitter to call the North Korean leader “obviously a madman who doesn’t mind starving or killing his people.”

But this isn’t the first time we’ve seen the two world leaders exchanging a variety of creative insults. On July 4 of this year, Trump took to Twitter to insult Kim, in response to North Korea’s claim that it had successfully tested an intercontinental ballistic missile (ICBM) for the first time.

“Does this guy have anything better to do with his life?” Trump tweeted, adding: “Hard to believe that South Korea and Japan will put up with this much longer. Perhaps China will put a heavy move on North Korea and end this nonsense once and for all!”

In August, North Korea’s official Korean Central News Agency described Trump as a leader who frequently tweets “weird articles of his ego-driven thoughts” and “spouts rubbish” to give his assistants a hard time, the Associated Press reported at the time. The KCNA also criticized South Korea’s Defense Minister Song Young-moo for “pinning hope on that mad guy,” referring to Trump.

And earlier in September, Trump described North Korea as “a rogue nation” and “embarrassment to China.” 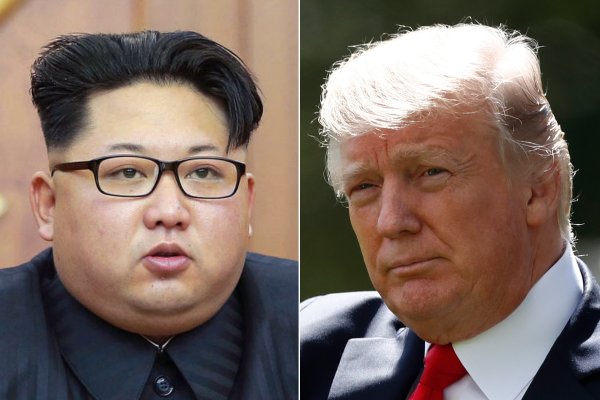