Leonardo DiCaprio Explains What Happened When He Met Donald Trump

This week, Leonardo DiCaprio is flexing his voice on climate change. He took a break from the mean streets of New York City to stop by the Yale Climate Conference at the Ivy League university’s New Haven campus, appearing onstage on Tuesday for a discussion with former Secretary of State and event host John Kerry. The Revenant actor and Before the Flood producer drew a substantial crowd of 2,500. He made pointed statements about the current administration’s stance on climate change, and recalled his attempt to sway Donald Trump when he visited Trump, who was then President-elect, at Trump Tower back in December.

“We presented him with a comprehensive plan to tackle climate change, while also simultaneously harnessing the economic potential of green jobs,” DiCaprio recalled, in remarks reported by the Hartford Courant. “We talked about how the United States has the potential to lead the world in clean-energy manufacturing and research and development.”

But DiCaprio’s efforts proved in vain: Trump subsequently said the U.S. would pull out of the Paris Agreement and appointed Scott Pruitt to lead the Environmental Protection Agency.

“We should not have people in office who do not believe in facts and truths and modern science that are able to manipulate and risk the entire future of this entire generation,” DiCaprio said. “We are at that turning point right now, and we are going to look back at this point in history, and frankly this administration, and certain people are going to be vilified for not taking action. They really are. And it’s up to this generation, it’s up to all of you to get involved and make a difference.”

The star also announced he plans to donate a $20 million grant from his foundation to environmental causes. “We are proud to support the work of over 100 organizations at home and abroad,” the actor said. 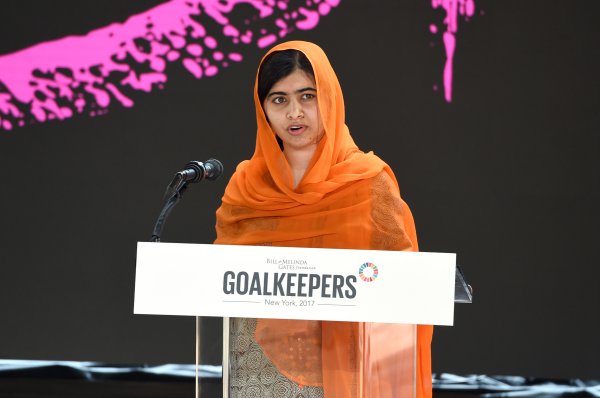 Malala Yousafzai & Priyanka Chopra Shared a Moment Together
Next Up: Editor's Pick