I have a date tonight. A first date.

I’m meeting a guy I matched up with on a few dating apps about a year ago. But when we initially connected, I was seeing someone else, so we never got beyond the first few messages. A year later, we’re both still out there swiping.

Based on the tangential amount of information I’ve gained in our week of texting and the few commonalities we have with one another at the moment, he’s excited to meet me. It’s adorable. He seems to think this is all kismet. I’m looking forward to meeting him too, but I’m reluctant to allow myself to feel as excited. I see the similarities that we share and our potential, but I’m all walled up.

And I realize this is a problem.

I’ve collected a lot of bricks for this wall. In the last few years, I’ve dusted myself off after a divorce and a devastating breakup (or three.) I’ve re-established my career in education and began to pursue a new passion in publishing. I’ve downloaded dating apps, swiped on countless men and gone on a number of first dates.

In short, I’ve tried. I’ve put myself out there in the dating pool. I jumped into the deep end — and almost drowned. Now, I suppose I’m treading water in the five-foot area. But I don’t want to be careful. I want to leap off the high dive.

When we’re younger, we’re encouraged to take a paint-by-numbers approach to life: go to school, find a person, get married and have kids. It seems so easy and uncomplicated.

I did that. I got married shortly after graduate school to a man who I thought I’d be with forever. But then we got divorced. I know it was the right decision, but I didn’t think it would be this hard or take this long to find someone who’s right for me. I definitely didn’t consider the possibility that I may never find the type of love where you tell your mother and girlfriends, all starry-eyed: “I’ve never been so sure of anything in my life.”

And just when I was beginning to think that maybe I was too broken and cynical to allow stars to get anywhere near my eyes, I met someone who I completely fell for. After everything I had been through, it felt good. It meant that I was capable of having those types of feelings for another person. I could still let myself be vulnerable. I was going to be OK.

I dedicated my debut novel to that person. I was a little apprehensive about it, sure, but the dedications and acknowledgements pages were due pretty early on in that relationship, so I had to take a leap if I was going to do that. And I decided to be optimistic.

“You’re still going to be around when the book comes out, right?” I asked, in kind of a sarcastic, jokey, just-kidding-of-course-you’re-going-to-be-there way. But underneath the glib question were the entire contents of my insides. Here are my guts. Here’s everything I am. Do you want it? Do you want me?

He chuckled and squeezed my hand. “Of course.”

Four months later, I was asking my agent if we were too far along in the process to change the dedication. We weren’t. Thank God. Turns out, I couldn’t chop a tomato the way I was supposed to. My job wasn’t as important as his. My worries and goals? Trifles. And, damn, if I wouldn’t just shut my mouth and learn how to do things right. I felt foolish for believing that I had finally found it. And there’s a certain red-faced-ness about it I can’t seem to shake. Things like that take something from you. They scare the sh— out of me. Because I never want to be that foolish again.

I subsequently revisited an old flame, who apparently had a new interest in me. I rolled up my sleeves and showed him my scars, some of which he was responsible for. He spent an awful lot of time showing me he was ready and that he wasn’t scared anymore. He had changed and he was happy to have the chance to prove he could be trusted. And then I caught him in a lie.

So, I decided to try my luck at dating apps. Anyone who’s been in the game for a while post-breakup knows firsthand how excruciatingly difficult and exhausting it is to sift through endless profiles. It’s so rare to meet people organically these days. Now, we order them up on our phones.

I recently went on a date at this cool little speakeasy with someone after talking and texting a week prior to the date. He was attractive and seemed intelligent. He was a yakker. That’s the role I usually play, so I decided to take the opportunity to listen. He talked about baseball, his cold and unfeeling corporate job. He disclosed some pretty raw things about his past. He found ways (albeit awkwardly, as per usual with online dates) to graze my face or hand. At the end of the night, he hugged me, lingered by the car, but never leaned in for the kiss. He said he had an “awesome time” and we should hang out again. I politely agreed and then went home alone. I wasn’t disappointed, but I also wasn’t thrilled with how the night ended.

I didn’t hear from him the next day, which was unusual given how frequently we had communicated the week prior to the date. I got the hint. So, rather than continue to play the game of “who texts first,” I messaged him and said that I got the sense he wasn’t interested. I thanked him for a nice night and wished him well. Easy.

Except I spent the rest of the day worried that I was too blasé about the encounter because I was broken from my previous relationships. Was I giving up too easily? Or was there just not a spark with this particular guy? In an attempt to stop stressing myself out, I decided it was the latter.

So, here I am waiting for a picture I swiped right on to materialize. He isn’t late. I’m just early. I roll the glass of wine between my fingers and check my phone for about the 50th time. “This poor new guy,” I think as I watch 20-somethings across the bar take selfies.

I hate meeting this way. It makes people and potential partners so disposable. If he doesn’t work out, you can pull out your phone and find someone new. It makes it easier to give up someone new and hide behind that wall (or screen.) Of course you’re not going to fall in love with every guy who you deem attractive based on five photos and a few sentences. But why does this process have to be so unromantic and unsexy?

At 35, I’ve been pretty bruised by my past relationships. But some part of me still craves that love-at-first sight type of romance. She’s the part of me that sent a “YOU ARE MY SOULMATE” letter to the cute guy in choir class in 10th grade. She’s the one who purchases pretty lingerie and lets fireflies loose in her chest. She’s the one who ordered this glass of Riesling to calm the anxiety about meeting this new guy tonight.

Maybe she’s naive. Maybe she’s not. But there’s one thing I know she is — and that’s goddamn invincible.

I feel a slight touch at the small of my back. Here he is. He has impossibly blue eyes and deep dimples — just like in his photos. He smiles. I smile.

And here we go again.

Ricki Schultz is the author of Mr. Right-Swipe. 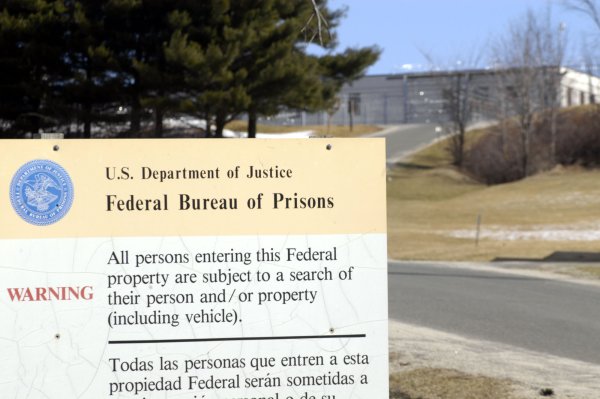 2 Years In Prison Inspired Me to Fight for Justice Reform
Next Up: Editor's Pick