Is the U.S. Overdue for a Catastrophic Earthquake? These Cities Are Most at Risk

The likelihood that the U.S. will see a catastrophic earthquake within the next 30 years is very high — and it’s not just the West Coast that’s at risk, experts say.

Seismologists have long warned that the U.S. is “overdue” for an earthquake, because a catastrophic one has not occurred in the U.S. since about 1989, when the Loma Prieta earthquake killed at least 63 people in California, said Robert Yeats, a geology professor at Oregon State University. The most destructive earthquake the U.S. has ever seen was the 7.9-magnitude “Great San Francisco Earthquake of 1906,” which killed an estimated 3,000 people, according to the agency. As more years have passed without earthquakes, pressure has built up along certain fault lines as tectonic plates try to shift, including in the Pacific Northwest and California, Yeats said.

Earthquakes, which occur when two Earth surfaces move against each other, are typically difficult to predict and impossible to prevent. But the U.S. Geological Survey (USGS) maps out high-risk zones based on seismic and geologic data that take into account when and where earthquakes occurred in the past, among other measures that help them predict future events, according to Morgan Moschetti, a USGS research geophysicist. See which areas have the highest potential for an earthquake below.

California is famous for being an earthquake hot zone. As shown on the map above, most of the state and its neighbors to the north carry the highest risk for earthquakes. California, a highly seismically active area, has more than 300 fault lines crossing the state. Particularly at risk is the southern part of the San Andreas fault, which runs close to Los Angeles and has remained quiet since a magnitude 7.9 earthquake in 1857, meaning a lot of pressure has built up along that part of the fault line, Yeats said. According to Moschetti, Southern California, Los Angeles and the San Francisco Bay Area are most at risk in the coming years.

The Pacific Northwest, located along the Cascadia subduction zone, a fault that runs from Vancouver Island to northern California, is bracing itself for an earthquake as pressure has built up in the zone since the 1700s, Yeats said. He said the eventual earthquake could measure at a magnitude of 9, and could be potentially comparable to the San Sixto earthquake, which hit Mexico in 1787 with an estimated magnitude of 8.6.

“The thickness and size of the plates means that when it finally goes, it is going to cause a very big earthquake,” he said. Yeats said it is impossible to know when the earthquake will occur, but has measured the buildup of strain on the Earth’s crust near the subduction zone.

“Unfortunately, we just don’t know how to tell when exactly it is. We are certainly envious of people who could predict the eclipse,” he said, referring to the solar eclipse that crossed the sky earlier this year.

Once the earthquake hits, cities like Seattle and Portland will bear the brunt of the earthquake in body counts because they are more densely populated than the surrounding regions, Moschetti said.

Away from the coasts and toward the Midwest and southern parts of the U.S. lies the New Madrid Seismic Zone, which puts states including Missouri, Illinois, Kentucky, Tennessee, Indiana and Arkansas at risk for a destructive earthquake. St. Louis and Memphis have already seen damaging earthquakes in the 1800s, Moschetti says. The New Madrid fault system can also affect Mississippi and Oklahoma — which, in particular, has seen a rising risk for earthquakes that are induced by human activity, such as drilling for oil and natural gas. Last year, more than 70 earthquakes hit Oklahoma in one week, prompting concerns from state officials about the use of injection wells, which are depositories for drilling byproducts and wastewater. The injected water can alter the friction of natural fault line and cause earthquakes.

Alaska, which has an average of 1,000 earthquakes per month, is one of the most seismically active regions in the world, according to the state’s government website: “The active geology of Alaska guarantees that major damaging earthquakes will continue to occur.” The state had the second-largest earthquake ever recorded in 1964 and has 11% of the world’s recorded earthquakes. According to the state government, seven of the 10 largest earthquakes in the U.S. were in Alaska, and one earthquake with a magnitude of 8 or larger has occurred every 13 years since 1900.

The USGS says Hawaii experiences thousands of earthquakes each year due to the eruptive forces within its active volcanoes, as well as the weight of the islands causing structural changes beneath the Earth’s crust. While most of the earthquakes are small — in fact, a 3.7-magnitude quake struck near Kaneohe Station, Hawaii, on Wednesday — some are large enough to cause damage, the agency says. 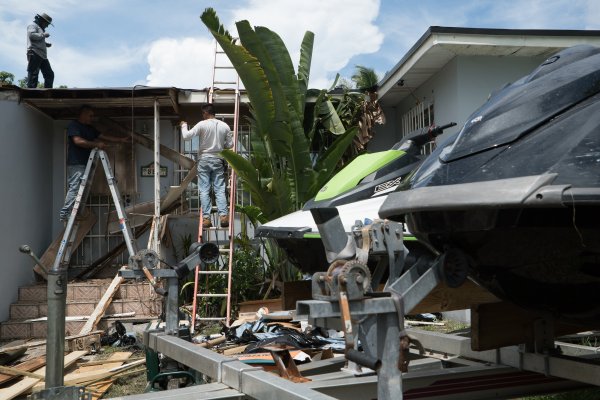