'I Am Sure She Is Under There, Alive.' On the Ground in Mexico City in the Hours After the Quake

At 11 a.m. yesterday, residents in offices, schools and housing estates across Mexico City took part in an earthquake drill timed to commemorate the catastrophic tremor on the same date in 1985. Just over two hours later, a real, 7.1 magnitude quake shook the capital and surrounding states, making skyscrapers sway like they were made of paper, shattering windows and roofs, and toppling entire apartment blocks.

When the quake struck, I was on the twentieth floor of an office building, which moved up and down like a fairground ride as books and folders crashed onto the floor. I wanted to immediately run for my life, but had to wait until we we were told to evacuate, and walk down the twenty flights of stairs in the pitch black, touching the wall for support.

As millions like me poured onto the streets, battling to make their way to their homes and loved ones, it became apparent it had been the most devastating tremor in Mexico since that Sept. 19, 1985 disaster. Within hours, the government declared that more than 220 people had been confirmed dead while many more were buried under the rubble of smashed buildings that had were scattered across the city.

A school had collapsed, killing at least 20 children with dozens more missing. A six-storey building, home to an accounting company, language school and Internet firm, lay flattened in a cloud of dust. Through glitzy business areas, middle class suburbs and hardscrabble slums, the trail of destruction continued.

The injured were rushed to hospital, a man running through the street with his young daughter in his arms, another clutching his bloody head as he boarded an ambulance. The sound of crying rang out, as people searched frantically for family members, some discovering the worst.

Maria Puente, 55, fought through a thick crowd outside a collapsed office building desperate to try and find what had happened to her daughter, a secretary who worked there. “I am sure she is under there, alive. They need to get her out. She’ll be hungry, thirsty. They will need to get her to hospital.” Ismael Herrera, a 19 year old student, paced near the same building looking for his mother who had been walking her dog. “I can’t find her. She is not answering her telephone.”

Widespread electricity and cellphone blackouts made the searches all the more difficult as night fell. Thousands of soldiers and marines piled into the worst afflicted areas to support the rescue operations and keep order in blacked-out streets.

President Enrique Pena Nieto went to the collapsed school to support efforts and talk to frantic parents and neighbors. He was likely trying to avoid the mistakes of the former President Miguel de la Madrid who led Mexico back in 1985 when the earthquake struck. De la Madrid was widely criticized for a poor handling of that disaster, which killed more than 5,000 people.

The final death toll from the current tremor likely won’t be known for several weeks; in the catastrophic 2010 earthquake in Haiti, a boy survived for 27 days under the rubble.

Throughout the night, thousands of volunteers went out onto Mexico City streets to join rescue crews clearing rubble as fast as they could. Long lines worked though until the next day, passing buckets of debris, running in with wheelbarrows. Others carried water or handed out blankets and sandwiches to families sitting, and sometimes sleeping, on sidewalks.

As dawn approached, Rafael Valenzuela, a 37-year old graphic designer, drunk a bottle of water after working 12 hours straight hauling stones. He said he had rushed home from work then gone out to join rescue efforts near his home, which he said was his duty. “I remember the earthquake of 1985. I was only five at the time but it was a big deal, and something we have always talked about,” he said. “It was like we were prepared for this. Like deep down, we knew this was going to come again.” 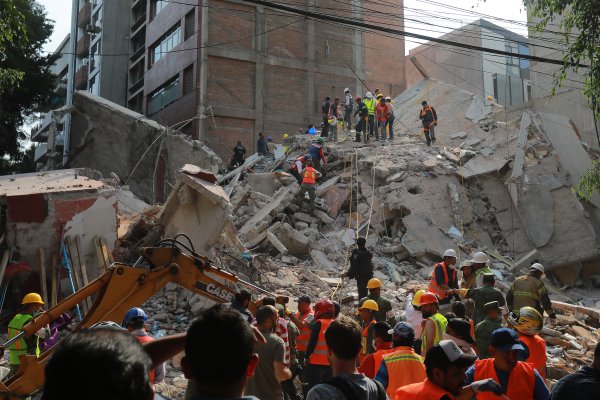