'This Is All We Can Do': How the Japanese Are Preparing for a North Korean Nuclear Attack

The wail of the emergency siren reverberates across the school’s playing field, conjuring a primal fear even before the words “Missile launched! Missile launched!” crackle over the loudspeaker. Two dozen men, women and children—many wearing bonnets and wet neck towels against the blazing sunshine—scamper across the shingle expanse before squatting down low with arms covering heads.

“We haven’t got a nuclear shelter or even strong buildings, so this is all we can do,” says Nakamura Takashi, an official of Sakura City in Japan’s central Tochigi Prefecture, who helped to organize the missile defense drill at the local Kamimatsuyama Elementary School on Sept. 10. “The government says you have a much higher survival rate if you crouch rather than stand up.”

Pyongyang’s relentless pursuit of a nuclear arsenal capable of striking the continental U.S. has caused outrage in Washington, provoking U.S. President Donald Trump to threaten to “totally destroy” North Korea in response. But it is Japan that lies on the nuclear front line.

North Korea loathes Japan because of its colonization of the Korean peninsula prior to World War II. While North Korean leader Kim Jong Un has more than 1,000 pieces of conventional artillery pointing at South Korea, the 22 ballistic missiles his regime has tested since February have all been fired toward Japan, whose capital Tokyo lies just 800 miles from Pyongyang.

“The four islands of the [Japanese] archipelago should be sunken into the sea by the nuclear bomb of Juche,” Pyongyang said in a Sept. 14 statement. (Juche is the ideology of socialist self-reliance pioneered by Kim Il-sung, the country’s founder and grandfather of the current Kim.) Japan, Pyongyang said, no longer needs “to exist near us.”

The last missile to fly at Japan was on Sept. 15, following an earlier one on Aug. 29. Both flew over the northern island of Hokkaido before splashing into the Pacific Ocean. They set off sirens across huge swaths of the country, including those at Sakura, a rice-farming community of 44,000 people a couple of hours’ drive north of Tokyo. Smartphone alerts beeped in unison and television stations suddenly cut to an ominous black screen with bold, white script warning of a possible missile attack. For the few minutes, until the all-clear signal sounded, residents wondered whether their world was about to end.

“It was scary,” says kindergarten teacher Atsuko Murakami, 44, who took part in the missile defense drill. “I just huddled together at home with my two young daughters watching the TV for updates.”

The threat has spurred the Japanese government to raise public preparedness. Schools have been instructed to conduct missile defense training alongside regular safety drills. Local authorities across the country have followed suit. Japan’s Fishery Agency even has plans to introduce, by next year, an alert system for fishing vessels that could be struck by a ditching missile.

Japanese fears have grown more acute after North Korea conducted its sixth nuclear test on Sept. 2. The 120-kiloton explosion was around eight times the ferocity of the bombs that devastated the cities of Hiroshima and Nagasaki at the end of World War II. Nuclear fallout is no hypothetical peril for Japan’s 126 million people, and certainly not in Sakura, which lies just 75 miles (120 km) from the Fukushima nuclear plant that went into meltdown following an earthquake and tsunami in 2011. Sakura was evacuated after that catastrophe and people still worry about radiation contamination in local crops.

Japan’s propensity for severe seismic activity means disaster preparedness is treated with the utmost seriousness. The threat from North Korea has heightened these existing concerns. Other than the missile drills, people in Sakura practice crawling through a smoke-filled tent, get shaken around an earthquake simulation chamber, and, in the event that stairs are destroyed, learn how to abseil, practicing on the façade of the white, three-story school building. Volunteers hand out steaming bowls of miso soup brimming with pork belly and root vegetables.

“We added missile evacuation drills because of this current North Korea situation,” says Sakura City mayor Takashi Hanatsuka. “Because when the alert happened on Aug. 29 we didn’t know what to do.”

Japan’s government is also at a loss for how to respond to North Korea’s aggression. Following World War II, the defeated Axis power adopted a pacifist constitution, and rested securely, as it is supposedly still is, within the U.S. “nuclear umbrella.” The nation’s military is known as the Japan Self-Defense Force and, though well equipped and trained, has restrictions on deployment.

Prime Minister Shinzo Abe wants to modify the pacifist constitution. He has already changed rules to allow Japanese troops to fight abroad and pushed through a draconian antiterrorism law. Although these policies face substantial opposition, Kim’s belligerence is a boon for Japanese hawks, a small number of whom are even calling for Japan to develop its own nuclear weapons.

In the meantime, guided missile destroyers from the U.S., Japan and South Korea have taken part in naval exercises focused on improving missile defense. Warships employ the U.S. Aegis missile defense system that can detect missile threats early, and Tokyo has plans to install Aegis Ashore land-based batteries also. These will compliment the U.S. THAAD anti-missile batteries already in place in South Korea, though people in Sakura remain skeptical of their utility.

“Even if they shoot down a missile then the nuclear material could scatter over us,” says the official Nakamura.

The peaceful solution Japan craves seems a long way off. Efforts to bring Kim to the negotiating table through new U.N. sanctions only seem to strengthen his resolve. The North Koreans “see nuclear weapons and weapons of mass destruction as the only way for them to protect themselves,” Russian President Vladimir Putin told journalists in Vladivostok on Sept. 7.

China has agreed to further ramp up U.N. sanctions, though the latest round passed on Sept. 11 stopped short of cutting off the half a million barrels of oil Beijing sends to North Korea each year. China fears that ending the fuel supply could spark the collapse of the regime and send a torrent of refugees across the shared 880-mile frontier. South Korea’s deployment of THAAD has also irked Chinese leaders, who see the system’s unparalleled surveillance capabilities as a security risk. Above all, China fears a unified Korean peninsula ruled by Seoul, which could theoretically put American troops and military hardware on Beijing’s doorstep.

‘We could be in the shelter in just one minute’

Given the intractable diplomatic stalemate, Japanese must take it upon themselves to protect loved ones.

Hiroko Omori, 42, serves iced tea on a white lace tablecloth. An outsized framed picture of a cartoon mermaid jars incongruously with her suburban Tokyo living room’s quaint floral wallpaper. In the opposite corner is the single mom’s newest statement piece: a box-like steel shelter the dimensions of a single bed, where Hiroko and her eight-year-old daughter can retreat in case of emergency. Inside the 1.2 million yen ($11,000) sanctuary is a wide-screen television, an air-conditioning unit, a portable toilet and supplies of vacuum-packed chicken stew and tinned muffins. The manufacturer says it can withstand 15 tons of crushing force.

“Since I got this I can breathe again and my heart doesn’t race anymore,” says Hiroko. “I posted a photo on Instagram and everyone started asking where I got it and how much it cost.”

Hiroko says that the shelter was installed before the 69th anniversary of the founding of North Korea on Sept. 9. Kim celebrated the 68th anniversary with an underground nuclear test and, given the escalating hostilities, many expected a missile or other provocation to mark the latest occasion. “We slept downstairs so if we heard the missile alert we could be in the shelter in just one minute,” she says.

In the end, Sept. 9 passed without incident. But a missile was launched over Japan less than a week later and more tests are likely. Shelter companies in California and Texas have reported an upsurge in Japanese orders in recent months.

‘A sense of danger’

Nuclear calamity is as much a part of contemporary Japanese DNA as sushi or manga comics. The Hiroshima Peace Museum is the most visited site for Japanese school children. Even pop icon Godzilla was spawned as a allegory for nuclear weapons, following the twin World War II bombings and 1954’s Lucky Dragon 5 incident, named after a Japanese tuna fishing boat whose crew of 23 developed radiation poisoning after straying close to the U.S. Castle Bravo nuclear test at Bikini Atoll.

Prophetically, in last year’s Godzilla Resurgence, the latest of the character’s 35 films, the U.S. government is portrayed as belligerently vying to nuke Tokyo to stop the marauding monster. For many in Japan today, the Trump administration’s volcanic rhetoric against North Korea is similarly reckless.

“Kim is routinely vilified in the media here but Trump doesn’t get off a lot better,” says Prof. Jeffery Kingston, director of Asian Studies at Temple University in Japan. “His erratic provocations are seen to be making a bad situation far worse.”

Japanese nerves also stem from historical baggage. Japan annexed the entire Korean peninsula in 1910 and ruled it until the end of World War II. Abuses over this period means enmity remains deep, bolstered by Tokyo’s perceived closeness to Washington. North Korea has admitted kidnapping 13 Japanese citizens in the past, though some believe the true number could be in the hundreds. In 2015, North Korea turned back its time zone by a half-hour on the 70th anniversary of Korea’s liberation from Japanese occupation in a symbolic act of divorce from its former colonial overlords.

“The wicked Japanese imperialists committed such unpardonable crimes as depriving Korea of even its standard time while mercilessly trampling down its land,” state media said.

Were hostilities to break out between the U.S. and North Korea, many Japanese fear they, and not the South Koreans, would be the first victims. Waging full-scale war with South Korea—which Pyongyang claims as its own territory, filled with forsaken kin wallowing under “American oppression”—would be a conflicted issue for North Korea, the thinking goes. The U.S. is meanwhile too distant and powerful to be the principal target. But North Korea would shed few tears for Japan, which is host to 50,000 U.S. troops and the USS Ronald Reagan, the only American nuclear aircraft carrier with a foreign home port.

Not everyone agrees with the heightened state of readiness. In Nagasaki, where up to 80,000 people died in an Allied nuclear bomb on Aug. 9, 1945, 13 civil society organizations including atomic bomb survivor groups have called for emergency drills to be canceled as “they are impractical and unnecessarily provoke a sense of danger.”

Still, Nobuko Oribe, whose Oribe Seiki firm sells nuclear shelters in Japan’s southern city of Kobe, says it is better to be prepared. Beneath her house is a nuclear bunker with 20 cm-thick concrete doors, a hand-cranked air filtration system, six orange bunk beds and weeks of supplies. She says many people now share her apocalyptic fears: her entire stock of 60 Swiss-made air purifiers sold out since April, and she has had almost 40 times the orders for shelters already this year compared to last—enough to safely house 800 people.

“We’ve had worries about North Korea for many years, but we’ve never had so many requests from clients as now,” she says. “Since the new American president came in, people are worried.”

—With video by Helen Regan/Tokyo 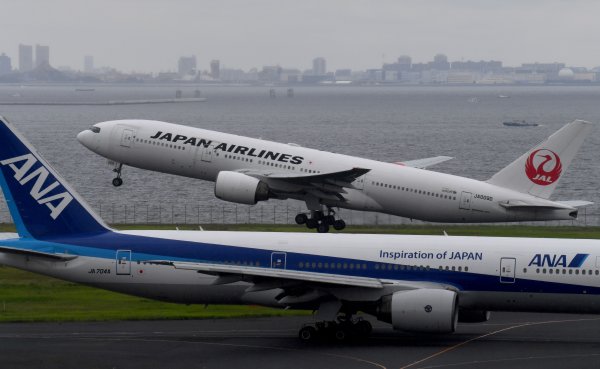 Watch Flames Erupt From a Japan Airlines Flight After a Bird Strike
Next Up: Editor's Pick