Earlier this week, a middle-aged woman who gave her name only as Jessica boarded an Amtrak train in Richmond, California, and made the three day trip eastward to Washington. In her bag was a red, white and blue T-shirt and a beanie that simply read “TRUMP.”

“Where I’m from, you’re not free to express your political opinions without harm or shunning,” she said, after declining to give her full name. “Free speech has been repressed by violence. You can’t have a Trump bumper sticker on your car. And listen — I don’t consider myself a Republican. I’m an American. But I love his agenda.”

Jessica was one of the hundreds of supporters of President Trump who gathered on the National Mall on Saturday for what was called the “Mother of All Rallies” — an event intended, according to promotional material, to “send a direct message to Congress, the media and the world that we stand united to protect and preserve American culture.”

The event was unusual — a rally for a political figure who was elected less than a year ago, without a specific proposal animating it. But the people who flocked to Washington on Saturday — many of whom had traveled from places like Florida, upstate New York, and Illinois — were simply delighted to make their voices heard.

The ominous clouds overhead never brought rain. For most of midday Saturday, Trump supporters dressed in their finest Americana kitsch stood in the shadow of the Washington Monument, listening to speakers who at times got caustic — imploring the President to “lock her up,” or heckling the lawmakers in the Capitol Building a mile up the lawn — but mostly gloated, reveling in the present political moment as songs such as Lou Bega’s “Mambo Number Five” played.

“Our movement is this: for a good thirty years, you had people feeling like they just had to accept,” Genevieve Peters, a schoolteacher with an enthusiastic pro-Trump Facebook presence, says. “Then came along a man who said, ‘No, you don’t have to accept this anymore. We need to start taking care of our citizens, make sure that jobs stay in the U.S., make sure that drugs stop coming over the border.’ And all of a sudden, people are going, ‘Oh my gosh, he’s saying what we’ve been saying for years!'”

“He’s a normal guy who’d rather be eating Kentucky Fried Chicken with the laborers than hanging out in some million-dollar club,” she continued. “And he knows how to make things happen. When the mainstream media is worried about the size of the heels that Melania is wearing, he’s five steps ahead of everyone, making sure five more companies haven’t left the country.”

The rally came at a time when Trump has faced something of a backlash among conservative commentators.

Earlier this week, the President reached a tentative compromise with congressional Democratic leaders Chuck Schumer and Nancy Pelosi that would enshrine in law the tenets of Deferred Action for Childhood Arrivals, the Obama-era program that allowed around 800,000 young immigrants to remain in the U.S., which the White House had previously announced it would nullify. The tone on many conservative news sites was livid, saying that the decision amounted to treachery — a denial of the anti-immigration platform on which Trump had been elected. Breitbart, the right-wing news outlet helmed by former Trump senior counselor Steve Bannon, dubbed him “Amnesty Don.”

The attendees on Saturday made it clear that there were no hard feelings.

“He’s making things happen,” 48-year-old Floridian Norman Ross, who wore a star-spangled T-shirt and four hoops in his ears, said. “He’s tired of the old division where you have to be a Republican or a Democrat. He’s a winner, and he’s doing whatever the hell it takes to get the job done.”

He then pointed to his wife, Melanie, who stood next to him. “She voted for Obama twice, and she loves our president,” he said. “How are you ‘losing your base’ when your base is growing?”

“I was a Democrat my whole life,” Melanie said. “But look at what our country has become. It was impossible for middle-class Americans to find jobs. All this talk about the racist stuff — it’s so false.”

The rally came a month after white nationalists marched in Charlottesville, Virginia, to protest the removal of a Confederate statue, an event which turned deadly when one marcher drove into a crowd of counter-protesters, killing a woman. President Trump was criticized for his response to the violence, which he blamed on both sides.

For many attendees at the rally on the National Mall, the criticism of Trump was unfair, part of what they saw as a narrative manufactured by the media to paint the president’s supporters as racist.

“I don’t think the president is racist, and we’re definitely not,” Angel Hill, an African-American Trump supporter, said. “That’s not what this is about. I like him because he says he’s gonna bring jobs back to America, and I truly believe he’s concerned about doing it.”

Saturday’s rally was mostly tranquil. Tensions flared later in the afternoon, when a group of so-called “antifa” activists, dressed in the black T-shirts and bandanas that identify their movement, stopped by en route to a protest held at the Lincoln Memorial by Juggalos, as fans of the music group Insane Clown Posse are known. A number of members of regional militia attended the Trump rally, and several of them confronted the antifa.

But these tensions subsided: the Trump supporters, sensitive to the potential negative P.R., made a point to engage with the activists, discussing issues in consciously measured voices, and eventually the two groups went on their way.

“A lot of them, their hearts are in the right place,” Igy Igyarto, one of the antifa members, said afterwards. “They feel left behind, and they don’t like the way they’ve been chewed up by the status quo. They’re good people looking for a way to respond to what they’re seeing around them.” 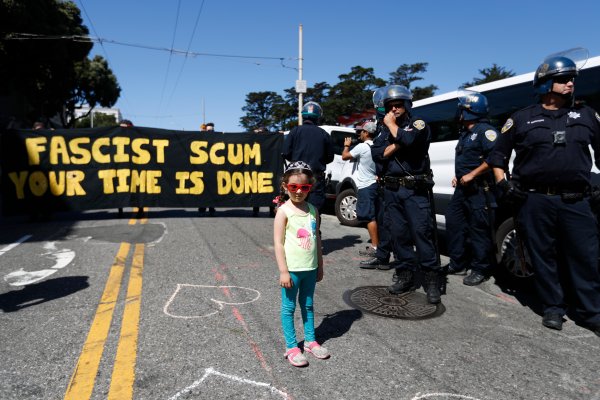