The preparations for Ben Shapiro’s speech at the University of California, Berkeley, had been intense. In advance of the conservative’s appearance on Thursday, the school shut down a big block of the campus. By early evening, police were roaming the area by the dozens, kitted out with riot gear and driving armored cars. Helicopters hovered above.

But by the time Shapiro’s speech let out around 9 p.m. local time, the night had gone without great tumult or physical injury reported by police – unlike several other run-ins the city has seen over the past year between extremists on the right and left.

There was still pushback on the liberal campus: Several hundred people arrived to peacefully protest, and a much smaller group of students occupied the student union, linking arms and repeating chants such as “What kind of speech is free? Only white supremacy.” Berkeley police have arrested nine individuals, some for offenses such as having banned objects in the area near where the speech was being held.

As with past events in the city, heated debates took place about what is free speech and what is hate speech and how college campuses should navigate the tense political climate. People in red “Make America Great Again” hats mingled tensely with people holding communist flags. Yet things were calm compared to previous clashes.

Inside the venue on Thursday, Shapiro disavowed white supremacists and the alt right, characterizing that part of the political spectrum as basing bad theories on “white identity politics.” He also put forth plenty of ideas that would rankle the left: that, for instance, immigrants should assimilate to “traditional American culture” and that poverty among black people has more to do with young black women having children out of wedlock than systemic racism. “In a free country, if you fail, it is probably your own fault,” he said.

At times, the former Breitbart writer descended into name-calling, characterizing the protestors outside as “dolts” and “idiots” who think “my speech is violence, all speech is violence.” He mocked Nancy Pelosi by making a joke about using Botox. He said that leftist protestors known as antifa – short for anti-fascist – could to “go to hell,” leading someone in the audience to yell, “Retards!”

Yet, as the evening wore on, the event started to feel more like a small-town council meeting than an event where a political personality throws red meat to his base. During a lengthy Q&A, Shapiro did what the Berkeley College Republicans say they invited him to do: have civil debate with liberal students who disagreed with his viewpoints. Berkeley students questioned him on everything from abortion to insurance rates, and the crowd clapped politely for some questioners who identified themselves as left-of-center.

The Berkeley College Republicans helped start the string of controversies by inviting provocateur Milo Yiannopoulos to speak at the campus in February, an event that had to be canceled due to safety concerns after violent protest. While many on the campus have accused the student group of trolling liberal students with their speaker choices, they have said this event was simply meant to air right-of-center ideas that are not the usual fare.

Outside the venue, students who took turns at a microphone spoke not just about Shapiro but about Yiannopoulos, too. Another conservative group on campus, Berkeley Patriot, has invited him as well Steve Bannon and a a slate of other conservative speakers to campus later this month for a multi-day “Free Speech Week” event. Though fears about violent groups from the right and left descending on campus had not materialized by late Thursday, university officials have expressed concern that “Free Speech Week” may prove to have a different ending.

Students, meanwhile, are bracing for more disruptions and counter-disruptions.

“It’s really exhausting that we’re at a time when free speech is being equated to having to accept views that most of the campus doesn’t like,” said sophomore Haden Modisett in the week leading up to the Shapiro event. “And we’re physically threatened by this. Why is it that we have to go through this every two weeks? Is this just something that we live in? Like a war zone?” 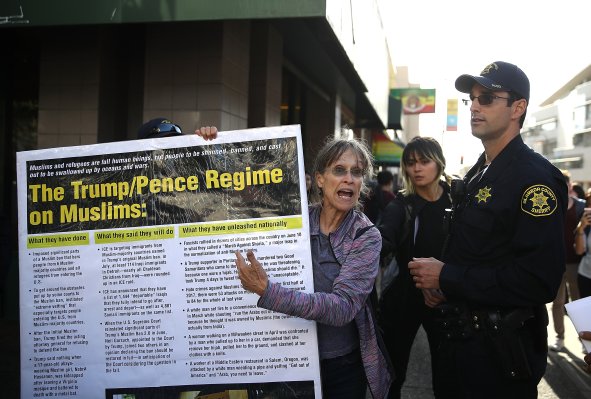