Here's Everything President Trump Has Ever Said About DACA

By Alana Abramson and Katie Reilly

President Trump has given conflicting signals in the past day about the fate of immigrants brought to the United States illegally as children.

After a dinner at the White House Thursday, Senate Minority Leader Chuck Schumer and House Minority Leader Nancy Pelosi said they were confident that a deal could be reached. Trump then said that a deal was “fairly close” but also that he wanted more out of the arrangement.

“We’ll only do it if we get extreme security, not only surveillance but everything that goes with surveillance,” he said Thursday. “If there’s not a wall, we’re doing nothing,” he added, speaking of his campaign promise to build a new security wall along the U.S.-Mexico border.

The overnight confusion about the future of the 800,000 undocumented immigrants currently protected by the Deferred Action for Childhood Arrivals program, or DACA, mirrors Trump’s conflicting statements since he became a presidential candidate in 2015.

At various times, Trump has promised to terminate the DACA program immediately and told so-called Dreamers that they have nothing to worry about.

Here’s what President Trump has most recently said about DACA, and how it contrasts with his previous statements.

“We’re working on a plan — subject to getting massive border controls,” Trump told reporters Thursday morning before embarking on a trip to Florida to assess damage caused by Hurricane Irma. “You have 800,000 young people, brought here, no fault of their own. So we’re working on a plan, we’ll see how it works out. We’re going to get massive border security as part of that. And I think something can happen.”

Two days after the Trump Administration announced its decision on DACA, the president tweeted that recipients of the program should remain calm. “For all of those (DACA) that are concerned about your status during the 6 month period, you have nothing to worry about – No action!” he wrote.

The tweet came just one day after the President struck a deal with Schumer and Pelosi to extend the debt ceiling for three months, and reportedly discussed his support for the DREAM Act — legislation that provides people who arrived in the U.S. as undocumented minors with their parents a pathway to citizenship— during the negotiations.

“I’d like to see something where we have good border security, and we have a great DACA transaction where everybody is happy and now they don’t have to worry about it anymore because, obviously, as you know, before, it was not a legal deal,” Trump said, referring to the fact that former President Obama had implemented the program via executive action.

Trump suggested he would leave it up to Congress to take legislative action on the program. He tweeted: “Congress, get ready to do your job – DACA!”

He also retweeted a post from an account criticizing illegal immigration. “Make no mistake, we are going to put the interest of AMERICAN CITIZENS FIRST! The forgotten men & women will no longer be forgotten,” the original tweet said.

Later that day, Trump released a written statement claiming that by implementing the program under executive action, President Obama was “violating the actions of our Republic” and Congress had to act in compliance with the legislative process. He also argued that DACA had “helped spur a humanitarian crisis,” by providing incentives for unaccompanied minors from South America to cross the border, some of whom became gang members.

“We’re going to show great heart. DACA is a very, very difficult subject for me. I will tell you. To me, it’s one of the most difficult subjects I have,” Trump said at a press conference in February.

“But you have some absolutely incredible kids — I would say mostly. They were brought here in such a way. It’s a very — it’s a very very tough subject. We are going to deal with DACA with heart. I have to deal with a lot of politicians, don’t forget. And I have to convince them that what I’m saying is, is right. And I appreciate your understanding on that,” Trump said.

“But the DACA situation is a very very, it’s a very difficult thing for me because you know, I love these kids,” he added. “I love kids. I have kids and grandkids and I find it very, very hard doing what the law says exactly to do.”

“They shouldn’t be very worried,” Trump said in an ABC News interview in January when asked how his policies would affect the Dreamers.

“They are here illegally. They shouldn’t be very worried. I do have a big heart. We’re going to take care of everybody. We’re going to have a very strong border. We’re gonna have a very solid border. Where you have great people that are here that have done a good job, they should be far less worried. We’ll be coming out with policy on that over the next period of four weeks.”

At the time, Trump said he would decide how to handle DACA in a few weeks after discussing it with Attorney General Jeff Sessions. In his announcement on Tuesday, Sessions called DACA “an unconstitutional exercise of authority by the executive branch.”

November 2016: “We’re going to work something out”

In the months shortly after his election, Trump voiced sympathy for immigrants who were brought to the U.S. illegally as children, calling it a “very tough situation.”

“We’re going to work something out that’s going to make people happy and proud,” Trump told TIME in an interview in November. “They got brought here at a very young age, they’ve worked here, they’ve gone to school here. Some were good students. Some have wonderful jobs. And they’re in never-never land because they don’t know what’s going to happen.”

August 2016: “We will immediately terminate” DACA

“We will immediately terminate President Obama’s two illegal executive amnesties, in which he defied federal law and the constitution to give amnesty to approximately 5 million illegal immigrants,” Trump said at a campaign event in August 2016, promising to end DACA as well as Deferred Action for Parents of Americans and Lawful Permanent Residents.

That speech echoed the promise Trump made when he launched his presidential campaign on June 16, 2015. “I will immediately terminate President Obama’s illegal executive order on immigration, immediately,” he said at that time.

Write to Alana Abramson at Alana.Abramson@time.com and Katie Reilly at Katie.Reilly@time.com. 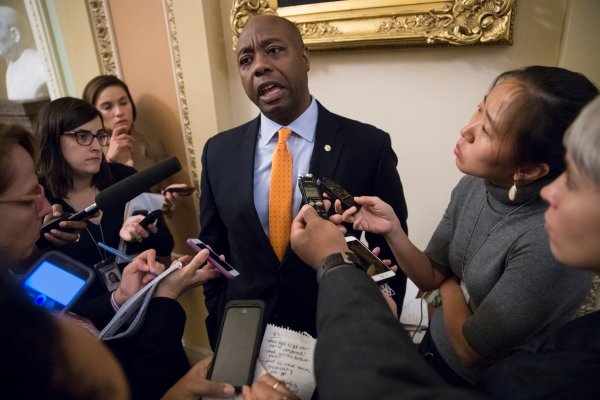 Senate's Only Black Republican Lectures Trump on Race
Next Up: Editor's Pick