Hillary Clinton on Wednesday slammed Donald Trump Jr.’s explanation of why he met with a Kremlin-connected lawyer at Trump Tower during the 2016 presidential campaign.

In his testimony to the Senate Judiciary Committee last week, Trump Jr., President Donald Trump’s son, denied any collusion with Russia and said he took the meeting to learn more about Clinton’s “fitness” for office.

“It’s ridiculous,” Clinton told the TODAY Show on Wednesday, when asked about Trump Jr.’s explanation. “It’s another absurd lie to cover up what really was going on, which I hope we finally uncover and understand.”

Asked how pained she was after the election, Clinton said it exceeded a scale of 1 to 10. “Well it’s gone down the scale,” she said. “It was probably 25 when the election ended in such a surprising and, for me, distressing way.”

In her new book, What Happened, Clinton analyzes the factors that she believes led to the outcome of the election, including Russian interference. “If I had been elected and this had come to light — if I had known once I walked into that Oval Office what we now know, I would have stopped at nothing to make sure this never happened again to anybody,” she told TODAY’s Savannah Guthrie and Matt Lauer on Wednesday.

Clinton mentioned Lauer in the book, criticizing him for focusing on her use of a private email server during NBC’s “Commander in Chief forum” in September 2016.

“Trump should have reported [Lauer’s] performance as an in-kind contribution. Later, there were rumors ginned up by fake news reports that I was so mad at him I stormed off stage, threw a tantrum, and shattered a water glass. While I didn’t do any of that, I can’t say I didn’t fantasize about shaking some sense into Lauer while I was out there,” she wrote, according to Politico.

“I personally believe that our press — which is such an essential part of our country, our democracy — has to take some hard look at how it covered what was the first reality TV candidate, and I understand how difficult that was,” Clinton said. 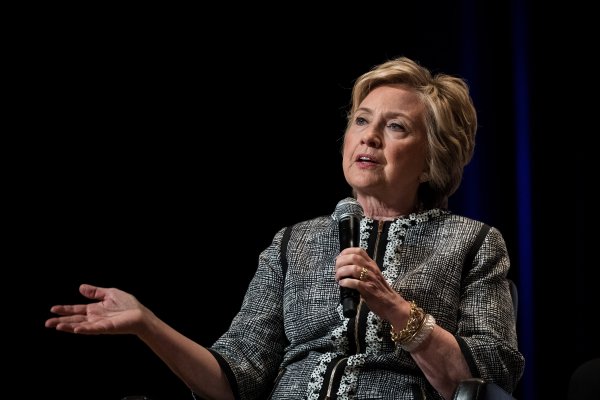 Here Are All the Books Hillary Clinton Name-Drops in Her New Memoir
Next Up: Editor's Pick