Aung San Suu Kyi, the Nobel laureate who now leads Myanmar, plans to sit out this year’s U.N. General Assembly as her government faces growing criticism over its handling of a humanitarian crisis on the country’s western border, where about 370,000 Rohingya refugees have fled military violence in recent weeks.

Government spokesman Zaw Htay told Reuters that Suu Kyi, who delivered a landmark address at last year’s assembly as Myanmar’s first civilian leader in decades, “is trying to control the security situation, to have internal peace and stability, and to prevent the spread of communal conflict.”

Suu Kyi and the Myanmar armed forces — which she does not command — have faced searing criticism since a deadly attack by Rohingya insurgents on Aug. 25 triggered a devastating military reprisal against militants and civilians alike.

In the weeks since, Suu Kyi has failed to either condemn or rein in the armed forces as they carried out what they call “clearance operations,” sending hundreds of thousands of civilians fleeing across the border into Bangladesh.

Refugees claim their villages have been burned to the ground and that security forces have indiscriminately killed villagers during the operation. The military has also been accused of laying landmines along the border as refugees attempt to flee.

The Rohingya are a stateless Muslim minority that has been subjected to decades of persecution in Buddhist-majority Myanmar, where they are viewed as illegal immigrants from Bangladesh. Zeid Ra’ad al-Hussein, the U.N. High Commissioner for Human Rights, said Monday that the crisis appears to be “a textbook example of ethnic cleansing.” 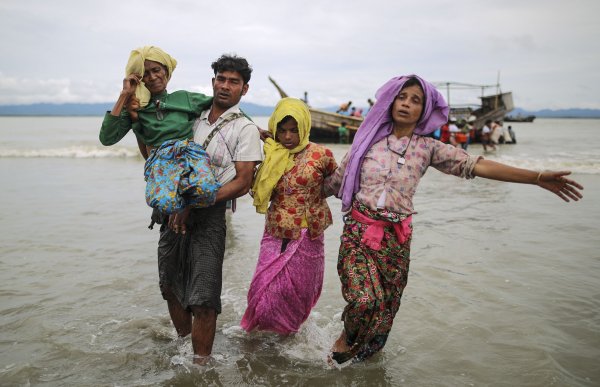 Why Myanmar Stands Accused of Ethnic Cleansing
Next Up: Editor's Pick