How Americans Could Have Cheap Health Care Almost Instantly

Battin, a Distinguished Professor of Philosophy and Adjunct Professor of Internal Medicine at the University of Utah, is the author most recently of The Ethics of Suicide: Historical Sources.

Can’t agree on health care, how to finance it or how to cover the uninsured? Think big. And look carefully: it’s right before our eyes.

Imagine comprehensive, universal, effective and cheap health care for all Americans, essentially overnight. It would require hiring more doctors, nurses and other health professionals as well as utilizing more hospitals and medical facilities, but it would be remarkably easy compared to all the other health care proposals afloat now. That’s because the medical expertise and the infrastructure to make this possible already exist — right here in our Veterans Affairs health care system.

What we need is a new, thoroughgoing, workable solution to our health-care problems. So here is a simple proposal: Over the next decade, beginning right away with those who are currently uninsured, let’s gradually build out the VA, or a redesigned VA-like civilian system, by funding it more instead of less. If proven effective, eventually health care at the VA could be offered as an option to all Americans — regardless of socio-economic status, age, disability or preexisting conditions — paid for by all as a modest increment in taxes, but virtually free to the patient (or free with a reasonable copay).

This suggestion isn’t entirely new. A decade ago, public policy expert Phillip Longman published a detailed proposal for how this might work in his book Best Care Anywhere. So why make it again now? Because the current president has the temperament to just do it. It is the best, cheapest, fastest way that President Donald Trump and Congress, in this fractured climate, could make good on Trump’s promise that there’d be something better than Obamacare — “insurance for everybody,” as he told the Washington Post, in which everyone is “beautifully covered.”

America’s VA is one of the world’s largest federally run health-care systems. It isn’t broken. Tax-supported, with salaried physicians and rigorous practice guidelines, it is in many ways better than some private health care. There’s a reason the VA’s so effective and yet so inexpensive, compared to private health care: it stresses evidence-based treatment and coordinated care, instead of bouncing patients from one doctor to another in an open-market system. It’s hard to argue that the VA isn’t good enough, especially for those facing a future with no insurance at all. It’s comprehensive, efficient, cost-effective and, except for some modest charges for prescriptions and a few other items and services, almost entirely free to patients and treasured by the veterans who use it.

Of course, the VA has its share of problems. Some concerns are systemic and serious; some are single-incident grievances. But in terms of quality of care, it outranks much of U.S. medicine. So rather than scaling back funding and privatizing the VA, as the Trump Administration has proposed, what if we fund it more and open its doors to all who are uninsured? Nothing need change about the private sector: insurance companies can continue to flourish if they offer their customers adequate coverage at a reasonable price. It would be a win-win for all.

What makes this proposed national solution different is that the VA isn’t just a single-payer solution. It is both single-payer and single-provider; it pays for the visit to the doctor’s office and is the doctor’s office. Instead of focusing on an elaborate (and confusing) system of tax credits and subsidies and commercial exchanges selling insurance coverage for people who have to buy health care on the open market — that’s the way the Affordable Care Act works — it’s about providing actual health care to people who need it.

Free to the consumer, however, doesn’t mean free. Someone will have to pay for this care. But the truth is we, as a society, already are. Patients who are commercially insured, philanthropic organizations, government programs and taxpayers already partly subsidize the health care of those who aren’t insured — an estimated $85 billion in uncompensated care per year.

The VA is uniquely poised to tackle health care efficiently. Unlike the traditional fee-for-service structure, which can perversely incentivize providers to do more in order to get paid more, the VA is structured to deliver preventive and appropriate care, to avoid under-treatment and over-treatment, and to catch physical and mental problems that can lead to costly social problems. It can spare doctors the hassle, and save the system the costs, of fee-for-service billing to medical middlemen and insurers. And it would protect people from sometimes crushing medical debt.

If by “almost overnight” we understand a phase-in that might take several years, maybe as much as a decade, this becomes a plausible suggestion for health care reform. We just need the President, and Congress, to act. The VA isn’t the same as the active military medical system, but nevertheless it is a federal agency with Cabinet-level status. A sitting president with a similarly motivated Congress could make opening the VA happen faster than almost any other health care reform possible, once they understood the human implications and the math.

Health care access for all? It is eminently doable. In fact, all the other nations of the developed world already have universal health care, organized in a variety of different ways but all at far lower cost and most with better outcomes. We’d finally catch up — and perhaps make America great, in this regard, for the first time.

This proposal glosses over any number of real-world problems of health care delivery and financing. We’d have to add pediatric services to the VA’s otherwise comprehensive menu of care, for example, and make sure VA facilities are geographically accessible to the uninsured. These challenges and certainly others would arise during the phase-in period. But if this proposed new public system reproduces the successes of the current VA, it will be both cheaper and higher in patient satisfaction. It should work. And if it doesn’t — if the prospect of real competition should cause the private sector to dramatically improve its performance and its pricing — then we’d still be far better off. 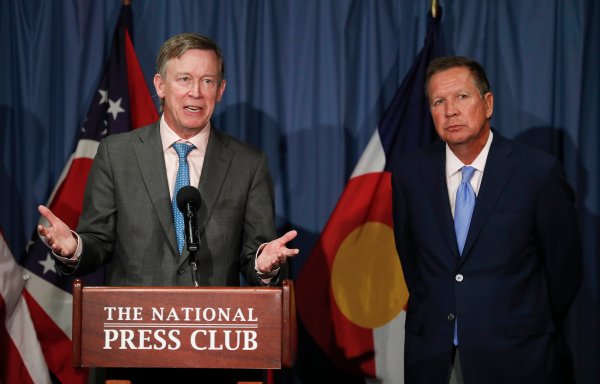 Govs. Kasich and Hickenlooper: A Bipartisan Approach to Stabilizing Our Nation’s Health Insurance System
Next Up: Editor's Pick