No, Trump Still Hasn't Changed His Mind About Climate Change After Hurricane Irma and Harvey

The White House said Monday that President Donald Trump has not altered his views on climate change, despite scientists’ warnings that Hurricanes Irma and Harvey, which recently ravaged portions of the United States, are evidence the warming global climate is making extreme weather worse.

In 2012, Trump referred to climate change as a “myth” propagated by the Chinese, and campaigned for President on withdrawing from the Paris Accords, a pledge he followed through on in June, when he announced that the U.S. would leave the agreement.

Last month, the Trump administration did not renew the Advisory Committee for Sustained National Climate Assessment, which is designed to help U.S. employees understand the government’s climate reports. And Scott Pruitt, who Trump selected to appoint as head of the Environmental Protection Agency, was a key player in legal attempts to quash then-President Obama’s Clean Power Plan, a set of policies designed to combat climate change. (Pruitt told CNN in a phone interview last week now is “not the time” to discuss climate change).

Sanders’ remarks come after Hurricane Irma, which struck Florida on Sunday, left more than 1.3 millionpeople in the state without power and caused at least 127,000 people to evacuate their homes, according to a count from the Associated Press. Irma came to Florida less than two weeks after Hurricane Harvey wreaked havoc on Texas and Louisiana, killing over 70 people, according to the AP.

Scientists have long said that climate change contributes to extreme weather events like hurricanes, but scientific developments in recent years have allowed them to look with increasing confidence at the relationship between individual events and warmer temperatures. As TIME’s Justin Worland explains, the air is able to increase its capacity for water by 7% for every degree Celsius of temperature rise, which essentially means that the warmer the air, the more water a storm holds and the greater the likelihood of flooding.

Trump, who visited Texas and Louisiana after Harvey and is planning on visiting Florida, announced he was donating $1 million of his own fortune to help those impacted by Hurricane Harvey, and has repeatedly lamented the catastrophic effects the storms have had on the United States.

“These are storms of catastrophic severity,” he said Monday. “When Americans are in need, Americans pull together — and we are one country.” 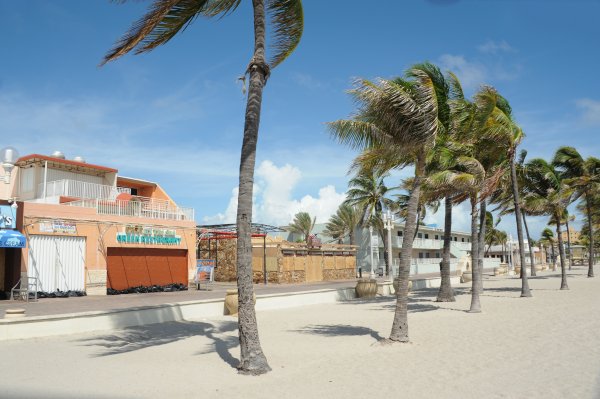 Miami Beach Is Spending $500 Million Preparing for Climate Change. But That Won't Help During Irma
Next Up: Editor's Pick