Apple just announced the iPhone X, it’s much-anticipated 10th anniversary iPhone. With a brand new design that includes an edge-to-edge screen, it’s the biggest change to the iPhone Apple has made in years.

As expected, the phone starts at $999 and will ship on November 3. Preorders for the new phone start on October 27.

“The first iPhone revolutionized a decade of technology,” Apple CEO Tim Cook said on stage. “Now 10 years later it is only fitting that we are here in this place on this day to reveal a product that will set the path for technology for the next decade.” It’s the first iPhone to come with an OLED screen, which is a different type of display technology that offers richer blacks and better overall contrast.

The iPhone X will be available in gray and silver finishes, and includes a new screen Apple calls a Super Retina display. It measures 5.8-inch diagonally and has a 2,436-by-1,135 pixel resolution.

It’s also the first and only iPhone without a home button — instead, you’ll wake up the phone by simply tapping the screen. Users will now swipe up from the bottom of the screen to navigate back to the home screen and launch the app switcher.

One of the biggest changes coming to the iPhone X, though, is facial recognition. This new Face ID feature is powered by a multi-optical system that includes an infrared camera, a dot projector and an ambient light sensor. Apple says the technology will also work in the dark and in real time, whether you’re wearing glasses or other accessories that may obscure the face. More importantly, Apple says it can’t be spoofed by photographs, which has been an issue with rival Samsung’s phones. Face ID will work with Apple Pay and third-party apps as well.

Apple showcased how its new facial recognition system could be used in Snapchat. When demonstrating the phone on stage, Apple’s Craig Federighi showed how the app’s mask-like filters fit more accurately on the face.

The iPhone X’s rear cameras are getting some improvements as well. Like the iPhone 8 Plus, it will have two cameras outfitted with 12-megapixel sensors (last year’s iPhone 7 Plus had a 12-megapixel camera on the rear but only a 7-megapixel camera at front). This phone, however, also has dual optical image stabilization, which means both cameras will be less susceptible to visual errors in shaky hands.

Like Apple’s other new iPhones, the iPhone X will support wireless charging. Apple is also launching a new charging mat that can be used to charge the iPhone X, Apple Watch and AirPods at the same time and distribute the power evenly, dubbed the AirPower charger. 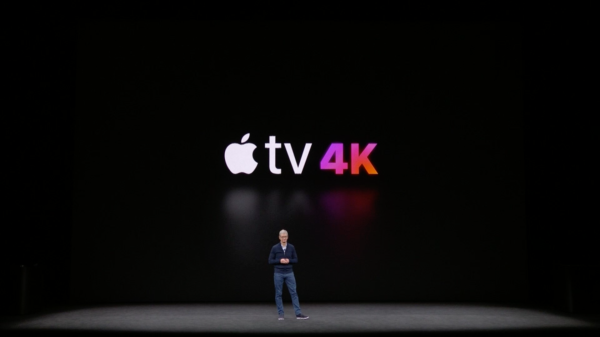 The Apple TV Is Finally Getting 4K Video
Next Up: Editor's Pick