'There Is No Home to Go Back to.' Hurricane Irma Flattens Barbuda, Leaving a Population Stranded

The Caribbean is no stranger to hurricanes, and so when Hurricane Irma struck on Tuesday night plenty on the island of Barbuda hunkered down to see it through. Elessa Harris, 22, said she knew this storm was different when she saw her “roof being lifted up by the winds.” In panic, she fled to a neighbors’ home as winds of up to 185 miles per hour buffeted the eastern Caribbean Island. She emerged on Wednesday to a changed world: Her entire village had been destroyed. “I have witnessed hurricanes before,” she says. “But nothing like this.”

The 68-square-mile island, which makes up one half of the dual island state of Antigua and Barbuda, was where the Category 5 hurricane first made landfall before it continued on its relentless churn through the Caribbean and up north to Cuba and the U.S., killing at least two dozen. Irma is the strongest Atlantic hurricane in history and Barbuda, known for its white-sand beaches, is among the worst hit islands, with 95% of its structures damaged. The island’s only hospital, its schools, and its airport now lie in ruins and officials estimate that it will cost more than $100 million to rebuild the island’s homes and infrastructure — a hefty fee for the indebted nation with a GDP of less than $2 billion.

Locals were evacuated to the sister island of Antigua, where the Sir Vivian Richards cricket stadium has been turned into a temporary shelter for more than a hundred of the 1,800 homeless Barbudans. The displaced described scenes of devastation in the morning after the storm: rows of felled palm trees, a shipping container in someone’s back yard, downed power lines and buildings reduced to rubble. “If the houses were not made of concrete, I believe everyone would have died,” said native Barbudan John Thomas, 47. Not everyone survived, however; a 2-year-old child was killed as his parents attempted to flee the storm.

With the storm now lashing the United States, Barbudans are trying to reckon with the enormous project of rebuilding. The island’s supporting infrastructure is completely destroyed, said Philmore Mullin, Director of Barbuda’s National Office of Disaster Services, on Sunday. “Public utilities need to be rebuilt in their entirety,” he said. “It is optimistic to think anything can be rebuilt in six months … In my 25 years in disaster management, I have never seen something like this.”

For now, Barbudans are relying on the generosity of Antiguans to survive. Silby Charles, 40, closed his street food stall soon after hearing about the hurricane and focused on providing Barbudan comfort food for the newly homeless in one of the many temporary shelters. “I provide free breakfasts and lunches for six hundred people” he says. “It is because they have gone through so much.” The government of Antigua and Barbuda has mobilized private citizens to help with the disaster relief and manage donations from the public. “I am stunned by it all but am heartened people pitched up and to put themselves out there to help us,” says Harris.

As the sun sets over the Sir Vivian Richards Stadium, a local band begins tuning their instruments for a performance to lift the spirits of the temporary residents. “You feel devastated after a storm like that,” Thomas says. “I am feeling slightly better now, but what makes me sad is there is no home to go back to.” 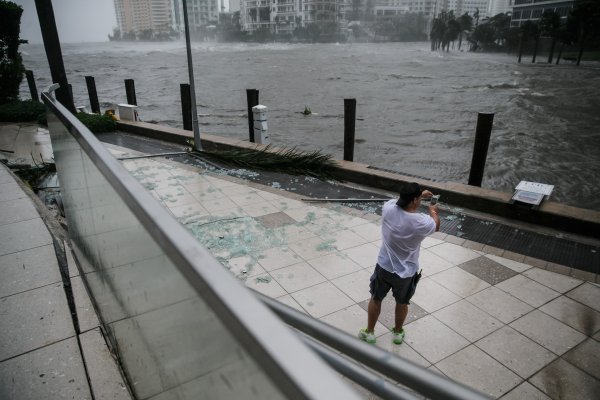