The highly anticipated It is here — and it’s already smashed a number of box office records.

Produced by Warner Bros. and New Line Cinema, the adaptation of Stephen King‘s thriller scored $117.2 million at the domestic box office during its opening weekend and another $62 million overseas for a total global start of $179.2 million.

The movie smashed records for the biggest box office opening ever for the month of September — and has one of the largest openings of the year. It also surpassed 2011’s Paranormal Activity 3 for the largest opening day for a R-rated thriller, and had the biggest start for any King adaptation (which includes films like Carrie and The Shining), according to The Hollywood Reporter.

The horror film follows a group of kids as the evil Pennywise the clown emerges from sewers to terrorize them and their town. The film was directed by Andy Muschietti, best known for Mama, and stars Bill Skarsgard as Pennywise.

The film received generally positive reviews from critics and earned 86% on Rotten Tomatoes. Some have viewed the film as not as terrifying as King’s novel, including TIME film critic Stephanie Zacharek.

“As always, the horrors you get a close look at are much less terrifying than those that remain unseen,” Zacharek writes about the movie. “And that’s the chief problem with adapting any Stephen King novel: Nothing ever looks as scary on-screen as it does in our minds, when we’re sitting alone with a book. With It, seeing isn’t the same as believing.”

The film’s massive debut comes after a lackluster summer at the box office, which had its worst weekend in 16 years in August. It dominated its competition this weekend, too, with Home Again, starring Reese Witherspoon, earning just $9 million for the second highest spot domestically. The Hitman’s Bodyguard, starring Samuel L. Jackson and Ryan Reynolds, came in third after sitting at the top of the box office for several weeks. 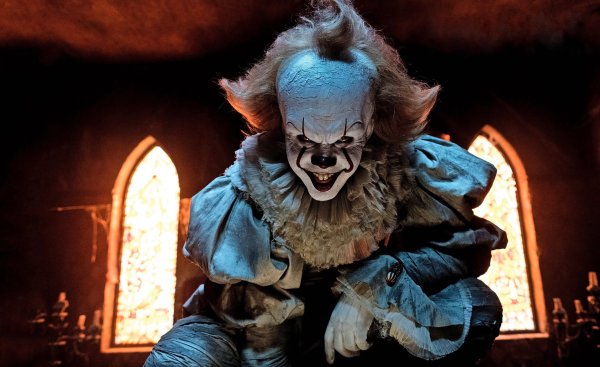 Review: 'It' Can't Match the Horror of King's Classic
Next Up: Editor's Pick