How Hurricane Irma Can Cause Tornadoes

As the powerful and deadly Hurricane Irma makes landfall in Florida after causing devastating destruction in the Caribbean, forecasters are warning of another related danger: tornadoes.

The National Weather Service’s Storm Prediction Center issued tornado warnings for a large swath of east-central and southern Florida late Saturday night, affecting cities including Miami. At least one reported tornado has already touched down in Oakland Park, Fla. as of Sunday morning.

The warning comes as conditions are ripe for tornadoes within the bands of Hurricane Irma.

But how do hurricanes create tornadoes?

While tropical cyclones and tornadoes are both vortexes that swirl in the atmosphere, they have different structures, according to the National Oceanic and Atmospheric Administration, or NOAA. Hurricanes are much larger with multiple storms within them, and they form over oceans or other large bodies of water. Tornadoes are typically the product of single storms and usually form over land, except in the case of some waterspouts.

However, when a hurricane makes landfall, it can create ideal conditions for tornado formation. As tropical cyclones (like hurricanes) begin to die off, the atmosphere becomes unstable as winds near the surface weaken while higher altitude winds remain strong. That instability, paired with a strong vertical wind shear, can spawn tornadoes.

Hurricane-generated tornadoes aren’t much different from other tornadoes. But they are often weaker, according to the National Hurricane Center. They typically do not get stronger than F2 on the Enhanced Fujita scale, which measures the strength of tornadoes. And tornadoes typically strike a small, concentrated area before dying off.

But tornadoes formed by a hurricane can still pose a threat to lives and property, particularly after an area has already been hit with hurricane-force winds, flooding and storm surge.

It’s common for tornadoes to form in the wake of a hurricane. “Almost all tropical cyclones making landfall in the United States spawn at least one tornado,” the NOAA says. Hurricane Ivan has the record for most tornadoes generated by a tropical cyclone (117 in 2004.) Tornadoes also formed as a result of Hurricane Katrina in 2005. 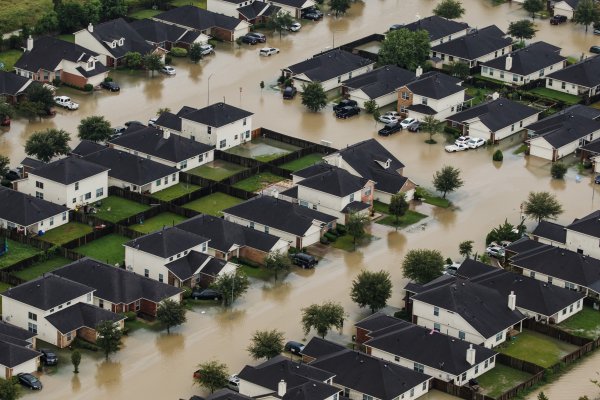 What You Need to Know About Boarding Up Your Windows Before a Hurricane
Next Up: Editor's Pick