Natural disasters were once entirely natural — and most still are. Hurricanes, however, may be a different matter. As Hurricane Irma roars toward Florida, Hurricanes Jose and Katia churn in the Atlantic Ocean and the Gulf of Mexico, and Houston picks up after Hurricane Harvey, the familiar question is being raised: what role does climate change play in all this volatility?

Climate scientists say that while a definitive answer is impossible, because the climate is unfathomably complex, there is a vast and growing body of evidence that points toward global warming having an impact on the formation and severity of hurricanes. Heidi Cullen, the chief scientist at the environmental advocacy group Climate Central, compares the cause and effect between climate change and hurricanes to the one that was long ago established between smoking and lung cancer: the risk factors are there, the disease process is understood and even if you can’t definitively determine why any one person got sick, the trends and evidence are clear.

Adds Sarah Kapnick, a researcher at the National Oceanic and Atmospheric Administration: “You fit all the data together, and as you get higher and higher values of precipitation, it becomes less and less likely without climate change.” Here are the top five mechanisms that make a solid case for a human role in the rise of hurricanes:

Hurricanes begin with atmospheric heat. As air grows warm, it rises, which creates an area of low pressure beneath it. That acts as a sort of suction, drawing in more warm, surrounding air, which joins the gathering, rising mass. Over land, this doesn’t necessarily cause much trouble, but over the ocean, the air carries water with it, which hurricanes love. And the hotter the air is, the wetter it can get. For every 1° C (1.8° F) increase in temperature, the atmosphere can hold an average of 7% more water. Global atmospheric temperatures have been on a steady upward march for decades, and currently stand 1.78° F (.99° C) above the 1951 to 1980 average. Seasonal variations can be even more dramatic. The previous two Julys were the hottest in 137 years of record-keeping. Heat like that does not dissipate right away, but hangs around, keeping the atmospheric engine primed when hurricane season begins.

Once a hurricane gets started, it needs to keep itself continuously fueled, and warm ocean water does that job two ways. The heat provides the energy the storm system needs to keep churning, and the water the clouds drink up will pour back down as rain. Ocean surface temperatures from 1901 to the present have increased 0.13°F (.072° C) per decade, and at least half of the ocean warming that’s taken place since as far back as 1865 has occurred in just the past two decades. “A warmer ocean makes a warmer atmosphere. A warmer atmosphere can hold more water,” says Gabriel Vecchi, a professor of geosciences at Princeton University. “So all other things being equal, the same storm on a warmer planet will give you more rainfall.”

Not only can climate change breed more hurricanes, it may also be able to steer them right toward the places they can do the most damage. The world’s oceans are shot through with a highway system of currents, transporting heat and cold around the planet. In the northern hemisphere, some of this process is governed by a hot-cold cycle known as the Atlantic Multidecadal Oscillation (AMO), which, as its name suggests, involves predictable temperature shifts in the Atlantic Ocean playing out over long periods — on the order of 60 to 80 years. A new analysis published last week in Science argued that climate change may be disrupting the AMO rhythm, keeping warm ocean currents streaming past the North American coast long past the time they should have shifted to their cool phase. “Shifts in the AMO reverberate through the climate system,” wrote the author of the Science analysis. In this case, the reverberation will draw hurricanes up to higher and higher latitudes — endangering more and more population centers in the process.

The depth of an ocean does not play any role in the formation of a hurricane, but it’s a huge player in how much damage the resulting storm can do. With global ice cover — especially over Greenland and Antarctica — at historic lows, sea levels have risen an average of 8 in. (20 cm) planet-wide since 1880. That increase can be higher or lower at any given point along any coast. In Galveston, Texas, for example, which sustained $23 billion worth of Harvey-related damage, sea levels have risen 12.5 inches (32 cm). New Orleans is expected to see increases of as much as 14.5 in. (37 cm) by mid-century. Storm surges that crash ashore during hurricanes do enough damage already without giving them an extra foot or more of free water to work with.

Put this in the category of no good deed going unpunished: More than 45 years ago, the U.S. achieved one of its greatest environmental victories, passing the Clean Air Act, which aimed to reduce the toxic, sky-darkening pollution that hovered over so many American cities. The law has done just that, cutting overall pollutant levels by at least 70% across the country. The U.S., of course, has not been alone in these efforts, and since the atmosphere knows no borders, clearer skies in any one part of the world mean clearer skies everywhere. In an era of accelerating warming, however, that good news is partly bad news. The decline in aerosol and particulate levels in the atmosphere admits more sunlight, which greenhouse gasses then trap, exacerbating the increasing warming.

The answer, of course, is not to return to the era of dirty skies. It’s to make them cleaner still, eliminating or at least reducing greenhouse gasses in the same way we reduced soot, lead, sulfur dioxide and more. A volatile climate, as we’re learning in the destruction wrought by serial storms, plays for keeps. If the meteorological violence of this hurricane season doesn’t serve as a powerful warning, it’s hard to imagine what will. 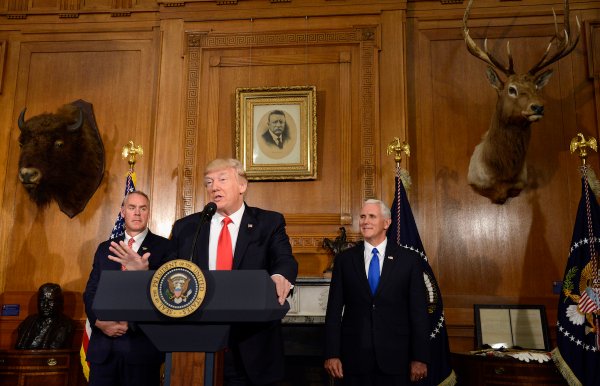 Could a President Get Rid of a National Monument? Here's Why the Answer's Complicated
Next Up: Editor's Pick