Stephen Colbert was as quick to poke fun at President Trump and his administration as ever on The Late Show Thursday night. This week, Steve Bannon, the president’s recently-ousted chief strategist, bore the brunt of the digs contained in Colbert’s opening monologue.

Bannon’s first formal television interview, with Charlie Rose on CBS, will be broadcast this Sunday – and Colbert had a few things to say about it. “This Sunday, Bannon’s making his first post-White House TV appearance right here on CBS,” he said. “Surprisingly, it is not as a corpse on NCIS. How long was this guy floating in the harbor?'”

Colbert then discussed Bannon’s defense of Trump when the President delayed calling out violent white supremacists following the protests in Charlottesville. He played a clip of Bannon talking about the issue with Rose, in which the former chief strategist says he was “the only guy that came out and tried to defend [Trump].” “I was the only guy that said, ‘He’s talking about something, taking it up to a higher level,” he adds in the clip.

The camera then panned back to Colbert, who smirked: “Yeah he’s definitely taking it up to a higher level.” The comedian then lifted his right up into the air – demonstrating a Nazi salute.

“And over here [and] somewhere up there,” he added, upping the ante by making two more Nazi salutes as both groans and laughter could be heard among the audience. Trump has responded to Colbert’s previous jabs by calling him a “no-talent guy.” But the edgy bits are working for Colbert, who has seen a ratings bump since Trump’s inauguration. 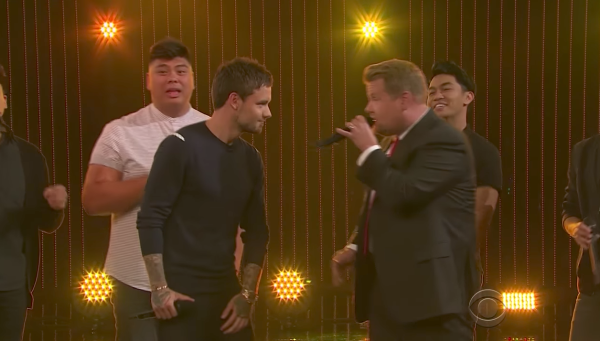 Watch Liam Payne & James Corden Battle It Out in a Riff-Off
Next Up: Editor's Pick