Everything You Need to Know About the 2018 Winter Olympics

The 2018 Winter Olympics are underway, and this iteration of the international games will include new events, new ways to watch and, most likely, new records.

Here’s everything you need to know about the 2018 Winter Olympic Games, including when and where the Olympics are taking place:

Where are the 2018 Winter Olympics?

The 2018 Winter Olympics are being held in PyeongChang in South Korea. After previous failed bids, the city beat Munich, Germany, and Annecy, France, as the venue for the upcoming games during the International Olympic Committee’s 123rd IOC Session in South Africa in 2011.

While PyeongChang has never hosted an Olympics, Seoul hosted the 1988 Summer Olympics. This event will be the first time South Korea has hosted a Winter Olympics. More than 100 miles east of Seoul, PyeongChang County is located in the Gangwon province of South Korea in the Taebaek Mountains. PyeongChang’s elevation makes it a popular destination for hiking and skiing. Many of the events will be held at Alpensia Sports Park, which is part of the popular Alpensia Resort in the county.

When will the Olympics start?

The Olympic Games began on February 8, 2018, and end February 25, 2018. While the Games’ Opening Ceremony will take place on Friday, February 9, the first competitive events happened on February 8.

What sports are in the Winter Olympics?

Within the 15 sports, there are 102 events where athletes will have the chance to earn a gold, silver or bronze medal for their countries. In 2018, six new medaled events were added to the schedule. Those events include a team event for alpine skiing, mixed doubles curling, men’s and women’s big air for snowboarding and men’s and women’s mass start for speed skating.

Which U.S. athletes will be competing?

The Winter Olympics in PyeongChang has the highest number of athletes ever to compete in a Winter Games. Organizers said 2,925 athletes from 92 countries will compete this year.

Two hundred and forty-two of those athletes are competing for Team USA — about 12 more than those who did in Sochi in 2014.

While it is a record for the Winter Olympics, the number of those participating is still smaller than the number of athletes who regularly participate in the Summer Olympics. In Rio in 2016, more than 10,500 athletes competed, with 558 of them representing the U.S.

Here’s a list of athletes who will compete Team USA at the 2018 Olympics:

Mikaela Shiffrin: Shiffrin will be the returning slalom champion this year, after being the youngest champion in that event in Olympics history in Sochi in 2014. At age 22, she currently has the second-most World Cup wins by an American woman — behind Vonn.

Lindsey Vonn: After injuries kept her out of the 2014 Olympics, Vonn is gearing up for a triumphant return. In 2010, she was first American woman to ever win the gold medal in the 2010 downhill race. She has also won four overall World Cup championships.

Maia and Alex Shibutani: The siblings are three-time World medalists, earning bronze in ice dancing in 2017. They appear to be the new pair to watch, after 2014 Sochi gold medalists Meryl Davis and Charlie White announced they would not compete to defend their title in PyeongChang.

Erin Hamlin: A three-time Olympian, Hamlin was the first ever female American luger to win a medal in luge after taking home bronze in Sochi.

Shaun White: A two-time Olympic gold medalist, White is focusing this year solely on the halfpipe. Though he won the event previously, White placed fourth in Sochi. The athlete also has the record for the most X Games gold medals.

Chloe Kim: Though she was too young to compete in Sochi, Kim could leave a huge mark on the halfpipe for Team USA. At the 2016 U.S. Grand Prix at age 15, Kim became the first woman to land back-to-back 1080s on the halfpipe, in an event where she scored a perfect 100 points.

After finishing fourth at the 2018 U.S. Figure Skating Championships in Jan., Ashley Wagner, an American figure skating, did not qualify this year despite being an Olympics favorite.

How can I watch the Olympics on TV?

NBC is once again broadcasting the Olympics — but this time, the network is changing it up. For the first time, NBC is broadcasting the Olympic Games live in all time zones. In the past, U.S. viewers had to wait to watch delayed tape of the events — with the most anticipated events often appearing during primetime. This meant many viewers were susceptible to spoilers before having a chance to see the competition unfold.

NBC Universal networks like NBC, NBCSn, CNBC and USA Network, are broadcasting the Games. The Winter Olympics can also be live streamed or watched on demand on NBCOlympics.com, as well as on the NBC Sports app.

In November, NBCUniversal announced its preliminary TV schedule, saying it would stream 2,400 hours of these games — a record for the NBC in its streaming of Winter Olympics games. Coverage of the games began on Wednesday, Feb. 7 at 11 p.m. ET on NBCSN — which aired mixed doubles curling.

“There will be more live hours of Winter Olympics coverage in PyeongChang than ever before, and for the first time at a Winter Games, NBC will broadcast live across all time zones to the entire country, creating a unique national collective experience for this event,” Jim Bell, the president of NBC Olympics Production and Programming, said in a statement.

You can expect to watch the Olympics on NBC for the foreseeable future. The network has ownership of the rights for the games through 2032. However, the network’s longtime primetime anchor Bob Costas will no longer fill that role. Mike Tirico will take Costas’s place.

Will Russia compete in the 2018 Winter Games?

The International Olympic Committee (IOC) suspended Russia from the 2018 Winter Games in PyeongChang following a systematic, state-supported doping scheme that allowed its athletes to use performance-enhancing drugs.

The decision comes after a three-year investigation into Russian doping before and during the 2014 Winter Olympic Games in Sochi, where Russia won the most medals of any other country. The report found “the systemic manipulation of the anti-doping rules and system in Russia,” according to the Olympics.

Russia is a dominant force in Winter sports arenas and it’s possible the implications of the IOC’s decision could impact who comes out on top.

Will North Korea compete at the 2018 Olympics?

North Korea is sending a delegation to the Winter Olympics in PyeongChang this year — a decision made after the first talks between the country and South Korea in more than two years.

The delegation includes athletes, officials, a cheer squad — and joint ice hockey team with South Korea. The International Olympic Committee had extended its October deadline to allow for North Korea to enter to compete in the games. North Korean figure skating team Ryom Tae-ok and Kim Ju-sik qualified for the Olympics back in September 2017, but it will be up to North Korea’s Olympic Committee to decide whether to send them to PyeongChang, their coach told the New York Times.

However, North Korea boycotted the Olympics held in Seoul and did not participate in Sochi. In a 1987 plot to disrupt the 1988 Winter Olympic Games in Seoul, North Korean agents placed a bomb on a Korean Air flight that killed all 115 people on board.

In his New Year’s Day speech ahead of the talks between the two countries, North Korea leader Kim Jong-un said he wished to send a delegation to South Korea for the games. “We sincerely hope that the South will successfully host the Olympics,” he said, according to the New York Times.

Are there any other controversies ahead of the Olympics?

Henrik Lundqvist #30 of Sweden defends his goal as Sidney Crosby #87 of Canada closes in during the Men's Ice Hockey Gold Medal match on Day 16 of the 2014 Sochi Winter Olympics at Bolshoy Ice Dome on February 23, 2014 in Sochi, Russia. (Pool—Getty Images)
Pool—Getty Images)

The Olympic Organizing Committee struggled with ticket sales ahead of the 2018 Winter Olympics due to a number of factors, including military tension in North Korea and recent corporate and political scandals in South Korea. Officials had hoped for more than 1 million spectators — including 750,000 locals — to enjoy the Games, but sales to get there were slow-moving. Officials had hit just 55% of their sales target by December 2017, though its possible the two months leading up to the Games had heightened sales. (A representative from the Organizing Committee did not immediately respond to a request from TIME.)

Also, the National Hockey League announced it would not participate in the Winter Olympic Games — which means the league won’t provide accommodations for its athletes and will not include a break for the Olympics in the 2017-2018 NHL season schedule. The decision came after a dispute with the International Olympic Committee over whether the IOC would cover the costs incurred by NHL players participating in the event, as the IOC had done in the past. The IOC decided not to pay these costs in 2018. The NHL did not participate in the 1988, 1992 or 1994 Winter Olympics due to the interruption required in its schedule.

What is the official Winter Olympics mascot this year?

Following several decades of tradition, the 2018 Winter Olympics has its own mascot. “Soohorang,” an animated white tiger, is the symbol for the upcoming Olympics. In Korea, the white tiger is known as the country’s “guardian animal,” according to the Olympics’ website.

The name “Soohorang” is a combination of several Korean words meant to symbolize the Olympics and the mascot. “Sooho” means “protection” in Korean; “rang” comes from the Korean name for tiger, “ho-rang-i,” as well as the folk song “Jeong-seon A-ri-rang,” the traditional song of the Gangwon Province, which is where the Olympics will take place.

This photo taken February 4, 2017 shows the mascot for the 2018 Pyeongchang Winter Olympic Games, a white tiger named "Soohorang", in the town of Hoenggye in Pyeongchang.
Jung Yeon-Je—AFP/Getty Images

The tradition of having an Olympic mascot started in Grenoble during the 1968 Olympics with “Schuss,” a skier. Mascots now generally take the form of an animal, with some Olympic Games opting for several mascots to represent the special event.

At the 2016 Summer Olympics in Rio de Janeiro, “Vinicius,” a combination of a cat, monkey and bird, was the mascot and symbolized wildlife found in Brazil.

Which country won the most medals in the 2014 Sochi Olympics?

In the last Winter Olympics, Russia came out on top with 33 medals. The United States earned the second-most with 28, and Norway came in third with 26. 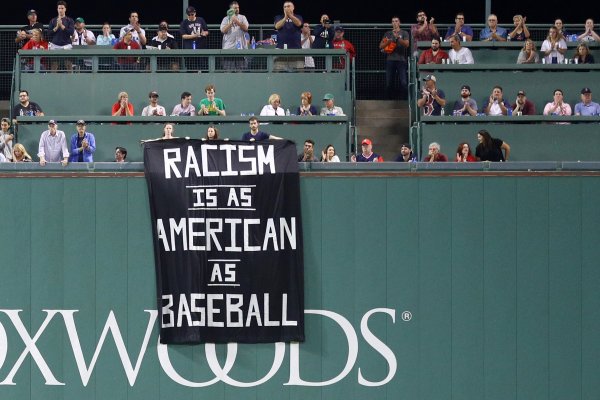 'Racism Is as American as Baseball' Unfurled at Fenway
Next Up: Editor's Pick