Miami Beach Is Spending $500 Million Preparing for Climate Change. But That Won't Help During Irma

Miami Beach stands out on the long list of cities most vulnerable to the risks of climate change — including sea level rise and hurricanes — as one of the few that has actually taken meaningful steps to prepare. Three years ago, the city launched an elaborate $500 million plan to elevate streets and install pumps that remove water during times when the city would otherwise flood.

It remains to be seen how Miami Beach will fare — there’s still an increasingly slim possibility that the storm shifts direction — but the city offers a cautionary tale about the nature of climate change and human adaptation. Scientists expect the most extreme weather events to happen with increased frequency in the coming years, and human adaptation can only offer so much cover. No sea walls or water pumps can adequately prepare for the most dangerous storms.

“We’re headed for a total environmental catastrophe if we just keep doing this,” Harold Wanless, a geology professor at the University of Miami, said last year of failure to address man-made climate change. “It’s going to get messy, and it’s not just high tide.”

The challenge lies in adapting to both the everyday challenges of climate change and the potential for extreme events. Until recently, streets in Miami Beach flooded frequently even without rain — called sunny day flooding — as water seeped in through the ground. Those floods, which are exacerbated by sea level rise attributed to warmer temperatures, are a major annoyance for residents and businesses, even if they do not immediately threaten human life or cause widespread destruction of property. The pumps, along with the elevated streets, solved the frequent flooding problem, at least for now, but did little to protect against a hurricane like Irma.

“I don’t think there has been such a focus on the extremes, in part because of what you would need to do to combat them,” says Robert Muir-Wood, chief research officer at RMS, a risk modeling company. “You would need to build walls around the edge of Miami Beach, you would need to block off every possible way in which water can come through land, through pipes and through natural cavities in the rock.”

Many engineers and scientists remain skeptical that such a solution would be technologically feasible, given the difficulties of plugging the porous limestone that forms the city’s foundation. And, even it were feasible, engineers say its cost would likely be prohibitive.

That difficult reality has driven many critiques of Miami Beach’s adaptation efforts. Officials in the region acknowledge that pumping water will not work forever if humans do not reduce greenhouse gas emissions and, in turn sea level rise, but they hope that the aggressive program will buy them time. “We’ve been tasked with run before you crawl,” said Miami Beach Public Works Director Eric Carpenter last year. “ We’ve won the first battle, but we still have a long way to go.”

Unfortunately, hurricanes like Irma may force the next battle sooner rather than later.

Correction: The original version of this story misstated the status of the $500 million Miami Beach is spending to prepare for climate change. The city is in the process of spending the money, but has not spent all of it yet. 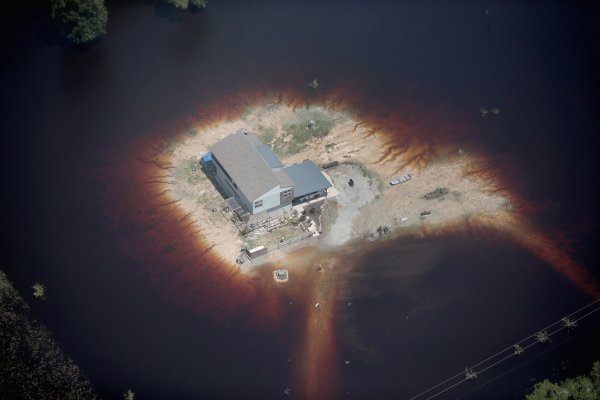 The One Number That Shows Why Climate Change Is Making Hurricane Season Worse
Next Up: Editor's Pick