Here's What President Trump Has Said About DACA in the Past

The Trump Administration announced Tuesday it will phase out the Obama-era Deferred Action for Childhood Arrivals program, or DACA, which protected nearly 800,000 immigrants who were brought to the U.S. illegally as children, allowing them to live and work in the U.S. without fear of deportation.

Trump campaigned on a promise to crack down on illegal immigration, saying he would “immediately terminate” DACA if elected. But since taking office, he had voiced more sympathy toward the DACA-protected immigrants, often known as “Dreamers.”

Here’s what Trump has previously said about DACA:

“Congress, get ready to do your job”

On Tuesday, Trump suggested he would leave it up to Congress to take legislative action on the program. He tweeted: “Congress, get ready to do your job – DACA!”

He also retweeted a post from an account criticizing illegal immigration. “Make no mistake, we are going to put the interest of AMERICAN CITIZENS FIRST! The forgotten men & women will no longer be forgotten,” the original tweet said.

“We’re going to show great heart. DACA is a very, very difficult subject for me. I will tell you. To me, it’s one of the most difficult subjects I have,” Trump said at a press conference in February.

“But you have some absolutely incredible kids — I would say mostly. They were brought here in such a way. It’s a very — it’s a very very tough subject. We are going to deal with DACA with heart. I have to deal with a lot of politicians, don’t forget. And I have to convince them that what I’m saying is, is right. And I appreciate your understanding on that,” Trump said.

“But the DACA situation is a very very, it’s a very difficult thing for me because you know, I love these kids,” he added. “I love kids. I have kids and grandkids and I find it very, very hard doing what the law says exactly to do.”

“They shouldn’t be very worried”

“They shouldn’t be very worried,” Trump said in an ABC News interview in January when asked how his policies would affect the Dreamers.

“They are here illegally. They shouldn’t be very worried. I do have a big heart. We’re going to take care of everybody. We’re going to have a very strong border. We’re gonna have a very solid border. Where you have great people that are here that have done a good job, they should be far less worried. We’ll be coming out with policy on that over the next period of four weeks.”

At the time, Trump said he would decide how to handle DACA in a few weeks after discussing it with Attorney General Jeff Sessions. In his announcement on Tuesday, Sessions called DACA “an unconstitutional exercise of authority by the executive branch.”

“We’re going to work something out”

In the months shortly after his election, Trump voiced sympathy for immigrants who were brought to the U.S. illegally as children, calling it a “very tough situation.”

“We’re going to work something out that’s going to make people happy and proud,” Trump told TIME in an interview in November. “They got brought here at a very young age, they’ve worked here, they’ve gone to school here. Some were good students. Some have wonderful jobs. And they’re in never-never land because they don’t know what’s going to happen.”

“We will immediately terminate” DACA

“We will immediately terminate President Obama’s two illegal executive amnesties, in which he defied federal law and the constitution to give amnesty to approximately 5 million illegal immigrants,” Trump said at a campaign event in August 2016, promising to end DACA as well as Deferred Action for Parents of Americans and Lawful Permanent Residents.

That speech echoed the promise Trump made when he launched his presidential campaign on June 16, 2015. “I will immediately terminate President Obama’s illegal executive order on immigration, immediately,” he said at that time. 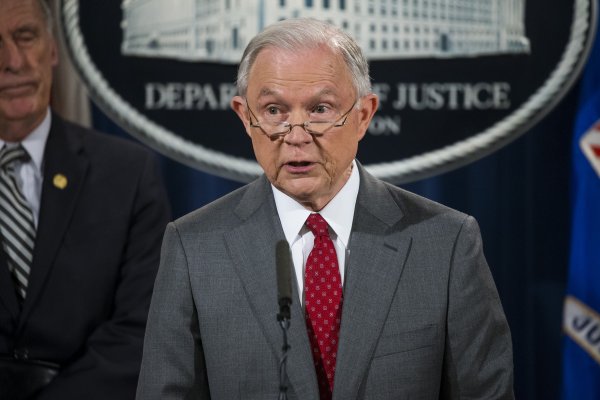