John McCain to Foreign Allies: Despite Trump's Actions, America Is Still Committed to You

In a speech urging unity and advocating America’s leadership, Arizona Sen. John McCain emphasized the importance of the country’s relationships with foreign allies amid an uncertain time in America at an international economic and policy conference in Lake Como, Italy.

McCain, who attended the Ambrosetti Forum this weekend with his colleague Sen. Lindsey Graham, pointed to rhetoric from President Donald Trump as a reason some of these long-lasting relationships have been in doubt.

“I realize that I come to Italy at a time when many are questioning whether America is still committed to remaining engaged in the world, to upholding our traditional alliances, and standing up for the values we share,” McCain, a frequent Republican critic of the president, said, according to remarks shared by his staff. “I also realize — and there is no point in avoiding a little straight talk here — that this doubt has much to do with some of the actions and statements of our President.”

McCain used the speech to emphasize the valuable nature of the relationship the United States has with its European allies — especially with Italy, which he noted plays a role “in protecting our common security.” He then said there is a “real debate” occurring in the U.S. about the role it must play in the world and with other countries.

“What I do believe, and I do not think I am exaggerating here, is that the future of the world will turn, to a large extent, on how this debate in America is resolved,” McCain said.

His remarks echoed a speech the Republican senator made in May in Australia, where he said Trump had “unsettled America’s friends” and Americans themselves. Earlier in his tenure in the White House, a Washington Post report revealed a tense phone call between Trump and Australian Prime Miniseer Malcolm Turnbull. As for the U.S.’s European allies, Trump has made a number of varying statements on the U.S.’s participation in NATO and pulled the country from the Paris Climate Accord.

Still, despite this rhetoric, McCain urged the country’s allegiance with its allies and spoke to what he says makes America strong. He recalled Heather Heyer, the 32-year-old woman who was killed while protesting a white supremacist and neo-Nazi rally in Charlottesville, Va., last month. He also pointed to the ongoing recovery efforts in Houston and southeast Texas, as tens of thousands of people grapple with one of the most damaging and costly natural disasters in U.S. history.

“This is America at its best — ordinary people, despite long odds, rising to master moments of extraordinary challenge, powered by their belief in that most simple and audacious of ideas — that all people are created equal,” McCain said. “Put simply: No one has ever gotten rich betting against America, my friends, and now is not a good time to start.”

McCain, the chairman of the Senate Armed Services Committee, was diagnosed with brain cancer in July. The Arizona senator plans to return to the Senate after its August recess this Tuesday. 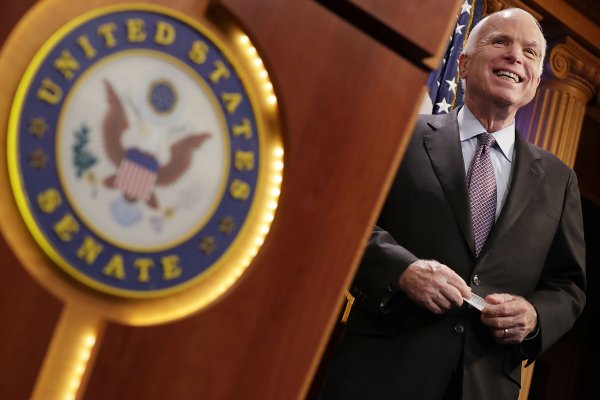 McCain to Return to D.C. Amid Cancer Treatment
Next Up: Editor's Pick