'Free Speech Week' Is Coming to Berkeley. Things Could Get Heated Again

Vice Media co-founder and conservative speaker Gavin McInnes reads a speech written by Ann Coulter to a crowd during a rally in Berkeley, California on April 27, 2017.
Josh Edelson—AFP/Getty Images
By Katy Steinmetz

The calm in Berkeley is unlikely to last for long. The city that is home to one of California’s most prestigious universities has been the site of four messy, violent clashes between the far-left and the far-right this year, the latest just before Labor Day. Now, the city is bracing for an upcoming “Free Speech Week” at the University of California, Berkeley campus in late September, which will bring back the provocateur whose appearance sparked the recent series of conflicts.

Firebrand Milo Yiannopoulos, along with conservative commentator Ann Coulter and more than a dozen other speakers, has been invited to campus by a student group called Berkeley Patriot to speak during a four-day event running Sept. 24-27. While a week focused on free speech might sound like a series the university itself would host, given that it is the proud home to the Free Speech Movement, the branding was done by Yiannopoulos — who vowed to return after protesters forced him to cancel a planned speech there in February.

The school will be providing venues for the event but does not play the role of approving or rejecting speakers invited by students, officials say. “This isn’t something we decided to permit,” says UC-Berkeley spokesperson Dan Mogulof. “There is no discretion.”

In advance of the event, Yiannopoulos has been channeling what has become a rallying cry for the right: that political correctness has gone too far in America, stifling a free exchange of ideas.“The greatest risk to the American republic is from the unprecedented assault on free speech,” he says in a video about the event. Critics on the left, in turn, have accused those on the right of using the words free speech as cover for spreading racism, sexism and hateful ideologies.

On the Berkeley campus, administrators and the students who have invited the speakers are busy trying to figure out how to keep things from going haywire this time. At least once per day, they’ve been on a conference call with the campus police to discuss strategies for keeping people safe and making sure the university doesn’t turn into a battleground. Mogulof says the school will be coordinating with other local and regional law enforcement in advance of “Free Speech Week” as well.

Though they will inevitably be criticized for it, the students who invited Yiannopoulos back to campus say their aim is not to stir up trouble. “We want this to be a peaceful event,” says Mike Wright, a senior at the school and leader of Berkeley Patriot, a freshly formed group that aims to serve as a conservative-leaning student news organization. “We’re principled people who are agonizing over how to do this right.” The publication, formerly known as the California Patriot, is in the process of re-launching and has about 15 student writers.

Wright says that, in a way, the event isn’t about Yiannopoulos at all. “It’s not about any of the speakers specifically. It’s the fact that they weren’t able to speak,” he explains.

The former Breitbart editor is anathema to many on the left, having called rape culture a “fantasy” and suggested that transgender people are mentally ill, for instance. In advance of his planned appearance in February, rumors swirled that he was going to out undocumented students on stage (Yiannopoulos denies this, saying he was never going to single out students, even though the event was supposed to campaign against “sanctuary campuses.”) “Free speech belongs to everyone, not just the spoilt brats of the academy,” he wrote on Facebook when he promised to return, vowing to dedicate each day to what he called “enemies” of free speech such as Black Lives Matter and Islam.

Given the rhetoric he is known for, it was little surprise that hundreds of non-violent protesters showed up to speak out against his presence in the liberal city earlier this year, but school officials were caught off guard when 100 or so black-clad protesters — known as antifa — marched into the fray, eventually breaking windows and setting fires before vandalizing nearby city streets. The event was cancelled out of safety concerns and the university issued a campus-wide “shelter in place” order. “Our society can’t have civil discourse, can’t have debate,” says Wright, “if we choose to silence ourselves because of the threat of fringe groups.”

Ann Coulter also canceled a speech this past spring after confusion — and a subsequent legal dispute — over when and where her speech was supposed to take place. Students from the Berkeley College Republicans, the group that invited her the first time, accused administrators of attempting to “restrict conservative speech” on campus. The university rejected that notion, saying that all the school’s actions have been aimed at keeping students safe.

In advance of Coulter’s planned appearance in April, people from outside the campus, on the right and the left, had been gearing up to protest, and the school spent about $600,000 on security. Mogulof says that the institution could “very easily” spend that amount or more on security for the “Free Speech Week” event, given that it takes place across multiple days. And there may be other costs. The anti-fascist protesters who came to “shut down” Yiannopoulos’ first event caused more than $100,000 worth of damage.

The administration says that the Berkeley Patriot group has been “scrupulous” in its adherence to policy and attempts to work with school officials. “We really do care about this university and we’re not inherently an adversarial organization,” Wright says. “We are just students who are trying to stand up for the principle of free speech.” The group and the school both say that anyone who is seeking a dustup is not welcome. “We will deter and confront those who would engage in violence,” says Mogulof, “and we don’t care from what side of the political spectrum they’re coming.”

Still, the latest blowup on Aug. 26 has people nervous. At a city park outside the campus, right-wing protesters were swarmed by another band of black-clad counterprotesters in a city park. Hundreds of non-violent protesters also showed up to rally against a conservative “anti-Marxism” gathering, but things got messy when the more militant leftists arrived. Police eventually arrested 13 people on various charges that day, including assault with a deadly weapon. Six people were injured, two sent to the hospital. And many worry that outsiders from both sides will be drawn to the university campus to protest — or support — the “Free Speech Week” events.

In the wake of that violence, the mayor of Berkeley, Jesse Arreguin, has called for the university to cancel “Free Speech Week.” But the students and the administration both say that, legally, that isn’t the way it works. Student groups are separate legal entities and “the university has neither the right or the ability to interfere with their choices of speakers based on the perspectives or beliefs of those speakers,” says Mogulof.

The school can act to safeguard people on campus and does have the right and responsibility to step in when there is a “clear and present danger” or “true threats,” he adds. But for now, “our focus is on preparation and planning that will allow these events to go forward safely and successfully.”

The school has, meanwhile, attempted to bring some order to the controversy over free speech, promising to spend the year hosting its own fireside chats about the issue and civil point-counterpoint discussions. As students returned for the beginning of the school year, Chancellor Carol Christ sent out a letter noting that a white nationalist rally in Charlottesville, where a young woman died after a man drove his vehicle into a crowd of counterprotesters, had made “the issue of free speech even more tense.” And she advised students to defend free speech, even it means hearing ideas they do not like.

“Call toxic speech out for what it is, don’t shout it down,” she wrote, “for in shouting it down, you collude in the narrative that universities are not open to all speech. Respond to hate speech with more speech.” 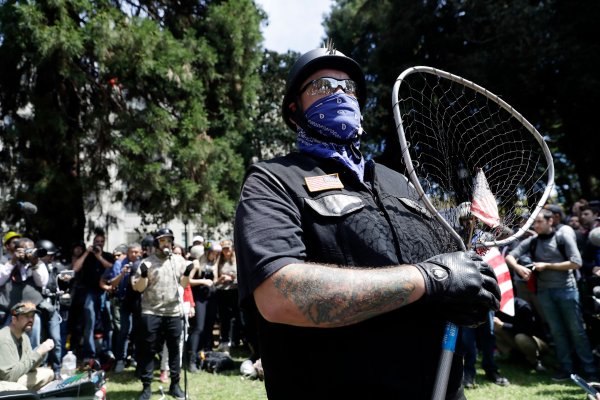