When Jim McIngvale woke up on Sunday morning, his home was filled with about two to three feet of floodwater. Once he was able to get out, the popular furniture store owner — better known as “Mattress Mack” — headed to work and saw the devastating damage and impact that Hurricane Harvey already had on Houston.

When he arrived at Gallery Furniture, one of his several stores in the city, he made a decision: He would open a couple of his locations as shelters for his fellow Houstonians. Since Sunday, 400 people have gathered at those locations, where they are welcome to sleep on the brand new sets of furniture that occupy the floors. Each store — designed to be flood-proof on elevated concrete — also has bathrooms, showers and an in-store restaurant.

For McIngvale, a well-known figure in the city who has a history of donating to charitable causes, opening his furniture stores as shelters was an easy decision.

“Being together in a space is helpful for all of us,” McIngvale told TIME. “People don’t feel like they’re on their own.”

Before so many displaced residents came to McIngvale’s stores, he posted the invitation on social media and offered to use his company’s moving trucks to rescue people trapped in their homes or stranded on highways. From about 2 p.m. on Sunday until 1 a.m., he said, 10 to 15 of his company’s moving trucks took to the flooded streets and helped rescue about 200 people.

“More than anything, for what looks like 100 miles is just water, water, water everywhere,” he said. “It’s really stressing to the community, but we’re all positive we’re going to come together.”

Maria Lopez plays with her son Rafael Lopez, 3, in the warehouse at Gallery Furniture where they have been staying after evacuating their flooded home over the weekend, in Houston, Texas, U.S., August 29, 2017.
Nick Oxford—REUTERS

During Hurricane Katrina in 2005, McIngvale opened two of his stores to 200 people who had fled New Orleans seeking shelter. Back then, those impacted by Katrina stayed for about two days. McIngvale does not know how long Houstonians inhabiting his stores now will stay there — but his furniture stores will be open as long as they need it. “We’re just trying to supplement where we can,” he said.

Some of those staying have even begun chipping in on administrative tasks to manage the shelter, like helping make food. And others have helped by donating items like baby formula. “It reaffirms your faith in mankind when you see people coming in and giving up what they don’t need,” McIngvale said. “There’s an incredible outpouring of support. It’s just tremendous.”

A Change.org petition was even created to laud McIngval. The petition asks Houston to create a day in his honor and grant him the key to the city. “This man is a Houston icon and deserves to be remembered forever,” the petition says. One of the fastest growing petitions on Change.org on Wednesday, the petition has quickly reached more than 42,000 supporters of the 50,000 needed.

Jakobe Thomas plays with his sister Journey Thomas, 1, in the warehouse at Gallery Furniture where they have been staying after evacuating their flooded home over the weekend, in Houston, Texas, U.S., August 29, 2017. REUTERS/Nick Oxford - RTX3DVUW
Nick Oxford—REUTERS

Outside of Harvey, McIngvale has played instrumental roles in causing helping people with obsessive compulsive disorders, making mental health care available to those in the city, funded a mobile stroke unit from St. Luke’s Episcopal Hospital and donated thousands of units of furniture to Houston area schools and homes in the community in need.

So far, 22 deaths have been reported as a result of the historic storm, according to the Associated Press, and that number is expected to grow,

“There is a lot of heartbreak, but the people have great spirits and are getting better,” McIngvale said.

Looking forward, McIngvale is particularly focused on the mental health of those impacted by the disaster and aiding the clean up and recovery efforts that are anticipated to take years: “The flooding is over and the hard part has just begun.” 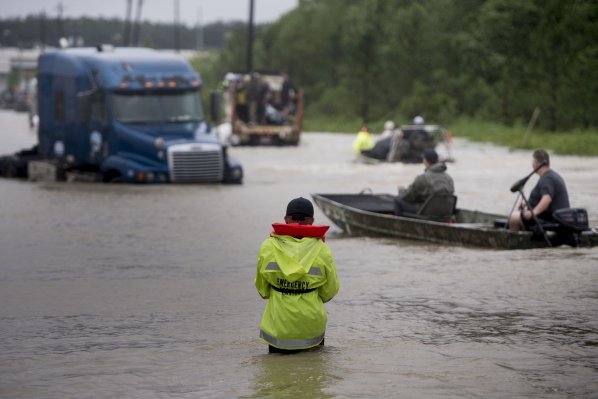