While Trevor Noah is probably best known for his satirical critiques of the Trump administration on The Daily Show, on Tuesday night he took a different approach: defending one of the White House’s most visible figures, Melania Trump.

The First Lady was the subject of plenty of Internet buzz after she was spotted sporting a pair of black stiletto heels while en route to see the damage caused by Hurricane Harvey in Texas. While the first lady changed into a pair of flat tennis shoes upon arrival in Texas, the Internet was already up in arms over what many felt was an “impractical” and “out of touch” fashion statement.

Noah pointed out that news had broken earlier of a nuclear missile that North Korea launched over Japan, but most of the chatter online focused on slamming the First Lady’s footwear choices.

“People weren’t talking about the nuclear missile that Kim Jong Un tested, because Melania Trump apparently did something much worse,” Noah said. “She went to Houston wearing high heels.”

Noah doubled down on his defense of Melania by pointing out that the focus should be on helping victims of Hurricane Harvey.

“Here’s the thing, I don’t know why anyone should care what anyone wears when they’re on their way to help people,” he said. “Who cares? Look at the pope, you see how he dresses? All white…he looks like he’s going to a P. Diddy party. But we don’t say, ‘Hey! He can’t go out helping people dressed like that.’”

Noah couldn’t resist making a subtle jab at the Trump administration, however, in his defense of the First Lady.

“You don’t wear stuff like that to a disaster zone, I understand that,” he said. “But in Melania’s defense, she lives in a permanent disaster zone, and that’s what she always wears.”

The Daily Show with Trevor Noah 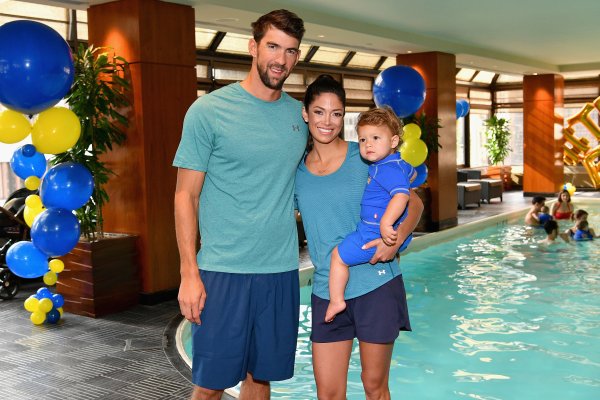 Michael Phelps Just Announced He's Going to Be a Dad Again
Next Up: Editor's Pick