Counterprotesters dominated the streets of San Francisco on Saturday morning after a right-wing “free speech” rally planned for Crissy Field was canceled.

Tensions swirled in advance of the weekend, as local officials feared the rally would attract white nationalists, potentially leading to violence with counterprotesters. Many critics said it was unsafe to hold such a politically charged event weeks after a deadly confrontation in Charlottesville, Virginia, where white nationalists and progressive activists clashed.

The group that organized the rally, Patriot Prayer, said on Friday that the event would be moved to Alamo Park in San Francisco because of concerns about safety at Crissy Field. But police had Alamo Park largely surrounded and fenced off on Saturday morning, with officers turning away counterprotesters who showed up with signs such as “F— Nazis.” Later in the day, Patriot Prayer’s founder Joey Gibson said that alternate gathering had also been canceled.

Thousands of counter-demonstrators meanwhile gathered at various locations around the city, many intending to march through San Francisco to a musical “Peace, Love and Understanding” event near City Hall. One of those locations was the Castro, the city’s historically LGBT district. Demonstrators, many of whom traveled to San Francisco from nearby cities, danced and waved signs with slogans like “Fascism Shall Not Pass” and “Will Trade Racists for Refugees.”

“We have the fascists on the run,” said California state Sen. Scott Wiener, standing among the throngs in the Castro. “We’ve sent a clear message to them that they have free speech, they can say what they want, but they can’t be violent. And these people showed their true colors” when they “abandoned” the event, he said.

Crissy Field is federal land, so the National Park Service was in charge of issuing the permit for the gathering. When that approval came through on Wednesday, there was a long list of banned items, ranging from helmets to pepper spray to selfie sticks. Wiener believes that it was various safety restrictions that led the group to call off the event less than 24 hours before it was supposed to start, because those would “make it impossible for them to hold an explosive rally.”

In the early afternoon, Gibson appeared alongside right-wing activist Kyle Chapman in a Facebook Live post to discuss the decision to cancel the rally. “I’m sorry to everybody who bought tickets, paid for gas,” Gibson said. “I just felt like it was going to be a huge riot.” He reiterated his belief that the cancellation was the fault of liberal detractors who characterized the event as a gathering of white supremacists, thereby attracting extremists.

Gibson has publicly disavowed white supremacy on several occasions, though individuals who hold those beliefs have been attracted to his events in the past. At a press conference in Pacifica on Saturday afternoon, he said his only plan was to personally show up at “random spots” in San Francisco to have dialogues with people who live here.

It was unclear if any of those who had planned to attend the event in Crissy Field would rally elsewhere during the weekend. A similar right-wing event planned for Sunday in Berkeley had also been canceled because of safety concerns.

The people taking to the streets of San Francisco appeared to be in a generally jubilant mood. At some counter-demonstrations, people were instructed to hug one another en masse. Protestors wore balloon-animal hats and blew giant bubbles. At Alamo Park, the location of the famed Victorian houses known as “Painted Ladies,” a giant banner had been draped across down from one of their roofs. It read “Love Trumps Hate.”

“We are all about love and inclusion and embracing everyone,” Wiener said, as a woman walked up to hug him in the Castro. “We’re going to celebrate and protest … and really show what this city is about.” 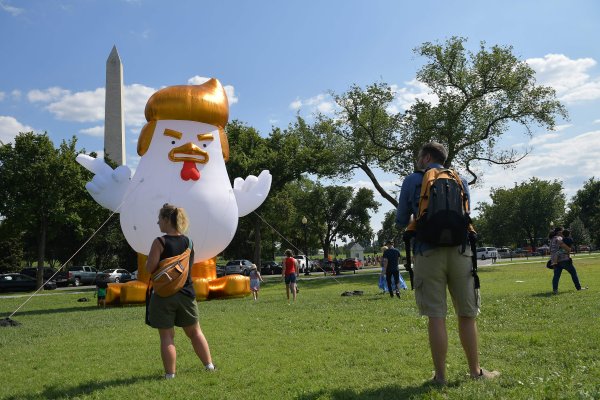 Meet the Man Behind the Giant Inflatable Chicken Mocking President Trump
Next Up: Editor's Pick