President Donald Trump on Friday formally ordered the Department of Defense to reverse a 2016 order allowing transgender individuals to serve openly in the military.

The formal policy document comes a month after Trump surprised the Pentagon when he announced in a series of July 26 tweets that he would reverse the Obama-era policy change. The Pentagon pondered how to respond, and Secretary of Defense James Mattis said he was waiting to hear from the White House exactly how he should proceed.

Friday’s iteration offered few clues for those individuals whose gender identity does not match their gender at birth. In fact, the scope of Trump’s decision on existing transgender service members was not immediately clear even with the formal guidance.

A White House official announced the signed directive on a call with reporters Friday evening. Under the new policy, the military will be indefinitely barred from accepting new transgender troops, and new trans-related medical treatments will be blocked.

“The memo that was signed today adopts a policy directing [the Department of Defense] and [Department of Homeland Security] to return to the longstanding policy and practice on military service by transgender individuals prior to June 2016,” said the official, who briefed reporters on the condition of anonymity.

The 2016 policy, issued by then-Secretary of Defense Ashton Carter, was to have allowed transgender people to serve openly starting earlier this year, though that timeline was later pushed to Jan 1, 2018, to allow for additional study of the issue. But now that study will no longer be needed.

Pentagon officials will have six months — until March 23, 2018 — to develop an “implementation plan” for how to address transgender troops already serving openly, the White House official said. But the new policy potentially includes a path for those troops to continue to serve, as it includes exceptions allowing the Secretary of Defense to take whatever steps deemed necessary to promote military readiness and unit cohesion, and to deal with costs.

The issue of transgender individuals in the military service animates conservatives greatly, although the impact is relatively small. A New England Journal of Medicine study from 2015 estimated that roughly 12,800 transgender individuals were serving in uniform, at a cost of $4.2 million to $5.6 million. A Pentagon-commissioned report from RAND put that number between 1,320 and 6,630 active-duty service members, costing between $2.4 million and $8.4 million. By comparison, military bands account for $437 million of the Pentagon’s budget, and some $84 million is spent treating erectile dysfunction.

Trump’s July tweets caught transgender service members and senior military leaders off guard, and led commanders to issue guidance to their troops that intolerance would not be allowed.

“After consultation with my Generals and military experts, please be advised that the United States Government will not accept or allow Transgender individuals to serve in any capacity in the U.S. Military,” Trump said on Twitter at the time. White House officials and the Pentagon said at the time that his missives did not amount to formal U.S. government policy.

The new policy will prohibit medical treatments for trans-related health issues, also with a six-month implementation period. It will include an exception for the health of those troops who have already begun treatments. Not all transgender individuals elect to undergo surgery as part of their transition.

As a candidate, Trump had promised to take care of LGBT Americans, and his tweets and subsequent guidance have drawn condemnation from those he pledged to protect. The White House official said Trump will still take care to protect all Americans from discrimination. 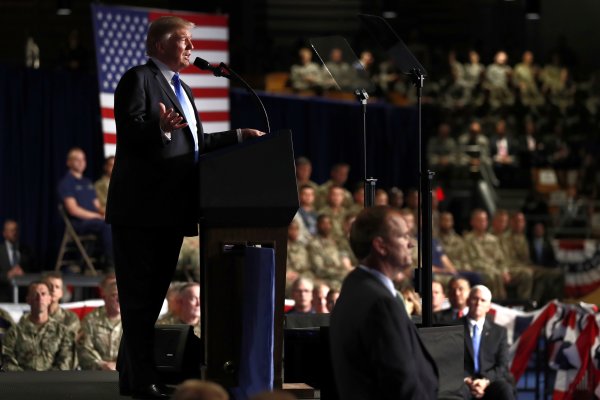 There Is No Military Path to Victory in Afghanistan
Next Up: Editor's Pick