President Trump loves breaking records, even when the evidence is dubious, but here’s one he probably doesn’t want to shatter: It is conceivable that he could become the least popular president in modern history.

That record is currently held by Richard Nixon, who resigned with a 24% approval rating. George W. Bush came perilously close to matching that record at 25% in early October of 2008. Trump is in shooting distance—having already reached record unpopularity for a president so early into his first term. He recently dipped to 34% approval, his lowest since taking office, and since then has rebounded just one point, to 35%.

To be sure, political approval can be a rollercoaster. Presidents tend to see a bump in approval during a 9/11-type crisis or the onset of a war. Major legislation, changes in White House personnel or a shift in tone from Trump himself could cause him to rebound. But generally speaking, the historical pattern is for presidents to slowly become less popular in the months after inauguration, and that has held true for Trump.

The question then is: How low could Trump go?

There is a whole cottage industry around parsing polls and a variety of ways to calculate this figure, from back-of-the-envelope math to complex statistical models. In consultation with David Rothschild, an economist at Microsoft Research who runs the site PredictWise, TIME decided to examine the historical lows in presidential approval ratings among respondents of different partisan leanings, back to the Nixon Administration, and apply those figures to the current political environment. (Full disclosure: I worked with Rothschild in 2012.)

This is a logical place to start when estimating Trump’s possible future ratings. In the current hyper-partisan environment, the strongest indicator of whether a person supports the President is his or her party affiliation.

This hasn’t always been the case. “Before Obama, presidential approval used to track closely with economic indicators,” says Rothschild. “More and more, people are answering questions based on their party identification.” Rothschild says the term is known among economists as “partisan cheerleading.”

This is unmistakably present in polls of Trump’s job performance. He is currently polling at 78% approval among self-identified Republicans, 30% among independents and 7% among Democrats. So to project Trump’s lowest possible rating, we had to figure out how low support for a Republican president has ever gotten among each of those three factions.

Fortunately, Gallup has regularly been asking party identification since they first started presidential polling, so we had a lot of data to work with. The lowest support a Republican president has ever had among his own party is 48%, in the final days of Nixon’s tenure. That’s not an anomaly: During his lowest moment, George W. Bush had only 55% support from Republicans.

The lowest figure for Democrats’ and independents’ approval of a Republican president — 3% and 19%, respectively — also come during Bush’s low point.

And while 48% support among all Republicans isn’t inconceivable, there’s a reason the theoretical low is not zero. Last week, a poll from Monmouth University found that many entrenched Trump supporters have no intention of ever leaving those trenches — just as a roughly equal proportion of his critics sees no possibility of changing their minds.

To estimate how low Trump can go, then, it is just a matter of applying the theoretical lows among Democrats, Republicans and independents to the current levels of party identification in the U.S., which remain fairly consistent. Currently, according to Gallup, 28% of Americans are Republicans, another 28% are Democrats, and 41% identify as independents.

Apply the historic lows to those populations and you come out with a theoretical low of 22% approval for Trump, which is a shade below where Nixon or George W. Bush ever reached. Below is a graph of how Trump has fared so far among the three groups and overall, plus dotted lines showing how far he’d have to have fall with each group to reach this figure.

Of course, one could argue that, having pulverized most other presidential norms, Trump is impervious to past historical trends. Just as he could bounce back, it’s possible he could sink even further among, say, independents than any previous modern president. But Rothschild disagrees.

“Things do change,” he says, “but history still serves as a good guide.” 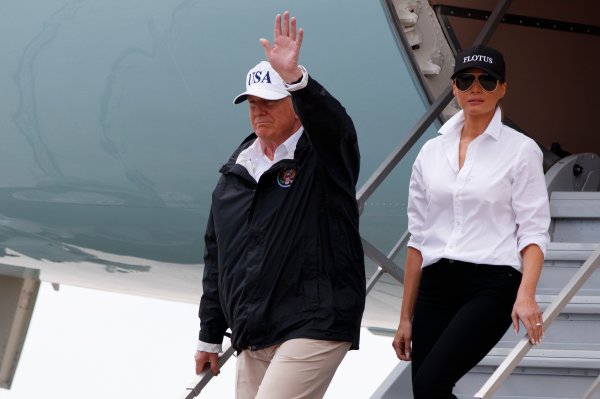 President Trump Hopes His Response to Hurricane Harvey Will Be a Model
Next Up: Editor's Pick