Journalists and human rights advocates have slammed the Cambodian government’s threats to close renowned local paper The Cambodia Daily and two U.S. funded independent radio stations as a barely veiled attempt to muzzle dissent in the run up to next year’s national elections.

On Monday, Cambodia threatened to shutter the English-language newspaper if it failed to pay a $6.3 million tax bill by Sept. 4, the Guardian reports. “If you don’t pay taxes, pack your bag and leave,” Prime Minister Hun Sen said referring to The Daily, which he also called a “thief.”

Deborah Krisher-Steele, The Daily‘s deputy publisher, said the $6.3 million bill had been arrived at arbitrarily and without subjecting the company to an audit. “This is clearly a tax bill that is not meant to be paid but whose purpose is to close down The Cambodia Daily,” she told a reporter at the paper.

On Twitter, Robin McDowell, a Pulitzer Prize-winning journalist and one of The Daily‘s founders described the targeting of the paper as a “heartbreaking smackdown on free press.” Human Rights Watch’s deputy Asia director Phil Robertson tweeted that Cambodia “should expect a grilling by other member states for serious rights violations.”

One of the world’s most notorious autocrats, former Khmer Rouge commander Hun Sen has ruled Cambodia for three decades. As the country’s 2018 general election draws closer, he appears to be further cracking down on criticism.

His government has accused U.S.-funded broadcasters Radio Free Asia and Voice of America of tax violations and of operating with improper licenses. Earlier this month he ordered a U.S. charity to leave the country after accusing it of exaggerating the scale of sex trafficking in the country during an interview aired on CNN. And on Wednesday, the U.S.-based nonprofit the National Democratic Institute was ordered to stop operations in Cambodia. Its staff have been given one week to leave the country for allegedly not following registration requirements.

The CEO of the Broadcasting Board of Governors John F. Lansing said in a statement Wednesday that the Cambodian government’s crackdown on key FM radio stations “is part of a pattern of intimidation and harassment of independent news sources that coincides with the run up to the 2018 elections.”

“At least one station has been intimidated into indefinitely ceasing broadcast of any RFA and VOA content, and another station has been completely shut down,” he continued. “We call on the Cambodian government to reverse this decision to muzzle objective sources of news and to allow all impacted stations to resume normal operations immediately.” 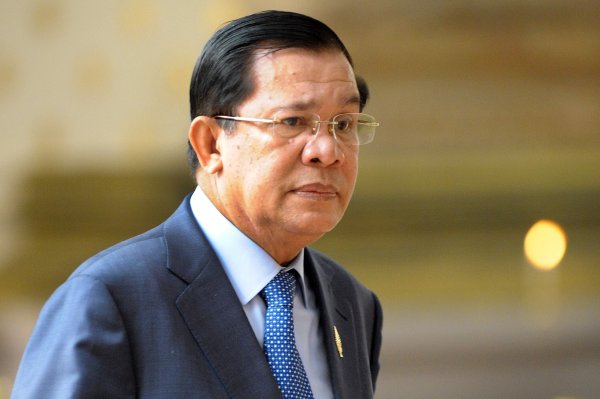