It’s summer travel season, and there’s nothing quite like the anticipation you feel when you board a plane and cross time zones en route to your vacation destination. But there’s also nothing quite as awful as that sleepy, hungover feeling you end up with when jet lag throws your body clock totally out of whack.

“When we travel across time zones, we expose our internal biological (or circadian) clock to a different light-dark cycle,” says Charmane Eastman, founding director the Biological Rhythms Research Lab at Rush University in Chicago. That causes a mismatch between the time zone you’re used to back home and the time zone where you’ve traveled to. Your sleep-wake cycle has been disrupted, and you feel tired, hangry, and not exactly in a vacay mood.

Your circadian clock will slowly reset itself so it eventually lines up with the location of your getaway. But this process can take a few days, and that’s a sizeable chunk of time when you should be out sightseeing or hanging in the sun and surf. Speed up the transition with one of these easy tactics.

Health.com: 7 Tips for the Best Sleep Ever

One of the most important environmental cues for resetting your sleep-wake cycle is light. To better sync your body clock to your new time zone, Eastman suggests intentionally exposing yourself to bright light. “We recommend using light boxes to slowly shift the circadian clock towards the destination time before the flight,” she says. You can buy a portable light box, but being outdoors in the sunshine is a powerful light source too.

Just remember that timing is crucial, and when you dose up on light depends on the direction in which you’re traveling. Exposing yourself to light at the wrong time “could shift your circadian clock in the wrong direction,” says Eastman.

For example, if you’re traveling eastward—say on an evening flight from New York to London—avoid light during your flight until around 11 a.m. London time after landing; you’ll feel more energized and alert throughout the day. You’ll also be more likely to fall asleep that night at an appropriate hour in your new time zone . . . then wake in the morning well-rested.

If you’re traveling west, like from Miami to Los Angeles, expose yourself to light post-flight by going outside under bright skies or using a light box later in the day, at dusk, and before bedtime. You’ll have an easier time staying up late while waking at an appropriate time for the PST time zone.

Lots of supplements sold on pharmacy shelves promise to help you catch up on sleep or crank your energy. But supplements containing melatonin—the synthetic version of the natural human hormone that helps control your sleep-wake cycle—are increasingly accepted by researchers as an effective way to realign your body clock and beat jet lag.

“Nothing else you can get over the counter is going to be as effective in getting you back on track than using melatonin,” Dr. Alon Avidan, director of the UCLA Sleep Disorders Center, tells Health. The key to making melatonin work for jet lag is to use it as a phase-shifter, not a sleep aid.

Health.com: 9 Things to Know Before Buying Another Supplement

That means taking a smaller dose. “A lower dose is going to shift your circadian rhythm, while a higher dose works more like a sleep medication or hypnotic,” Avidan points out. “With jet lag, you want to shift your clock above all else.”

If you’re traveling westward, Avidan suggests taking .5 milligrams late at night (maybe around midnight) for the first few days you’re at your destination. Those traveling eastward should take the same dosage earlier in the night, around 9 p.m. Be sure to check with your MD, however, to make sure melatonin doesn’t interfere with any other meds you are taking.

Good thing you’re probably not looking forward to airline food anyway. Recent research from Harvard Medical School suggests that not eating at all while you’re on your way to your destination could potentially help your body clock adjust to a new time zone.

This theory came about after researchers discovered that rats who had their usual food intake restricted experienced changes in their circadian rhythms. “If you only feed rats for four hours a day, in the middle of their normal sleep cycle, they quickly adjust to be awake before the food arrives,” Clifford Saper, study author and professor of neurology and neuroscience at Harvard Medical School wrote in an email to Health.

Health.com: The Healthiest Way to do Intermittent Fasting, According to a Nutritionist

Saper and his colleagues also discovered that the rats they put on fasts possessed an “accessory clock” that turned on when they were finally fed after not eating for 16 hours. That secondary clock was able to override their usual biological clock, and once it was set, it woke the animals up earlier.

Saper believes the idea could have implications for fighting jet lag. “If humans have similar circuitry, it should be possible to adjust to jet lag during a west-to-east flight by having a period of starvation, followed by refeeding at 7 a.m. or 8 a.m. in your new time zone.”

In other words, you would consume your last meal at noon on the day you hopped an eastward evening flight, skipping dinner en route, and then once you landed in the morning, had breakfast. Eating in the a.m. of your new time zone will reset your hunger clock, which resets your sleep clock as well, the theory goes.

Though this idea hasn’t been tested in humans yet, Saper says that he has received many emails from travelers who claim they either discovered this fasting solution themselves or tried it after reading his suggestion, and it worked for them. We’re not proponents of fasting in general, but if jet lag threatens your vacation fun, you might want to eat heartily on the morning before your flight, fast while you’re in the air, and then indulge in a healthy breakfast once you touch down. 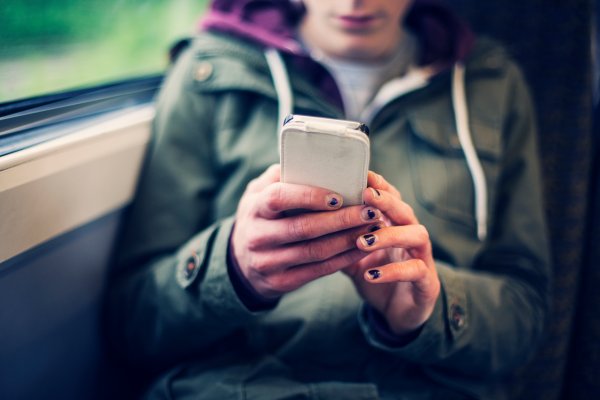 Here's How To Tell If You Have Smartphone Separation Anxiety
Next Up: Editor's Pick