The Rise and Fall of Steve Bannon: A Timeline

The former Breitbart News publisher has had a roller coaster ride in both the Trump campaign and the Administration, facing criticism from establishment Republicans and civil rights groups over his economic nationalism and ties to the alt-right.

Here’s a timeline of Bannon’s highs and lows with Trump.

July 12, 2015: Bannon calls Trump’s book, “Time to Get Tough,” a “blockbuster policy manifesto” in a review on Breitbart. Trump tweets a link to the story.

July 21: Trump tweets approvingly of a Breitbart story criticizing NBC News. “Thanks to Steve Bannon and real reporters,” he writes.

Nov. 2: Bannon interviews Trump for a Breitbart radio show. In the interview, Bannon says he is concerned that many CEOs in Silicon Valley are from Asia. “A country is more than an economy. We’re a civic society,” he says.

May 11: Bannon holds a private screening of “Clinton Cash,” a documentary he helped make aimed at persuading liberals that the Democratic presidential nominee has shady financial connections.

Aug. 25: The New York Post reports that Bannon was charged with domestic violence in 1996 but the charges were eventually dropped and Bannon pleaded not guilty. Democratic presidential nominee criticizes the Bannon pick in a speech on the alt-right.

Nov. 15: Senate Majority Leader Harry Reid criticizes Bannon in a speech on the Senate floor. “By placing a champion of white supremacists a step away from the Oval Office, what message does Trump send to the young girl who woke up Wednesday afraid to be a woman of color in America?” he asks.

Jan. 20, 2017: Trump is inaugurated as the 45th president. “The forgotten men and women of our country will be forgotten no longer,” he says in an inaugural address that Bannon reportedly helped write.

Jan. 27: Trump signs an executive order barring travel from seven Muslim-majority countries. Huge protests spring up at U.S. airports. Reporter Joshua Green later writes that Bannon arranged the timing on a Friday afternoon to spur the protests, which he thought would also galvanize Trump voters who supported the president’s move.

Jan. 28: Trump adds Bannon to the National Security Council’s principals committee, the top interagency group on national security. The move is considered unusual because political strategists have not served on the committee previously.

Feb. 13: Bannon makes the cover of TIME Magazine under he headline “The Great Manipulator.” Inside, the cover story asks “Is Steve Bannon the Second Most Powerful Man in the World?”

Photograph by Nadav Kander for TIME

Feb. 23: Bannon and White House Chief of Staff Reince Priebus give a joint interview at the Conservative Political Action Conference outside Washington, D.C., as part of a series of odd couple press appearances designed to smooth over tensions in the White House.

Feb. 28: Trump gives his first address to a joint session of Congress. Observers note that the speech reflects Bannon’s influence within the White House, but with a more moderate tone.

April 4: Bannon is removed from his role on the NSC’s Principals Committee, a move that reflects the increasing stature of McMaster.

April 11: In an interview with the New York Post, Trump downplays Bannon’s role with the campaign, arguing that he is his own chief strategist. “I like Steve, but you have to remember he was not involved in my campaign until very late,” he says.

April 12: In an interview with the Wall Street Journal, Trump refers to Bannon simply as “a guy who works for me.”

April 20: Bannon is named to the TIME 100, an annual list of the most influential people in the world.

May 2: Rabbi Shmuley Boteach posts a photo of himself and Bannon on Twitter which includes Bannon’s famous whiteboard which includes a list of every Trump campaign promise, with a checkmark next to those that have been kept.

June 1: Trump announces plans to withdraw the U.S. from the Paris climate agreement, a move that Bannon had internally lobbied for and that Trump’s daughter, Ivanka, and her husband, Jared Kushner, had opposed.

July 18: PenguinRandomHouse publishes “Devil’s Bargain” by Green, an inside look at Bannon and Trump during the campaign.

July 26: Reports surface that Bannon is calling for a top marginal tax rate of 44% on the wealthiest Americans, a break with other Republicans and even with Trump’s own proposed tax plan. The idea goes nowhere.

July 27: The Center for Public Integrity reveals that Bannon has a “shadow press office,” an outside public relations agent working for free, which ethics experts say is unprecedented and possibly illegal.

Aug. 15: Asked about Bannon’s future in the White House at a press conference, Trump says “we’ll see what happens with Mr. Bannon,” adding that he is a “good man” and “not a racist” but again noting that he came on to the campaign late.

Aug. 16: In an interview with the progressive American Prospect magazine, Bannon calls white supremacists “a collection of clowns,” argues that an “economic war with China” has already begun and says there is no military solution to the North Korea problem. Bannon allies later say he did not intend for the interview to be on the record.

Aug. 18: The Drudge Report and the New York Times break the news that Trump has decided to have Bannon leave the White House. 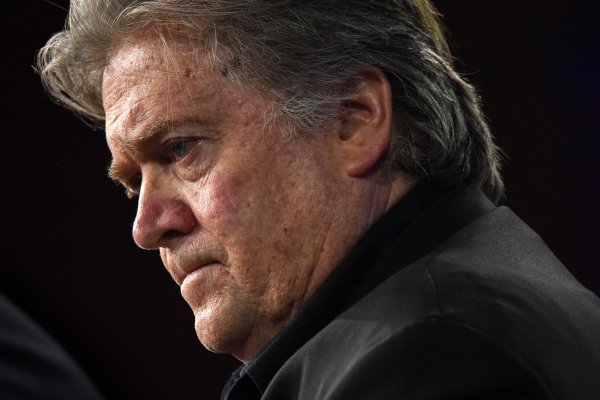 Bannon Out
Next Up: Editor's Pick