Binge Watchers Have a 98% Greater Risk of Sleep Problems

If you’ve ever pushed back your bedtime to watch “just one more” episode of Orange Is the New Black, or lay in bed wide-eyed after streaming three exhilarating hours of Game of Thrones, this new research probably won’t surprise you. A new study in the Journal of Clinical Sleep Medicine is the first to link binge-watching with poorer sleep quality, more fatigue and increased insomnia.

Not only does on-demand TV tempt us to keep watching episode after episode, say the study’s authors, but the shows are also designed to draw us in, boost suspense and emotionally invest in plot lines and characters. This can lead to excitement and increased arousal, the research shows, which can translate into increased cognitive alertness and an inability to get the shuteye you need.

RELATED: 7 Tips for the Best Sleep Ever

The study involved 423 young adults, ages 18 to 25, who completed online surveys about how often they watched television, both conventional TV and streaming services. They were also asked how frequently they “binge-watched” shows, defined as watching multiple consecutive episodes of the same show in one sitting, on any type of screen. They also answered questions about their sleep quality and how tired or alert they felt throughout the day.

More than 80% of the participants identified themselves as binge watchers, with 20% of that group binge-watching at least a few times a week in the previous month. A little more than half of binge-watchers said they tended to view three to four episodes in one sitting, and the average binge session was just over three hours. (Men binged less frequently than women, but their viewing sessions were nearly twice as long on average.)

As the study authors suspected, the participants who identified as binge-watchers reported more fatigue, more symptoms of insomnia and greater alertness prior to going to sleep. And compared to non-bingers, they had a 98% increased risk of having poor sleep quality.

Interestingly, no relationship was found between sleep problems and regular television watching, during which viewers typically switch from one program to another.

RELATED: Sleep on This: Our Top Pillow Picks

Co-author Jan Van den Bulck, professor of communication studies at the University of Michigan, says his study does not prove that binge-watching directly affects sleep quality, but it provides good evidence that the two are linked. There are several ways in which streaming shows might keep us from scoring slumber, he adds.

First, it’s known that blue light before bed is not good for sleep patterns, Van den Bulck says—although he points out that television viewing in general is usually not one of the biggest offenders of sleep disturbance in other research. “Whether regular television viewing has much effect on sleep is debated,” the authors wrote in their study.

But binge-watching has its own set of potentially sleep-wrecking qualities. “When you watch a show on regular TV and it’s over, you have to wait until next week to see the next episode,” Van den Bulck says. “Just like when you go to the gym, you stop working out when your body has had enough; the dumbbells aren’t egging you on to do more.”

RELATED: Best Travel Pillows for Every Type of Sleeper

Streaming services, however, tease us to play episode after episode, often only giving us a few seconds to decide whether we should keep going. “The episode ends, a character may or may not have died, and we’re hooked,” he says. In this way, streaming television is a lot like social media—where we often go to check on one status or photo, and end up losing an hour.

On top of that, Van den Bulck says, falling asleep after watching something we’re deeply invested in may require a longer wind-down period. “It’s a different kind of immersion—the idea that you almost feel as if you’re in that world of science fiction or fantasy or action,” he says. “And it’s more intense if you have more hours of exposure.”

Van den Bulck says that if people want to improve the amount or the quality of sleep they’re getting, evaluating their binge-watching habits might be a good place to start. Try putting limits on when and how much streaming television you watch, he suggests, or you could incorporate relaxation or mindfulness techniques before bed.

But binge-watching isn’t all bad, he adds, despite its negative-sounding name. “I have students who say they’ve been studying hard for their exams, and as a reward they’re going to catch up on their favorite show,” he says. “That’s very rational behavior and there’s nothing wrong with that.”

RELATED: 10 Products That May Help You Sleep

Likewise, if you don’t have trouble falling asleep or feeling awake during the day, he says, you’re probably fine to continue on with your regularly scheduled viewing habits. (Still, it’s worth noting that binge-watching can be hazardous to your health in other ways, as well.)

While this study was done on young adults, Van den Bulck believes that people of all age groups can have similar problems with binge-watching and sleep, although he guesses that a smaller percentage of older adults are binge-watching as frequently as teens and 20-somethings are.

And while he knows his research isn’t particularly earth-shattering, he says it’s important to document the effects of different types of media in an ever-shifting landscape. “I often joke that my research on media is always historical,” he says, “because by the time I finish and get it published, something has changed and we have to start all over.” 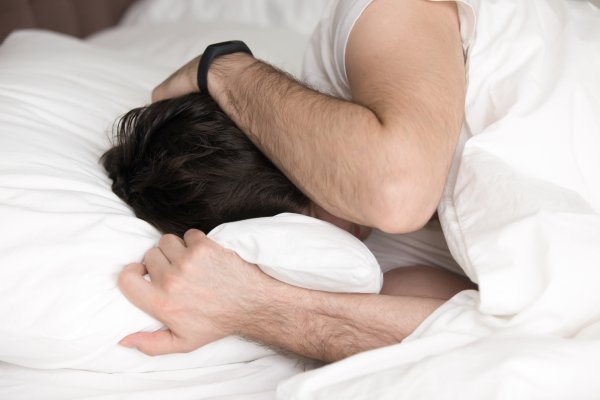 What It's Like to Have Exploding Head Syndrome
Next Up: Editor's Pick