From Charlottesville to North Korea to Steve Bannon, Everything That Happened on Trump's 'Working Vacation'

President Donald Trump took what the White House billed as a “working vacation” at his New Jersey golf club and his New York City Trump Tower penthouse for two weeks this month. But it could hardly have been a relaxing trip for the President of the United States.

“This is not a vacation,” Trump wrote on Twitter at the outset. “Meetings and calls!”

And he certainly kept busy. During Trump’s time away from the White House — he returns Sunday — he sparred with a U.S. Senator, escalated tensions with North Korea, incited controversy with his response to violent clashes in Charlottesville, Va., and saw a parade of CEOs abandon him. And he topped it all off by cutting loose his controversial chief strategist Steve Bannon on Friday.

Here’s a look at everything that happened during the President’s eventful days away from the nation’s capital.

President Donald Trump waves as he walks down the steps of Air Force One with his grandchildren after arriving at Morristown Municipal Airport to begin his summer vacation at his Bedminster golf club in Morristown, N.J. on Aug. 4, 2017.
Evan Vucci—AP

Aug. 5-6: Trump tweets that his 17-day vacation is, in fact, no vacation at all — although photos emerge of him on the golf course.

Aug. 7: Trump spends the first Monday morning of his vacation catching up on cable news, or so it seems. After Connecticut Democratic Sen. Richard Blumenthal appears on CNN and makes critical comments about Trump, the President unleashes a flurry of tweets attacking Blumenthal.

The President also claims his political base is “bigger and stronger than ever” in a series of tweets, despite poll numbers showing that support among his base is actually down slightly.

Aug. 8: Trump hosts a meeting at his Bedminster Golf Club on the opioid crisis, which he calls an “emergency,” though he doesn’t declare an official state of emergency to address it. In response to questions about North Korea’s growing nuclear capabilities, the President threatens the North Korean regime with “fire and fury like the world has never seen.”

Trump speaks during a security briefing on Aug. 10, 2017, at his Bedminster National Golf Club in New Jersey.
Nicholas Kamm—AFP/Getty Images

Aug. 10: Trump meets with his national security team at his Bedminster club and makes additional remarks. In response to threats North Korea made against the U.S. territory Guam, the President says: “Let’s see what he does with Guam. He does something in Guam, it will be an event the likes of which nobody’s seen before, what will happen in North Korea.” Trump also says he wants to “de-nuke” the world.

Aug. 11: After meeting with United Nations Ambassador Nikki Haley and Secretary of State Rex Tillerson at Bedminster, the President holds another news conference. In those remarks, which aides later say were unplanned, the Trump says he would not rule out a military option in Venezuela amid chaos in the South American country.

Aug. 12: As violence builds around a march of white nationalists in Charlottesville, Va., Trump is largely quiet. First Lady Melania Trump is the first to issue a statement on the events, tweeting that “our country encourages freedom of speech, but let’s communicate w/o hate in our hearts. No good comes from violence.” Trump later tweets about condemning hate, coming together, and says, “Charlottesville-sad!” But in his first public remarks on the events, Trump does not specifically call out white supremacists and neo-Nazis by name, leading to intense backlash.

Aug. 13: The White House releases a statement, attributed only to an unnamed spokesperson, saying that Trump was referring to neo-Nazis in his remarks the day before, as more and more lawmakers come out against his equivocal response.

Trump pauses while speaking in the Diplomatic Reception Room of the White House in Washington on Aug. 14, 2017.
Evan Vucci—AP

During a brief trip back to Washington, Trump delivers a statement in which he explicitly denounces white supremacy, to the relief of aides. Later, after he refuses to answer a reporter’s follow up question about his initial remarks, he tweets that the “fake news media” will never be satisfied.

Aug. 15: Back in New York, the President gathers reporters in the lobby of Trump Tower for what was supposed to be a statement on infrastructure. But when Trump opens the floor for questions the focus shifts to Charlottesville, he doubles down on the comments he made Saturday, placing blame on the so-called “alt-left” for the weekend violence. He adds that efforts to remove Confederate monuments are aimed at changing history and the collective “culture” of the U.S.

Aug. 16: More CEOs announce they’re stepping down from the Manufacturing Council, a black Trump surrogate weeps and says he can no longer support the President in a Fox News segment, and Trump announces he’s shutting a pair of business advisory panels down before the executives on them have a chance to release their own statement.

Aug. 17: As Republicans continue to speak out against Trump, the President blasts them on Twitter in a series of morning tweets. Later, in response to an apparent terrorist attack in Barcelona, the President posts a tweet about a General Pershing, a man he falsely claimed during his campaign executed Muslims with bullets dipped in pig’s blood.

Aug. 18: Trump boasts that “our borders are far tougher than ever before” following the attack in Barcelona, and blames Democrats and the courts for making it harder to protect the homeland.

He caps a news-filled week when it emerges that Bannon is out of a job at the White House. 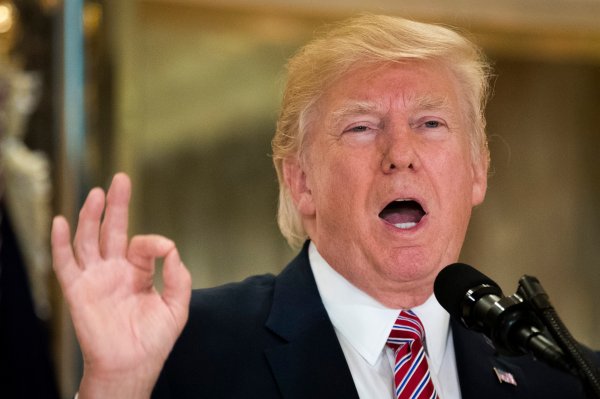 Trump Decries Removal of Confederate Statues
Next Up: Editor's Pick