James Corden and Samuel L. Jackson stepped in to the rap battle arena to keep audiences entertained while we wait for the next Eminem album (or Eminem’s movie about rap battles). On Monday night’s episode of The Late Late Show, the two stars rained down insults and cash in a memorable edition of Corden’s sketch, “Drop the Mic.”

As Corden’s guest, Jackson played nice at first while Corden spit out a few bars, but when it came to game time, Jackson did not hold back: “I feel bad for you son, ’cause I’m the real star/ No one knows who you are without Adele in a car/ It’s amazing you’re anonymous and over-exposed and you look like a Minion in too-tight clothes.” While it was Corden’s audience, they couldn’t help but howl in delight at the lines.

Corden took the diss in stride, and hit back with his own: “Nice verse Sam but now you get torn apart/ Like I’m a velociraptor and this is Jurassic Park/ You’ve got fame from Pulp Fiction and other big hits/ But 90 percent of your IMDB page is s–t.”

It was a good effort, but as as Omar said in The Wire, when you come for the king, you best not miss, and Corden’s verses just stoked Jackson’s fire. He tweaked a line from Snakes on a Plane and earned himself a true mic drop. 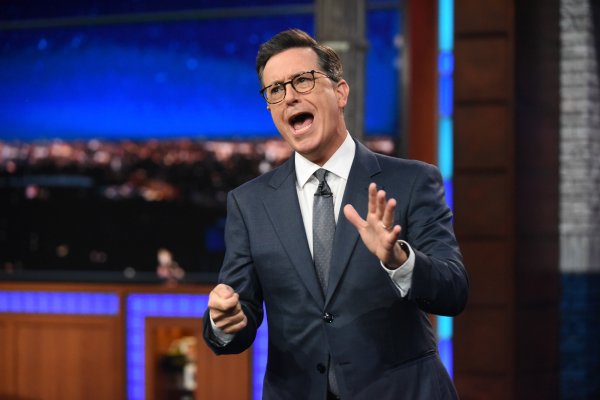 Here's How Late Night Hosts Reacted to Charlottesville
Next Up: Editor's Pick