By Andrew Katz
An officer patrols in front of a recent KKK rally in Charlottesville, Va.
Jill Mumie

The officer stands calmly as a group of white supremacists act out behind him. One man’s outstretched right arm signals a Nazi salute. Another wears a red hood. A third rests a Confederate flag on his shoulder.

The provocative scene that Saturday afternoon in Charlottesville, captured with an iPhone, was shared with a modest public following but would attract a wide audience. “Confederate flags, Nazi salutes, and Klansmen having their rights protected by a black police officer,” reads a tweet posted on Aug. 12 by Ubadah Sabbagh, a Ph.D. student at Virginia Tech. “This picture hurts.” James P. O’Neill, commissioner of the New York City Police Department, shared the image and commended law enforcement in Charlottesville “for handling today’s events with true professionalism. Much respect.” Tim Hogan, a former member of the Hillary for America communications team, tweeted it, too: “A picture worth a thousand words.” A writer, Yashar Ali, suggested the image be nominated for a Pulitzer Prize. “A black police officer protecting a group of men who wish him harm,” he wrote in a tweet. “Incredible.” He prefaced that remark with a question common during breaking news: “Who took this photo?”

And when was it taken? The picture went viral on Aug. 12, as the Virginia college town was rocked by unrest over the planned “Unite the Right” rally. Tensions that morning had devolved into street clashes, as dozens of white nationalists, neo-Nazis and Klansmen faced off against a fierce contingent of counterprotesters over plans to remove a statue of Confederate Gen. Robert E. Lee from a city park. As intense pictures from the violence made the rounds, this image stood alone. A distraction in what otherwise felt like a moment of chaos.

The image spread further after a speeding car smashed into counterdemonstrators—sending bodies flying, killing one woman and injuring 19 others. But as the retweets entered into the tens of thousands, doubts emerged that this image was from Saturday’s events. In the uncomfortable haze of live breaking news it became the latest in a long line of images to be grabbed and shared online without credit or context. Social networks are minefields for information-gatherers. Photographers lose control of their work while those who share it reap the rewards: retweets, likes, followers. Images are separated from their intended meaning, and can even take on a new one.

And so began a hunt for the photographer.

A reverse image search on Google pointed to Reddit, where a thread with the photo was submitted on July 15 under the headline: “Police Officer Nash protects the KKK’s first amendment rights as they protest the removal of two statues commemorating Confederate generals in Charlottesville, VA last weekend.” The entry supported suspicions the image was not from Aug. 12. Among the comments was a link to another thread, submitted four days prior, titled, “This picture was taken at the KKK rally July 8th in Charlottesville, Virginia.” Helpful, but it raised more questions than answers.

The search moved to Facebook, where Frank Somerville, an anchor with KTVU in Oakland, Calif., shared a post on July 13 by Kimberly Payne Hawk that included the picture. She had first seen the image on the Facebook page of a friend. Would she happen to know the photographer?

Reached by Facebook message, she offered a name of a local resident. A few scrolls through the Instagram feed of an account associated with the name and there the picture was, between another protest image and a photograph celebrating a soft drink.

Jill Mumie lives about a block away from Justice Park. On July 8, a scorcher of a Saturday, she ventured out to support the counterprotesters. “I knew I wanted to go and be a part of that,” she tells TIME. “I went by myself and just wanted to be part of the energy.”

Mumie, 42, had recently moved to Charlottesville from New Jersey, where she worked for five years in Philadelphia’s hospitality industry. In college she had studied art and photography and worked as a Canon EOS Tech Support representative. She was only in town for about a week and a half before the rally.

That afternoon, she positioned herself near an area that had been cordoned off “in anticipation of what might unfold.” She purposefully stayed in front of the officer, waiting for what she felt was the right moment that captured the “bizarre” scene that was unfolding.

Once the Loyal White Knights of the Ku Klux Klan arrived, she recalled “a huge surge of people behind me.” And so with her iPhone, Mumie tried a few different shots. In one outtake, a girl stands beside the officer, snapping a picture of the commotion as the officer stares elsewhere. The angle of his chin, the tilt of his head, something felt off. In another outtake, the attention is focused on a man behind the officer who displays a middle finger in Mumie’s direction.

Without much water on such a hot day, Mumie left the area soon after. At one point, the gathering of about 50 Klansmen would be deemed unlawful and authorities would forcefully break up the crowd that was angered, in part, by officers’ escort of the Klansmen back to their vehicles. Hours later, a local outlet, The Daily Progress, reported that police had arrested 23 people in connection with the protest.

Mumie later posted an image from the scene to her Instagram account (@lil_mooms)—what she calls her “sketchbook.” With a few hundred followers, it began in an eddy, but was pulled into the mainstream. This past weekend, friends alerted her that it was being shared widely. “You have this person being professional and protecting the free speech of Americans and then you have this hate speech behind him,” she says. “I remember looking at it after the fact and thought it really does sum it up.”

For Mumie, the picture is about the show of restraint and resilience. She uses words like “duty” and “honor” and invokes former First Lady Michelle Obama’s message during last year’s Democratic National Convention: “When they go low, we go high.”

Days before the Aug. 12 rally, Mumie dropped off a copy of the photograph, along with her contact information, at the local police department.

Was the officer aware of the icon he’d become?

A school resource officer at Charlottesville High School, Darius Nash, confirmed to TIME on Aug. 14 that it was he in the photograph.

“I don’t feel like I’m a hero for it,” Nash wrote in an email statement that morning. “I swore to protect my city and that’s what I was there to do. I don’t think it makes me a hero, just doing what I believe in.”

Later in the afternoon, Nash said he appreciated the show of support for law enforcement and said the experience “humbled me a whole lot, just seeing how a picture like that can reveal so much.” At one point, highlighting how much the community has been affected by the violence, Nash said a friend of his wife knew the victim of the car-ramming, Heather Heyer. “So we all felt it.” 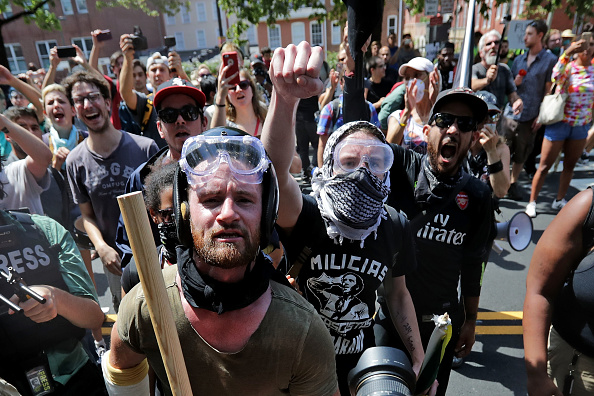 Anti-Fascist Protesters Draw Attention After Charlottesville
Next Up: Editor's Pick