Don’t count Littlefinger out yet. The conniving lord is sowing discord in Winterfell. On Sunday night’s episode of Game of Thrones he led Arya Stark straight to a note that her sister Sansa wrote under duress in hopes of saving her father way back in season one. However, without context, the letter will almost certainly create a rift between the Stark sisters.

In episode three of season seven, we learned that Maester Luwin apparently keeps a record of every single scroll ever flown via raven express to King’s Landing. Littlefinger raised an eyebrow upon hearing this information. What scroll could he be after?

It looks like it’s a letter Sansa wrote under duress way back in season one. When Ned Stark was arrested, Cersei Lannister debated whether she should throw the Stark daughter in jail — or worse. It was Littlefinger who suggested that Sansa “should be given a chance to prove her loyalty.” Cersei agrees and implies to Sansa that if she writes her brother Robb, telling him and his army to stand down, her father may be spared. Sansa agrees to write the letter.

In this week’s episode, Littlefinger led Arya right to that letter. The youngest Stark sister, who had correctly assumed that Littlefinger is the one whispering dreams of ruling the North and getting rid of Jon in Sansa’s ear, decides to follow Lord Baelish. She sees him receive a note from a servant recovered from the maester’s archives. She then breaks into his room and finds the letter hidden in a hole in the bed. It reads as follows:

Littlefinger, lurking in the shadows, watches Arya take the note. He wanted her to find it all along. Earlier in the episode, the face-changing girl had already confronted her older sister about her lack of loyalty to Jon. Now, Arya might believe that Sansa has been plotting against the rest of the Starks all along. If the sisters feud, Sansa will most likely turn to Littlefinger for counsel.

MORE: 12 Questions Game of Thrones Needs to Answer in the Second Half of Season 7

Or perhaps Arya wasn’t fooled. Though Littlefinger is certainly trickier than, say, the traveling actors who Arya has spied on before, Arya has tricks up her sleeve too. She flexed her fighting prowess in the yard with Brienne, but Arya has not yet revealed to anyone in Winterfell that she can change faces. If she really wanted to spy on someone without being seen, she would do so as a different person.

Plus, Maester Luwin and Robb were able to determine themselves back in season one that Sansa was tricked into writing the note. “It’s your sister’s hand, but the queen’s words,” Luwin told Robb. There’s a chance that Arya either figured out that this note was a plant or will in the future.

And let’s not forget, Arya is carrying around Chekhov’s dagger. Bran can “see everything” now, and he wouldn’t hand the Valyrian steel dagger that Littlefinger gifted him over to Arya without knowing exactly how she would use it.

Plus, maybe the two sisters know better. As we hear Sansa intone in the season seven trailer (and not yet in this season of the show), the lone wolf dies, but the pack survives. The Starks need to stick together. Chances are that Littlefinger will still end up staring down the pointy end. 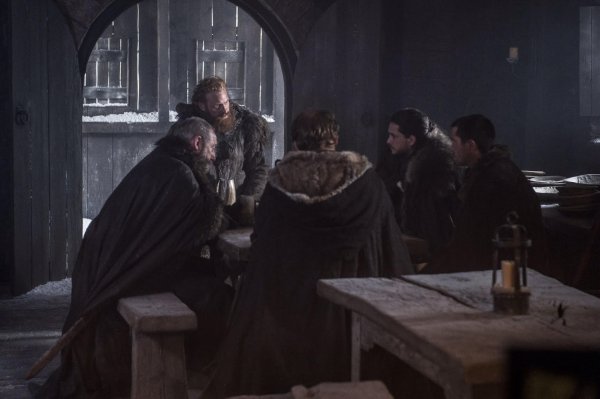 This Long-Lost Character Just Came Back in a Big Way on Game of Thrones
Next Up: Editor's Pick