What White America Must Do Next

Ideas
A Unite the Right protester drapes himself in a Confederate flag during a KKK rally in Charlottesville, Va., on July 8, 2017.
Gabriella Demczuk

Saturday, August 12th, will go down as a dark day for America. A coalition of white nationalists attempted to rally in Charlottesville, Virginia. Young and old donned swastikas. White militia in full camouflage and many openly carrying weapons set out to “protect” the demonstrators. Angry men and women screamed vile and racist slogans. Violence broke out with counter-protesters. Then James Alex Fields, Jr., a 20-year-old from Ohio, decided to plow his car into a peaceful crowd protesting the racist spectacle. Heather Heyer of Charlottesville was killed and at least 19 people were injured. Cornel West, who joined the counter protests with a group of clergy, witnessed it all and told me, “I have never seen this kind of hatred.”

If these were normal times, even if you believed a press conference to be typical American racial theater, you would expect the President of the United States to condemn unequivocally the hatred and bigotry of the white nationalists gathered in Charlottesville. But these aren’t normal times.

Instead, Donald Trump offered a mealy-mouthed response. “We condemn in the strongest possible terms this egregious display of hatred, bigotry and violence on many sides, on many sides.”

Trump did not mention white supremacy or single out white nationalists. He only offered a general condemnation based on a false equivalence: that somehow what we witnessed in Charlottesville was the same as protests at the University of California, Berkeley, or in Ferguson, or in Baltimore. As if what came out of the mouths of these “white thugs” is equivalent to the principles espoused by those who dared to stand up to them.

It is an old move, really. A rhetorical sleight of hand meant to trap the critic in a corner and to hide the speaker’s true intent. Black people have seen it since the first moment we called attention to this country’s hypocrisy. In this case, Trump did not want to condemn the white nationalists in Charlottesville because they are on his side.

These people, as David Duke reminded the president, helped elect him. Steve Bannon, Stephen Miller, Sebastian Gorka and Jefferson Beauregard Sessions III represent these people. And, if The Daily Stormer, a white nationalist publication, is any indication, these people are quite satisfied with what Trump said. “He said he loves us all…. No condemnation at all. Really, really good. God bless him.”

Of course, many politicians and pundits (myself included) were quick to condemn Trump. Former Vice President Joe Biden tweeted “There is only one side. #charlottesville.” Joe Scarborough tweeted “Mr. President, call it by its name! ‘WHITE SUPREMACIST TERRORISM.” Senator Jeff Flake of Arizona tweeted, “The #WhiteSupremacy in #Charlottesville does not reflect the values of the America I know. Hate and bigotry have no place in this country.” Ivanka Trump’s eventual Tweets sounded similar. But these condemnations all seem a little too easy to me. No matter their intentions, they smack of a certain kind of sentimentality. As James Baldwin noted, sentimentality is “the mark of dishonesty;…the mask of cruelty.”

It is easy to condemn Trump and the white nationalists who participated in the rally—to say that they are the bad people. But we give them life. What about the racially coded language that exploits white fears and has defined our political discourse for generations? These rabid racists shout their Nazi slogans, defend Confederate monuments, and declare that America is a white nation—while politicians on both sides of the aisle trade in the myth that Trump’s election was a backlash of the white working class, as if what is happening to white workers is somehow distinct from and more important than what is happening to workers of color. As if we are the reasons life has gotten so much harder for white working people in this country.

The irony, of course, is that this so-called Rust Belt rebellion isn’t true. A higher percentage of Trump’s voters in comparison to Clinton voters were from houses that earned over $100,000 a year. Moreover, several studies have shown that social issues, not economic issues, motivated the Trump voter. Trump voters worried that a particular cultural vision of America was eroding. Politicians’ appeals to “the white working class revolt” among Democrats and Republicans is less about the economic devastation of workers and more about white identity—with black and brown folk and immigrants as the scapegoats.

These white nationalists say they want to take back their country as members of Congress push draconian immigration policies that will ensure this nation remains a white nation. It is easy to condemn the violence of these white supremacists as politicians debate the logistics of a return to a regime of policing that has devastated black and brown communities, or challenge Affirmative Action because supposedly black and brown students are taking the slots of white students, or seek to disenfranchise millions of our fellow citizens under the guise of voter fraud. They all seem to be on Trump’s side.

Such views give oxygen to white supremacy’s blazing fire. And such views have animated American politics as long as I can remember. Trump’s election has inflamed and emboldened those who embrace them. Now, we have to confront honestly this fact: the white nationalists in Charlottesville, and every other town, are as native to American soil as sagebrush and buffalo grass. What is required of white America now is something much more than a sentimental condemnation of that fact. Ask yourselves: Can you truly give up the idea that this is a white nation? Can you imagine this country as a truly multiracial democracy? Or, are you willing to cast this fragile experiment into the trash bin of history, because you refuse to have it any other way? 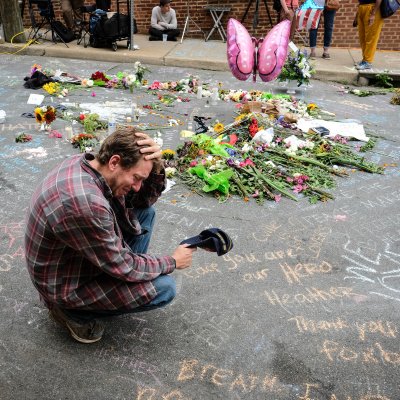 From Selma to Charlottesville, the Ghosts of Our Past
Next Up: Editor's Pick