Mother of Suspect Who Allegedly Plowed Into Charlottesville Protesters Speaks Out

As officials try to make sense of the violent clashes at a white supremacist rally in Charlottesville, Va., the mother of the man who allegedly plowed his car through a crowd of counter-protesters is also trying to understand her son’s actions.

In an interview late Saturday, Samantha Bloom told the Associated Press that she knew her son, James Alex Fields Jr., was attending a rally in Virginia, but didn’t know it was connected to white nationalists.

“I thought it had something to do with Trump. Trump’s not a white supremacist,” she said.

“He had an African-American friend so,” she added, trailing off.

Bloom said that she told her son to stay safe before he left Saturday.

“I told him to be careful,” Bloom told the Toledo Blade. “[And] if they’re going to rally to make sure he’s doing it peacefully.”

Fields Jr., 20, was arrested Saturday and currently faces numerous charges including second-degree murder after he allegedly barreled a car through a group of counter-protesters Saturday afternoon, killing one woman and injuring 19 others. 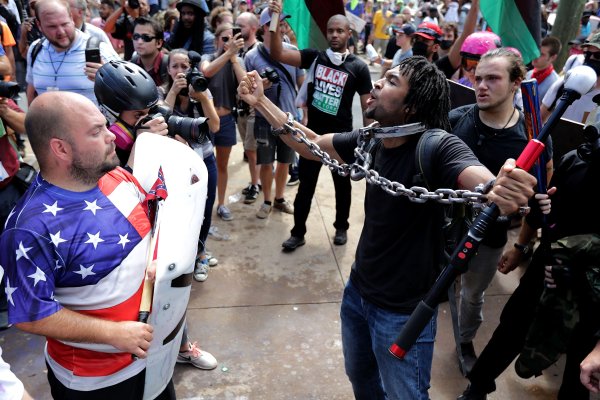 Politicians on Both Sides of the Aisle Condemn Charlottesville Violence
Next Up: Editor's Pick