Pink Makes a Comeback with Empowering Ballad 'What About Us'

Pink made her debut in the heyday of early 2000s pop, right alongside stars Britney Spears and Christina Aguilera. (Remember “Get the Party Started” and “Just Like a Pill”?) Her punk aesthetic, powerhouse vocals, and party-ready performance attitude gained her a legion of global fans, and a slew of verified hits launched her into certain stardom with several top-10 hits in the last two decades. But in 2012, Pink took a step back from the spotlight after releasing The Truth About Love, contributing to just a few one-off projects in the ensuing years.

But now that’s changing, thanks to the release of “What About Us” on Thursday, the first single off of upcoming album Beautiful Trauma. “What About Us” eschews Pink’s more bombastic tendencies, instead mining the depth of her feelings and showcasing the range of her voice.

“What about us? What about all the broken happy ever afters?” she wonders, as the ballad builds from spare orchestration to beat-backed banger. “We were willing, we came when you called / But man, you fooled us, enough is enough.”

It’s a plaintive, searching song comparable to the 2012 hit “Just Give Me a Reason” — and, in line with the many recent comebacks of pop icons like Kesha, Miley Cyrus, and Katy Perry, it offers a newly streamlined version of the artist’s sound.

Pink has always been honest in her music and ready to address difficult topics, making her extensive back catalogue seem even more prescient today.
Her album Beautiful Trauma drops October 13. 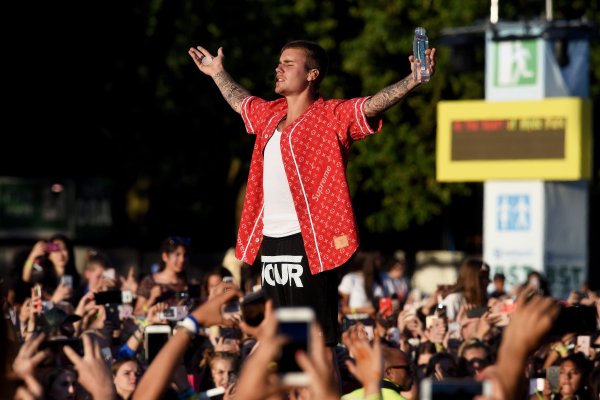 You'll Never Believe Who Just Outed Himself As a Belieber
Next Up: Editor's Pick