Anytime but Now: The Perils of Fighting Last Year's Wars and Pining for Yesterday's Heroes

Left, right and vanishing center, we’ve all been spending too much time in the past lately. On the right, Donald Trump‘s fans yearn for a bygone America — 1950s industries, 1950s masculinity and 1950s demographics. Meanwhile, the left is nostalgic for a more recent past. Either way, we’re losing sight of larger issues, like the planet and our health.

Pete Souza, Barack Obama’s White House photographer, has been teasing everyone for months by posting photos of the Obama years that cunningly contrast with whatever President Trump is currently doing. But on Obama’s birthday, Aug. 4, the O-stalgia went into overdrive. The Internet declared it #BarackObamaDay, and social media was awash in images of the former President being nothing like the current one. There he was hugging his wife, laughing at Angela Merkel’s jokes and speaking in utterly comprehensible, often eloquent sentences.

There are some benefits to our longing. Experts on the subject at the University of Southampton in the U.K. say that while nostalgia is often triggered by adverse events, it creates a sense of belonging and helps us “cope more effectively with the vicissitudes of life.” Democrats know all about vicissitudes. The desire to play videos of Obama singing “Let’s Stay Together” or dancing with Ellen DeGeneres on a loop is understandable. But it’s time to move on, people. He’s not coming back to the White House, and neither is Hillary Clinton for that matter.

It is no longer healing to root through old video clips and tweets for evidence of Trump hypocrisy, vulgarity or mendacity to use as kindling for the social-media pyre. “We told you so” is useless. Facts are out of style. And we won’t know for years which ones really mattered anyway.

Of course, Trump hasn’t gotten over 2016 either. He can’t go a week without talking about the election and Clinton’s emails. Conservative columnists David Brooks and Peggy Noonan are also pining for an un-Trumpian past. Both recently wrote about the dearth of old-fashioned manliness in the White House. Trump should emulate midcentury icons like Gary Cooper, says Noonan, i.e., be quieter and cooler and less whiny, emotional and reactive. (Like, maybe … Obama?) Brooks went all the way back to ancient Greece, writing, “The Greeks took manliness to the next level.”

It’s no wonder we can’t live in the present. Turn on the TV and you’ll see Watergate prosecutors or Bill Clinton prosecutor Ken Starr or any number of officials from previous Administrations dissecting the current almost — constitutional crisis. I’m half-expecting Richard Nixon to appear with some thoughts on the legalities of impeachment. (And when you think about it, wouldn’t he have loved that?) Someone is already channeling his spirit via the wildly popular @Dick_Nixon Twitter handle.

Then there’s cable news’ fixation on anniversaries. It’s impossible to go five days without a news program looking back at the previous five months. We’d just finished evaluating the first 100 days of Trump when a wave of commemorative programming about the first six months began. Brian Williams has taken to starting his nightly news program with phrases like “It’s Day 186 of the Trump Administration.” It’s as if we’re all being held hostage by the 2016 election.

The onslaught of events unfolding in real time is overwhelming enough, but on top of that, this President has a penchant for making news by making things up. Sorting fact from fantasy will require a fleet of biographers. And take a moment to consider how the past year will be told in Trump’s memoirs.

Speaking of memoirs: Hillary Clinton’s What Happened is coming out in September. September? We’re still recovering from “what happened” — Do we have to go back there quite so fast? I’m not ready. Did you know there were women’s marches to mark the six-month anniversary of the Women’s March in January? I can’t imagine what we’re going to do when Nov. 8 arrives. Stage costumed re-enactments at a Trump hotel or two? Place candles at the altar of the Javits Center?

Before that circus starts, let’s take a break. Maybe we should settle into the new season of the bipartisanly popular and unabashedly nostalgic This Is Us before we go back to arguing about what us means. Reliving a train wreck that’s not even over yet is no way to heal. 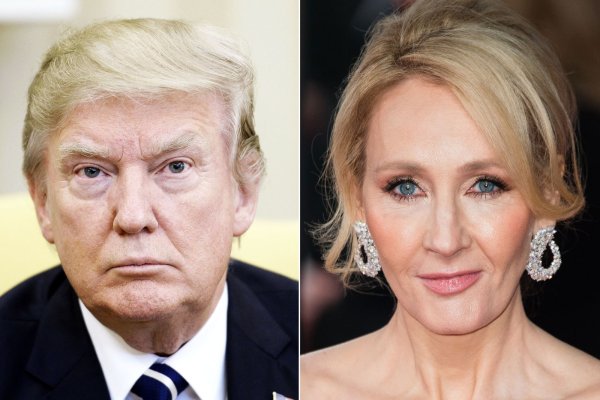 J.K. Rowling Just Used Trump's Own Words Against Him for a Literary Burn
Next Up: Editor's Pick